Saaaaandia, where the wind comes sweeping 'cross the sea …

A novel offshore wind turbine design has been waiting for the right modeling software to come along to help make it a reality, and scientists reckon they've finally built it.

Wind turbines are typically built on rigid towers. The aforementioned offshore design would employ floating platforms able to access wind power in deeper waters, which is currently uneconomic to harvest.

Enter the eggheads at Sandia National Laboratory in the US, who this week announced they have finally coded the software needed to optimize a design for an offshore turbine the lab applied to patent in 2020: a towerless, vertical-axis wind turbine that floats on the surface of the water and uses guy-lines to change the shapes of its blades. 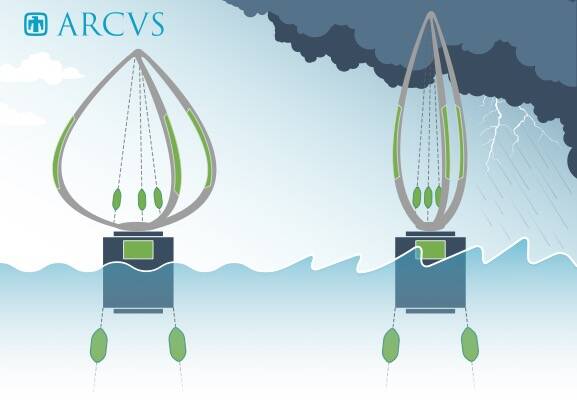 Concepts of Sandia's turbine design in good and bad weather

The software was built at Sandia, with funding from the Department of Energy's ATLANTIS program, which provides support for floating offshore wind turbine technology.

Offshore wind potential is huge, costly and far out to sea

Floating turbines, said Sandia's offshore wind technical lead Brandon Ennis, need a design tool able to simulate wind, waves, blade elasticity, the motion of the platform itself and its controllers. While there are tools out there that do this, Ennis explained they lack elements needed to design and optimize the sort of turbine Sandia was working on.

"It was a big undertaking, but it was essential. There can't be a floating, vertical-axis wind turbine industry without a trusted tool like this," Ennis said.

According to a 2020 report [PDF] from the US Department of the Interior's Bureau of Ocean Energy Management (BOEM), offshore wind projects beyond the 60-meter (197ft) mark are expected to transition from fixed-bottom structures to floating ones, with cost being a major factor.

As Sandia noted, much of the US's offshore wind capability lies in areas where the water is in excess of that limit. The Department of Energy added specificity, saying that 60 percent of offshore capability sits beyond 200 feet, where it "cannot be economically accessed today."

If all the energy in such inaccessible places could be harnessed with floating turbines, the DoE said, we could capture enough energy to meet current US electrical consumption numbers. This would go a long way toward proving the potential of renewable energy to support the US grid – something the DoE is currently trying to test.

"For us the question becomes how do we remove mass and cost from the system while maximizing energy capture," Ennis postulated.

With the software tool ready, the Sandia team can get to work testing and optimizing their design. That will include tweaking things like height and radius. Sandia science communicator Dr Mollie Rappe told The Register that means the size of the turbine could vary, and Sandia notes the final design could differ as well.

In the release, Sandia said that its software tool was capable of modeling and testing designs for any type of vertical-access wind turbine, be it built with a central tower or guylines, meaning it could find a life with private entities working on similar turbines.

When asked if Sandia had plans to release the software to the public, Rappe told us that the lab wasn't likely to make it generally available, citing its niche function and limited use cases. These factors are also unlikely to make the software successful as an open-source project, she said.

That doesn't mean the Lab isn't ready to license the tool. Rappe told us that Sandia is "happy to discuss licensing it to design companies and researchers right now," and said any organizations interested in discussing it should contact Sandia's IP team. ®