The most distant human-made objects, Voyager 1 and 2, are still cruising in interstellar space, more than 12 billion miles from Earth, as NASA today celebrates the 45th year of its longest-operating mission.

Launched in 1977, both spacecraft were sent to explore the outer planets of the solar system. Voyager 2 was the first to leave Earth on August 20, and Voyager 1 followed shortly after on September 5.

Armed with 3.7-meter-wide radio antenna dishes and several instruments to measure different types of electromagnetic radiation, charged particles, photons, and magnetic fields, Voyagers 1 and 2 were designed to detect the rumblings of deep space and beam back this data. By 1989, both spacecraft had between them visited Jupiter, Saturn, Uranus, and Neptune – Voyager 1 hitting up Jupiter and Saturn, and Voyager 2 doing all four – revealing moons and rings around the alien worlds that had never been seen before.

NASA hatched a plan to visit these planets after astronomers realized they were due to line up in a way that would give spacecraft a handy gravity assist to hop to the next planet along, starting with Jupiter.

The US space agency called it The Grand Tour, though its proposal for two sets of twin probes – one of which would study Jupiter, Saturn, and Pluto, and the other Jupiter, Uranus, and Neptune – was shelved for being too costly. The boffins instead dialed back their ambitions to use just one pair of spacecraft, and gave up on the idea of going to Pluto, which was back then still considered the most distant planet in our solar system.

Without that handy alignment of our system's outer four planets – which happens once every 176 years – to assist the flight, the mission to venture that far into the solar system would have been impractical given the extra fuel spacecraft would need to carry to perform the journey. Scientists would also have to spend a lot more time waiting around for them to fly to their next checkpoints.

Voyagers 1 and 2 remain the only human-made objects we're aware of to have reached ice giants Neptune and Uranus, though the probes are mostly celebrated today for flying even further – crossing the Sun's heliosphere and going beyond.

The heliosphere is a giant oval-shaped plasma bubble blown by solar wind that extends more than 120 times the distance between the Sun and the Earth. Passing the heliosphere's border has allowed scientists to measure the Sun's effect on the solar system, and explore what space looks like outside of our star's reach.

"Over the last 45 years, the Voyager missions have been integral in providing this knowledge and have helped change our understanding of the Sun and its influence in ways no other spacecraft can," Nicola Fox, director of the heliophysics division at NASA, said in a statement.

"The heliophysics mission fleet provides invaluable insights into our Sun, from understanding the corona or the outermost part of the Sun's atmosphere, to examining the Sun's impacts throughout the Solar System, including here on Earth, in our atmosphere, and on into interstellar space."

Voyagers 1 and 2 are flying on different trajectories, and exited the heliosphere in 2012 and 2018 respectively – although opinion is divided regarding the exact crossover point. They helped scientists discover that the solar wind blocks about 70 percent of cosmic rays, and redefined the shape and boundaries of the solar system.

"This is the first time we've been able to directly study how a star, our Sun, interacts with the particles and magnetic fields outside our heliosphere, helping scientists understand the local neighborhood between the stars, upending some of the theories about this region, and providing key information for future missions."

Using technology from the 1970s, the Voyager probes each continue to record data using an eight-track tape player with three million times less memory than a typical modern smartphone, and transmits information back to Earth at a speed 38,000 times slower than 5G.

After 45 years, their heyday of collecting prime scientific data is over. NASA has been turning off the instruments one by one to conserve power, so the probes can continue communicating with Earth for as long as possible. Eventually, they'll relay their last messages and go on flying into the depths of space alone.

"We don't know how long the mission will continue, but we can be sure that the spacecraft will provide even more scientific surprises as they travel farther away from the Earth," said Suzanne Dodd, a project manager for Voyager at NASA's JPL.

Although the probes have crossed into the obsidian void beyond the heliosphere, they technically haven't exited the solar system yet. In 300 years the spacecraft will reach the inner edge of the Oort Cloud – a shell containing icy fragments that failed to coalesce into planets when the solar system was formed. It'll take them 100 times longer to wade through the sea of random bric-a-brac to finally make it outside the solar system.

Who knows what will become of humanity by this point. If we go extinct, these two spacecraft carry what could be the best evidence of our existence. Both probes come bearing special gifts to whomever – or whatever – finds them. The probes contain copies of The Golden Record – a disk that holds messages from Earth, carrying sounds such as the chirping of birds and spoken greetings in 55 languages.

Images of family portraits and iconic structures such as the Taj Mahal and various books on anatomy are also stored on the disk. Intelligent aliens should be able to learn about Earth and humanity, if they can get their hands on the record and decipher the symbolic instructions on how to play it. 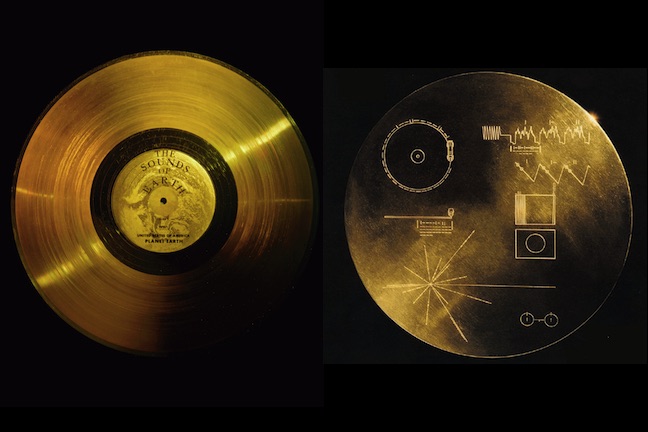 If we are still around, however, then hopefully we will have learned to master space travel and send even more probes to reach deep into interstellar space. Maybe we might have even figured out how to get there ourselves. ®