Hopefully Lucky 13 spots suggested, all on the south pole near water ice

The next US astronauts to set foot on the Moon will find themselves on the summit of a mountain range or the ridge of a crater near the lunar south pole.

NASA has narrowed down the potential landing site to 13 possible regions, all within six degrees of latitude of the south pole. Sunlight fails to reach most of these areas, leaving these spots cold and dark. Crucially, their craters appear to hold hydrogen, water ice, and other pristine volatiles.

The 13 candidate landing sites, mapped in the image below, are geologically diverse. The Malapert Massif, for example, features ranges of mountains near an impact crater, whilst Haworth is a pentagon-shaped crater. NASA may also choose to land on the rims of several other craters of different sizes like Amundsen, measuring over 103 kilometers across, or Haworth, which is about half as wide. 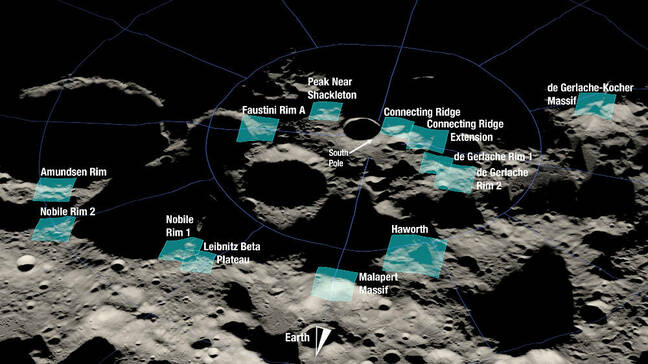 "Selecting these regions means we are one giant leap closer to returning humans to the Moon for the first time since Apollo," said Mark Kirasich, deputy associate administrator for NASA's Artemis Campaign Development Division. "When we do, it will be unlike any mission that's come before as astronauts venture into dark areas previously unexplored by humans and lay the groundwork for future long-term stays."

NASA trawled through decades of data collected by the Lunar Reconnaissance Orbiter to identify the 13 different regions worth visiting. Officials will determine the final destination when the mission advances far enough that they can start considering launch windows more seriously.

They will pick the landing spot depending on the lighting conditions, the slope of the terrain, how easy it will be to communicate with Earth, and consider the different capabilities of its own Space Launch System rocket with the Orion spacecraft, as well as SpaceX's Starship system that's supposed to cross the void to the lunar surface. The 13 different candidate areas are near regions that do receive continuous sunlight over a 6.5-day period and the astronauts will collect lunar regolith samples from permanently shadowed areas, known as cold traps, in the area.

The samples will be packed up and shipped back to Earth for scientists to study the content and distribution of water ice in the south pole, a vital resource previously confirmed by NASA's Moon Mineralogy Mapper (M3) instrument aboard its Chandrayaan-1 spacecraft in 2018. There is water on the north pole as well, but it's not as accessible as further south.

"Developing a blueprint for exploring the solar system means learning how to use resources that are available to us while also preserving their scientific integrity", said Jacob Bleacher, chief exploration scientist for NASA. "Lunar water ice is valuable from a scientific perspective and also as a resource, because from it we can extract oxygen and hydrogen for life support systems and fuel."

You can see NASA's animation of the landing sites below.

"Several of the proposed sites within the regions are located among some of the oldest parts of the Moon, and together with the permanently shadowed regions, provide the opportunity to learn about the history of the Moon through previously unstudied lunar materials," Sarah Noble, Artemis lunar science lead for NASA's Planetary Science Division, added.

The crewed Artemis III mission is not scheduled to launch earlier than 2025, and will carry and man and the first woman to set foot on the lunar surface. ®