PanWriter: Cross-platform writing tool runs on anything and outputs to anything

Sometimes you just want something dead simple that can maybe handle bold, italics, and a hyperlink or two

FOSS Fest PanWriter isn't all that small, but it's simple, clean, and does the bare minimum over a plain text editor.

If you are a programmer there is an almost embarrassing abundance of text editors, from crusty old things from the 1970s that require you to actively cultivate Stockholm Syndrome, to sophisticated modern efforts that try to type your code for you. There are fewer choices if what you write is intended for humans, rather than computers, to read.

Of course, there are word processors, although Microsoft Word has killed most of them off by now. Its single most valuable tool, Outline View, is now a niche feature that the freebie web and Android versions don't bother to include. There's always WordPerfect, the killer app that won't die, if you have the time to learn its UI. LibreOffice is very handy, but also doesn't implement the outliner. 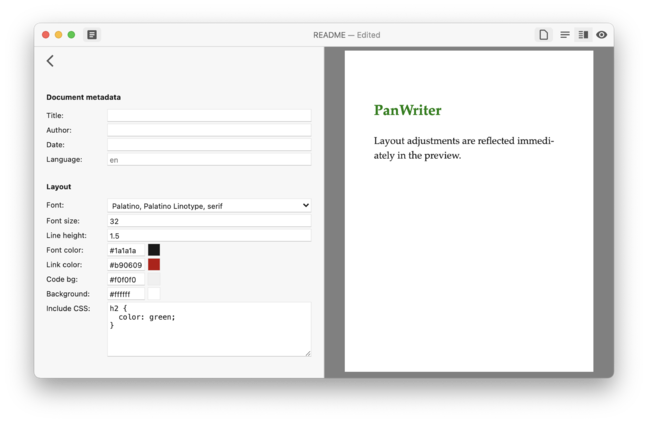 But these are very complex tools, festooned with options to format and print your text, and a gazillion controls to fiddle with. Sometimes you just want something dead simple: words, maybe bold and italics, and hyperlinks because it's the 21st century, and that's about it. That's where free-and-open-source PanWriter comes in (code and license here).

It uses Markdown, which is a sort of lowest-common-denominator markup language. Markdown is readable as plain text with a tiny bit of formatting, but even with practice, it's easy to forget which is bold and which is underline, or which parentheses to use. PanWriter has a handy WYSIWYG live preview that shows you at a glance if you've got it right.

It has no code completion or anything: none of the stuff coders like that gets in a writer's way, no syntax highlighting, no line numbers. In fact it has next to no UI, just a menu bar. It understands the standard keystrokes, such as Ctrl-S to Save, that any CUA editor does. Run it full-screen and all you get is text, which is what you want.

Behind the scenes, it integrates with Pandoc, which means it can output almost any format you could ask, from HTML to RTF to multiple word processor document types. The Reg FOSS desk finds the "Export as rich text to clipboard" feature very handy as it lets the OS sort out what format is best without asking.

There are many rivals out there – for instance, Typora, which has more features, but PanWriter beats it on price: it's free. It's an Electron app, which means it's not small, but then today 130MB isn't all that big. The Linux version comes as an AppImage, a single file that runs on any distro.

Without bloating the app with extra features, the one thing we'd like to see is an integrated wordcount, but otherwise, even at the current version 0.8.4, PanWriter is close to perfect. ®

Decent upgrade from older versions, essential if you're still on OpenOffice
Applications3 Feb 2023 | 17