Tesla owner Brandon Dalaly has seemingly implanted a chip in his hand that he uses to unlock his car, among other things.

And as one does after hand hacking, he tweeted about his unlocked achievement to Tesla honcho Elon Musk, nexus of stonk enthusiasm and perhaps Twitter's next owner.

"Finally decided to take my phone key issues into my own hands... literally," he wrote. "Tesla key chip implant." 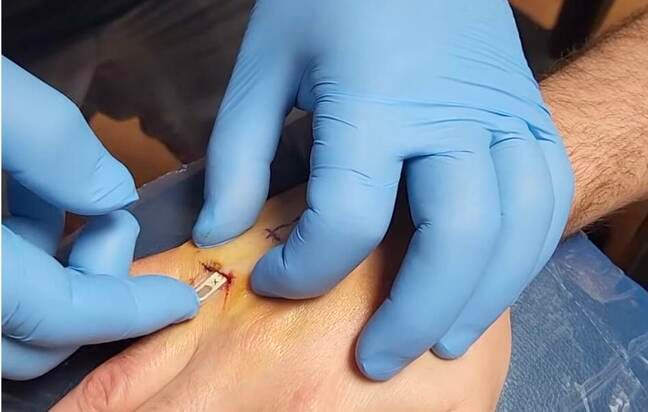 Elon getting under your skin again ... Chip is inserted into Dalaly's hand
Source: YouTube

"For me it comes in handy (no pun intended) because my phone's Bluetooth power management is so aggressive that it doesn't always unlock the car," explained Dalaly, via Twitter. "So this helps in those instances."

The chip, according to a report in Teslarati by Johnna Crider – long Tesla stock, her disclaimer says – is a VivoKey Apex, a contactless NFC chip that can be used for a variety of wireless interactions.

Dalaly hammers this point home several times in his Twitter thread. The chip, he said, can be paired to any Tesla that uses a contactless card and can do other things like store data, provide OTP 2FA or access to crypto wallets, and will eventually be usable for credit card transactions. Unlocking his Tesla is just one of many benefits he accrues from slipping a chip under his skin.

I really don't get all the hate. I know chip implants are not for everyone, just like tattoos or other piercings, but I'm into it

The VivoKey is apparently Dalaly's second chipping. The Tesla key vessel expressed gratitude toward those not passing judgment on his body-alteration – which isn't nearly so extreme as some.

"I really don't get all the hate," he said in a thank you to one sympathetic individual who derided critics as morons. "I know chip implants are not for everyone, just like tattoos or other piercings, but I'm into it. Both my chips are used for multiple things, and I don't regret them in the slightest."

(Do we have to remind people of Captain Cyborg, a UK academic who embedded electronics in his arm to draw attention to ... well, we're not quite sure?)

The Twitter commentariat covered all the expected questions – a warning about the "mark of the beast," mulling the possibility of theft-by-amputation (which has been reported), and pondering whether there might not be easier, less invasive options, like maybe getting a better phone.

Despite unconvincingly professing regret for publicly promoting his biohacking on a social media website (and trying to attract the attention of Musk and his legion of engagement-boosting Twitter followers), Dalaly has dealt with doubters in stride.

To an aghast protector of religious mores, he replied, "I'm not a Christian, don't believe in hell and don't believe the Bible's 'mark of the beast' excerpts had anything to do with subdermal piercings that didn't exist till 2000 years later. But to each their own."

He also issued a disclaimer to deter arm robbery (pun intended). "I should probably state I currently have no money on this, so please no one chop my hand off...thanks," he said.

The Register asked the San Francisco Police Department how it would handle a scenario in which an individual had implanted an item like a key that would normally be subject to seizure during an arrest.

"We do not currently have a policy in place for a situation such as this," an SFPD spokesperson replied.

It's sad such shenanigans still turn heads and fire up the social media monetization machine. We could after all be chattering about jabbing chips into monkey's brains (at an Elon Musk-run company, coincidentally) in the hope of human betterment. But when monkeys die during the development of these procedures, that hardly lends itself to shitposts and giggles.

Chipping is no longer a novelty – there was a Tesla key implantation in 2019 – but it's unlikely to ever have broad appeal outside of meaningful medical applications, despite promotional efforts to convince people otherwise. In 2017, Wisconsin-based vending machine biz Three Square Market offered employees the option to get chipped to make in-house vending machine purchases.

In 2018, the biz celebrated with a press release stating that the company "is making good on its mission to change the world."

"We are well down the path of bringing medical solutions into a reality that will create the Internet of People," said 32M president Patrick McMullan in a statement at the time.

The Register called Three Square Market (32M) on Wednesday to ask how the company's employee chipping program is going. "We're not doing that anymore," said the person who answered the phone. ®