Officials from the manufacturing hub of Chongqing notified factories on Wednesday that mandated power cuts in the municipality were extended until further notice, affecting both PC and Apple suppliers. 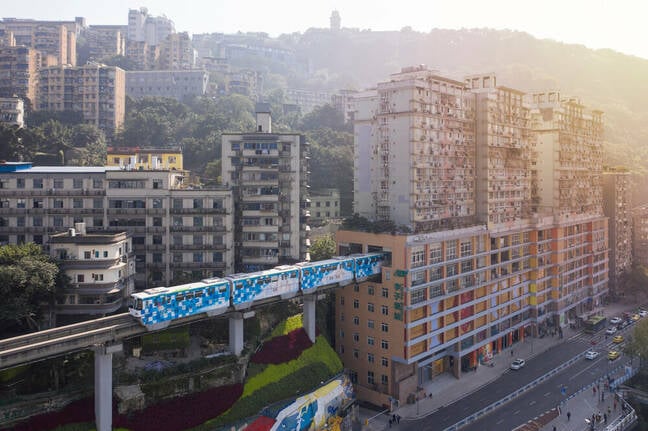 Train at Liziba station in Chongqing passes through a building

The power cuts were originally ordered from August 15 to August 20 in 19 Chonging and Sichuan area cities, as a measure to prioritize electrical grid resources for residents while China experienced an unprecedented heatwave. The power rationing was eventually extended to Thursday August 24, before Chongqing's mandate was made indefinite and neighboring Sichuan reportedly extended to Saturday.

The heatwave has been joined by sweeping wildfires, leaving residents relying on candlelight to see and blocks of ice to keep cool. In that environment, manufacturing lines just have to take a backseat.

Power cut or not, the hotpot must go on! pic.twitter.com/JZH823sbXG

Sichuan-based General Interface Solutions said in a regulatory filing with the Taiwan Stock Exchange on Monday that it was complying with government requests, and had adopted off-site backup to compensate for adjusted production and operations. The company provides touchscreens and other components for mobile phones, wearable devices, tablets and notebooks, and has been listed as an Apple supplier in the past.

Fellow Apple supplier Foxconn is reportedly operating at "low levels." Foxconn told The Register the impact is currently "not significant."

Quanta, Compal and Inventec all also have factories in affected cities. The Reg has reached out to all three manufacturers and will update this story if any provide substantial information.

So far 2022 has been marred by numerous factory closures in China. Factories around Shanghai were forced to shut down earlier this year due to coronavirus outbreaks – although many companies were able to implement "closed loop" systems whereby essential workers were housed onsite. Such a mitigation strategy is impossible when the power is down.

Discontentment among global businesses in China is brewing this year, and many are already issuing predictions on where operations might relocate.

Indian high-tech manufacturing may be the big winner as tech companies around the world are rethinking their heavy reliance on China’s supply chain. Here’s a look at the tech firms that have invested in India over the past few years: $AAPL $GOOGL $AMZN $DELL pic.twitter.com/boIjlq8P8W

Foxconn, Samsung, Microsoft, Intel and LG all have a presence in Vietnam, which serves as an important hub for tech manufacturing. The country's prime minister, Pham Minh, has expressed a desire for an even greater industry footprint.

This month, Foxconn signed an MOU to lease 50.5 hectares of land to build a factory in the northern Vietnam province of Bac Giang, as reports hit that it was in talks to move Apple Watches and MacBooks out of China for the first time.

The factory is slated to employ an extra 30,000 workers and require around $300 million in investment. ®

Updated Floats over missile silos, shooting it down ruled more dangerous than whatever it's up to
Security3 Feb 2023 | 117