Mobilises the Pi nicely but also frustrates in a few ways

Desktop Tourism The Raspberry Pi is rightly celebrated as a very clever feat of design. But I've always found Pi-based machines hard to work with because connecting a Pi to the peripherals needed to make it useful creates a tangle of wires.

I once acquired an L-shaped USB cable to tidy up a Pi-based 3.5-inch touch screen alarm clock. The result was no more messy than other appliances that use a single power cord.

But building the machine meant a nasty tangle of cables snaking to my monitor, wired network, and input devices.

Which is why I found myself very interested in the CrowPi-L – a $220 laptop chassis designed to house a Raspberry Pi 4B. The machine includes an 11.6-inch 1366x768 screen and a touchpad. But the real magic is inside, where you'll find a tray designed to house the Pi and connect to its ports so that they appear on the outside of a machine just like ports on any other laptop. Elecrow will install a Pi and charge you for it, or you can BYO and DIY.

Some of the Pi's ports line up to holes on the left-hand side of the chassis, others are piped through the machine to its right thanks to cunningly concealed connectors and extenders. There's also a 5000mAh battery tucked away inside, to make the Pi truly portable. A nifty inclusion is a double-sided microSD card tray that includes a switch so you can choose which disk to boot from. You'll need to open the machine to find that switch, but it's a two-second job.

The machine looks like a netbook – the small and modestly-specced PCs that were popular in the mid-2000s – albeit a chunky netbook made from slightly tatty plastic, and with some rustic aspects like a cable that emerges on the exterior to connect the laptop screen.

Promised battery life is three hours and I never found a need to charge before that time elapsed.

Desktop tourism? PCs and alternative devices have increasingly diversified into myriad and marvellous forms, so I've decided that in 2022 I'll use a different one each month and share the experience. This article is the latest part in this series of mini reviews.

The keyboard is sub-par, with shallow travel and a nasty feel. You won't write, or code, at speed on this machine.

The touchpad is a terrible mistake. It is tiny and placed to the top right of the keyboard. Twenty years of muscle memory tells me that touchpads are centered below the keyboard, so this positioning needlessly frustrates. Pity the left-handed.

Thankfully Elecrow ships the machine with a wireless mouse, although the choice of using a proprietary USB receiver instead of a Bluetooth rodent exposed the machine’s tight tolerances. I needed to make quite an effort to connect the mouse's USB-A wireless receiver. The provided 40-pin GPIO cable also needed a solid shove.

Not quite knowing if you've connected a device, or damaged its host, is a part of the CrowPi-L experience.

But once it is up and running it does a job. We've assessed the rPi 4 before and noted it's nicely snappy, so the CrowPi-L is therefore capable of making you passably mobile and productive – if you can put up with the keyboard, dim and small screen, and three hours of battery life is enough for your needs.

Making the Pi portable is only one of the suggested roles for the device. Elecrow also offers the “Crowtail Starter Kit” – a chocolate box full of electronic components that can be plugged into a base shield offering 16 four-pin grove connectors that hooks up to the rPi's General Purpose Input Output port with a short ribbon cable.

Accompanying tutorials offer procedures for getting the various components working.

The couple of tutorials I tested quickly produced results with the I2C LCD and RGB modules. I look forward to moving into more advanced projects.

The starter kit is sold separately and there appears to be no reason you couldn't run it with any other Raspberry Pi. Even the Raspberry Pi 400 – the Pi foundation's Pi-baked-into-a-keyboard that does just as good a job as the CrowPi-L in terms of tidying up a Pi-powered desktop. 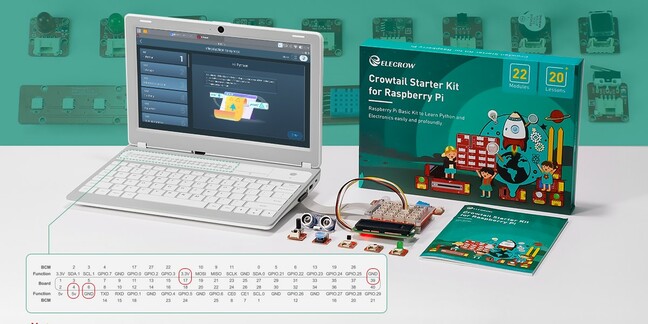 If you don't need a mobile Pi, the 400's superior keyboard probably makes it a better option if you want an uncluttered everyday Pi experience.

But if you're after a simple way to make a Pi portable, it's a fine option. And if you want to deploy the Pi in a classroom or a lab to impart Python knowledge, this machine would be ideal. ®