Big changes are afoot in a forthcoming version, but they're not fully visible yet

A leading Chinese Linux vendor is polishing what may be its last Debian-based release, and preparing for the move to becoming a fully independent distro with its own new package format, Linglong.

Deepin, the most internationally visible Chinese Linux distribution, has put out two new versions: the latest release of its existing stable version, Deepin 20.6, and a preview of the forthcoming new major release, Deepin 23.

Back in April, we looked at Deepin 20.5, the previous release. This version is a relatively minor update with some components refreshed: kernel 5.15, including native NTFS support, and the option of kernel 5.17; version 510 of the Nvidia binary graphics driver; and Qt version 5.15. Issues in the Deepin Desktop Environment (DDE) and various accessory programs have been fixed, and the system-wide search tool has been improved. 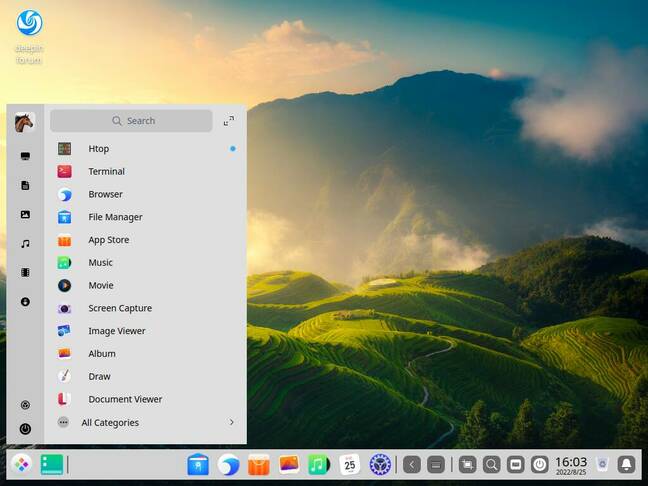 Deepin 20.06 retains its bright, colorful desktop, combining elements of Windows 7, 10 and now 11 too

All these things are relatively routine stuff for a minor version of any Linux distribution, and there's nothing wrong with that. The relevance is that although Deepin doesn't get a lot of coverage in the West, it certainly shows that Deepin has noteworthy traction, and that the company is listening to its users and actively maintaining the software.

We tried it in a VM and while it displays a message that advises against that, with some coaxing, it does work, and it's as pretty as ever.

The forthcoming major release version is rather more significant, with a new packaging format and a planned move to become a fully independent distro.

Deepin has been based on Debian stable for some years after switching from Ubuntu in 2015. In our opinion, that's a significant advantage: it makes it easy to add additional software, including drivers, and the Deepin Software Store is – understandably – skewed towards Chinese apps, sites and services, some of which are of little relevance to users in other countries.

Deepin is the free international version of UOS, a Chinese-language family of distros from Chinese vendor Tongxin UnionTech. There isn't much info on UOS in English, as its Wikipedia page shows.

Now the company has announced that this will change:

It is expected to be built from the Linux kernel and other open-source components without relying on the communities of upstream distributions, and to provide basic services and the foundation for the establishment of an independent upstream.

Alongside the move to becoming a self-contained distro, Deepin has also announced its own packaging format, Linglong. UOS has started to publish some information about the format, along with an app store.

There isn't a lot of detail so far, but the promised benefits put us in mind of both Snap and Flatpak, such as app sandboxing and cross-distro compatibility. However, the announcement also talks about improved ease of packaging, incremental updates, and package layering to reduce the size of app bundles. 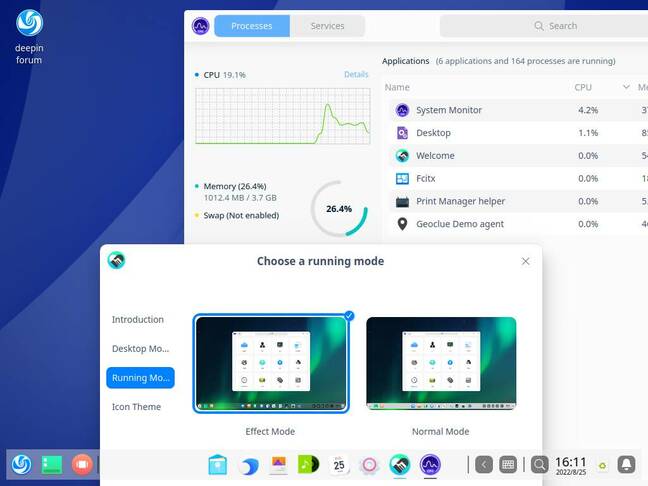 So far, Deepin 23 doesn't look very different, but this version lets you enable effects in a VM – for example, the transparent floating panel

We installed the preview version of Deepin 23 in a VM, and so far this test release is still based on Debian. For instance, we were able to install DKMS, which allowed us to install VirtualBox's guest additions.

It's not inconceivable that a new format could surpass and supersede all the existing cross-distro formats as they all have well-documented drawbacks: Snap works on both desktops and servers, but there's only one official Snap store, and the multiple loop-mounts slow down system startup. If the underlying file system supports it, Flatpak has deduplication and so uses less disk space, but it's desktop-only. AppImage is the easiest, but it's up to apps to manage their own updates.

It wouldn't be trivial to overcome all of these in one tool, but it's not impossible and it would certainly be welcome. This leaves the issue of whether Western vendors would trust such a fundamental tool if it were to originate in the People's Republic. In the past, some commentators in the West have raised privacy concerns, which the company denied. ®

Decent upgrade from older versions, essential if you're still on OpenOffice
Applications3 Feb 2023 | 23