VMware Explore VMware customers are waiting to see what changes Broadcom will bring to the virtualization giant, with many optimistic the impact will be positive.

In more than a dozen conversations with customers and partners at the VMware Explore conference this week in San Francisco, all of whom were not authorized to speak to media so requested we do not use their names, The Register found little of the worry about Broadcom’s proposed takeover of the virtualization giant that we found when visiting a VMware user group meeting the week after the deal was announced.

Some pessimism persisted in the interviews we conducted today. One interviewee, who works for a government agency outside the USA, said Broadcom is “a pain in the ass to work with” and is therefore not looking forward to VMware being acquired.

But others expressed hope that Broadcom will improve VMware, citing a decline in the quality of product support offered by the virtualization giant. Software quality was also raised as an issue by a user in the casino industry who hoped Broadcom could improve.

One of the folks we chatted to expressed admiration for Broadcom. “They make better NICs than Intel, and you can actually order them,” he said. This user, who works for an energy company, also expressed discomfort at VMware’s shift to subscription services, saying they effectively increase prices and require not-entirely-wanted migration efforts.

Some have decided not to waste energy worrying about any changes until they happen. One interviewee said he is “dimly aware” of the looming acquisition, and rated the conference as a typical effort by VMware during which the vSphere maker impressed him with its evolving portfolio.

A senior exec at a VMware partner specializing in desktop-as-a-service told us that it too is in wait-and-see mode. This partner is aware of Broadcom Software’s history of sloughing off partners as it pursues direct relationships with large customers, and said if Broadcom does this again, his company will “need to be nimble.” The partner hopes, however, that VMware maintains its current stance towards partners (not least because the vendor’s desktop-as-a-service offerings have delivered very pleasantly busy years).

VMware mostly glossed over the impact of the proposed acquisition at the event though The Register was today able to ask CEO Raghu Raghuram why those who have had poor experiences after Broadcom’s acquisition of Symantec and CA should not fear the transaction.

Raghuram acknowledged that when VMware customers speak with Broadcom CEO Hock Tan they express concerns about the deal. He said he and Tan address those worries by saying Broadcom will not use “the same approach taken with Symantec and CA because of where those companies were in their lifecycle. They were very, very mature companies with little prospect of growth in the categories they were in, and the revenue was mostly focused on 400 or so customers.

“So they took the approach of effectively managing for cashflow.”

But Raghuram says Broadcom’s silicon business constantly innovates to broaden its customer base, and that approach will be used on VMware.

“The first question Broadcom asks is: ‘What is the franchise to be built here? Can this company they are acquiring become a leader over the next decade? What does it take? Does it fit the financial profile we are comfortable with?’”

“That is why this will be different,” Raghuram said. 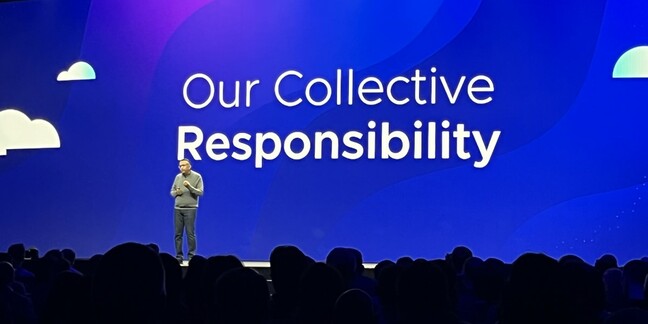 VMware’s CEO said he has advised partners to watch, wait, and engage directly with Broadcom to discuss concerns. Raghuram added that the deal is not likely to close for several months, so stakeholders have time to observe what emerges from the deal and then decide accordingly.

It’s lazy journalism to end a story with platitudes about how “time will tell.” But based on your correspondent’s encounters at VMware Explore today, that’s VMware’s position, and also a stance customers are largely happy with for now.

Although it should be noted there’s no obvious alternative to that position. ®

“There is uncertainty,” he added. “That could be a tailwind for us.”

Nutanix has made its own tailwinds of late: the company today posted Q4 revenue of $385.5 million, a one percent decline year over year. But the company delivered free cashflow of $23.2 million for the quarter, the first time it has done so since moving to software subscriptions. That outcome contributed to full year free cashflow of $18.5 million, a considerable turnaround from FY 21’s -$185.5 million.