The oxygen-generator onboard NASA's Perseverance rover, which has repeatedly extracted the vital gas from the Martian atmosphere in tests, has been detailed in a scientific paper published this week.

About 95 percent of the Martian atmosphere is made up of carbon dioxide, and very little is oxygen. If we're to have long-term manned missions on the planet, we need to make oxygen right there from the CO2 as that's much more efficient than routinely sending it in tanks all the way from Earth. Oxygen is needed for breathing, rocket fuel, and more.

Perseverance's oxygen-generator, made by a team led by MIT, is named the Mars Oxygen In-Situ Resource Utilization Experiment, or MOXIE for short. It started producing oxygen in April last year from the Martian carbon dioxide at a rate of six grams per hour, enough to give an astronaut a little over 10 minutes to breathe.

"This is a critical first step at converting carbon dioxide to oxygen on Mars," said Jim Reuter, one of the US space agency's associate administrators, at the time.

"The results from this technology demonstration are full of promise as we move toward our goal of one day seeing humans on Mars. Oxygen isn't just the stuff we breathe. Rocketry depends on oxygen, and future explorers will depend on producing propellant on Mars to make the trip home."

Now MOXIE's designers are claiming success after getting the generator to perform a series of tests over multiple Martian seasons, and have issued a paper all about it in Sciences Advances. Check it out for the full ins and outs of this technology demonstration.

"This is the first demonstration of actually using resources on the surface of another planetary body, and transforming them chemically into something that would be useful for a human mission," MOXIE's deputy principal investigator Jeffrey Hoffman, a professor at MIT's Department of Aeronautics and Astronautics, said in a statement. "It's historic in that sense."

Hoffman and his colleagues analyzed MOXIE's performance over seven experimental runs last year, yielding as much as six grams per hour each time, or about as much as a small tree on Earth.

MOXIE works by filtering the Martian air to get rid of dust then compressing and heating it to 800°C (1,470°F). The carbon dioxide is passed over a nickel-based catalyzed cathode, where it is split into oxygen ions and carbon monoxide. A ceramic electrolyte helps pass the oxygen ions to an anode, where they combine to make breathable diatomic oxygen. MOXIE then measures the quantity and purity of the gases before they're released into the Martian atmosphere.

It takes quite a while to create oxygen. MOXIE takes two hours to warm up, and another hour to complete the solid oxide electrolysis process, before it needs to be powered back down. Scientists experimented with switching on MOXIE at different times of the day to see how the temperature affected the planet's atmosphere and the instrument's oxygen production.

"The atmosphere of Mars is far more variable than Earth," Hoffman explained. "The density of the air can vary by a factor of two through the year, and the temperature can vary by 100 degrees. One objective is to show we can run in all seasons." 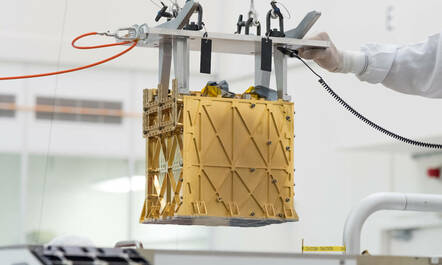 The toaster-sized MOXIE instrument before its trip to Mars ... Image Credit: NASA/JPL-Caltech

The data so far shows that MOXIE can make oxygen at almost any time of the Martian day, but the team has not tested it at dusk or dawn when the temperature changes are most drastic yet.

They will also crank up MOXIE's settings to push it into making more oxygen, and monitor where the system might start to break down from wear and tear. It has enough power to theoretically create up to 12 grams of oxygen per hour.

"The next run coming up will be during the highest density of the year, and we just want to make as much oxygen as we can," Michael Hecht, principal investigator of the MOXIE mission at MIT's Haystack Observatory, said. "So we'll set everything as high as we dare, and let it run as long as we can."

Another team of researchers have built a device that uses plasma to extract oxygen from carbon dioxide; it was capable of producing 14 grams of oxygen an hour.

For human missions to Mars, NASA envisages sending these kinds of devices well ahead of time so that they can generate reserves of oxygen on the Red Planet so that it's ready to support future manned missions.

"To support a human mission to Mars, we have to bring a lot of stuff from Earth, like computers, spacesuits, and habitats," Hoffman said. "But dumb old oxygen? If you can make it there, go for it — you're way ahead of the game." ®