Underwater datacenter will open for business this year

A company called Subsea Cloud is planning to have a commercially available undersea datacenter operating off the coast of the US before the end of 2022, with other deployments planned for the Gulf of Mexico and the North Sea.

Subsea, which says it has already deployed its technology with "a friendly government faction," plans to put its first commercial pod into the water before the end of this year near Port Angeles, Washington.

The company claims that placing its datacenter modules underwater can reduce power consumption and carbon dioxide emissions by 40 percent, as well as lowering latency by allowing the datacenter to be located closer to metropolitan areas, many of which are located near the coast.

However, according to Subsea founder Maxie Reynolds, it can also deploy 1MW of capacity for as much as 90 percent less cost than it takes to get 1MW up and running at a land-based facility. 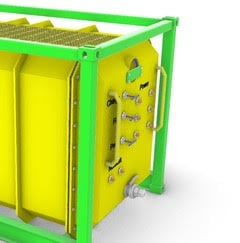 An illustration showing one of its commercial pods. Pic provided by Subsea

"The savings are the result of a smaller bill of materials, and less complexities in terms of deployment and maintenance," Reynolds told us. "It's complex and costly to put in the infrastructure in metropolitan areas, and in rural areas too: there are land rights and permits to consider and labor is slower and can be more expensive."

The Port Angeles deployment, known as Jules Verne, will comprise one 20ft pod, which is similar in size and dimensions to a standard 20-foot shipping container (a TEU or Twenty-foot Equivalent Unit). Inside, there is space for about 16 datacenter racks accommodating about 800 servers, according to Subsea. Additional capacity, if and when required, is delivered by adding another pod. The pod-to-shore link in this deployment provides a 100Gbps connection.

As it is a commercial deployment, Jules Verne will be open for any prospective clients or partners to come and check it out, virtually or otherwise, according to Reynolds. It will be sited in shallow water, visible from the port, whereas the Njord01 pod in the Gulf of Mexico and the Manannan pod in the North Sea are expected to be deeper, at 700-900ft and 600-700ft respectively.

However, Jules Verne will not likely be used by many customers, as Subsea expects to use it mostly to demonstrate compliance to organizations and advocates that will be inspecting the pod and site, and this may disrupt client operations.

"We are in talks with two of the well-known hyperscalers, though, so it's still a little up in the air," Reynolds said.

The Subsea pods are kept cool by being immersed in water, which is one reason for the reduced power and CO2 emissions. Inside, the servers are also immersed in a dielectric coolant, which conducts heat but not electricity. However, the Subsea pods are designed to passively disperse the heat, rather than using pumps as is typical in submersion cooling in land-based datacenters.

But what happens if something goes wrong, or a customer wants to replace their servers? According to Subsea, customers can schedule periodic maintenance, including server replacement, and the company says that would take 4-16 hours for a team to get to the site, bring up the required pod(s), and replace any equipment.

The viability of underwater datacenters has already been demonstrated by Microsoft, which has deployed several over the past decade as part of its Project Natick experiment. The most recent was recovered from the seabed off the Scottish Orkney islands in 2020, and contained 12 racks with 864 servers. Unlike the Subsea pods, the Project Natick enclosure was filled with nitrogen.

Microsoft reported that only a "handful" of servers failed during the course of its experiment, and Subsea expects its datacenters to require less maintenance due to the reduced risk of environmental contamination like dust and debris and reduced thermal shock.

Subsea said it plans to colocate datacenters at sites offering various types of renewable energy infrastructure, and that it aims for its datacenters to consuming renewable power only by 2026. ®

Miniature nuclear reactors could be the answer to sustainable datacenter growth