Looks like the bird site didn't need Musk's money to get the feature added, after all

Twitter's long-awaited edit button is being tested internally, and in the coming weeks will be available to Twitter Blue subscribers before a wider rollout, the social media company said today.

Tweet editing, which Twitter said is its most requested feature, will have restrictions, however: Tweets can only be edited inside a 30-minute window following their publication, they'll be timestamped and labeled as edited, and will include an edit history where anyone can see older versions of the tweet.

Per Twitter, those limitations are important and intentional: "They help protect the integrity of the conversation and create a publicly accessible record of what was said."

The social media company said it's using small groups to test the new feature so that it can incorporate feedback, make changes and gauge how Twitter users may misuse editing capabilities. "You can never be too careful," Twitter said in its blog post. 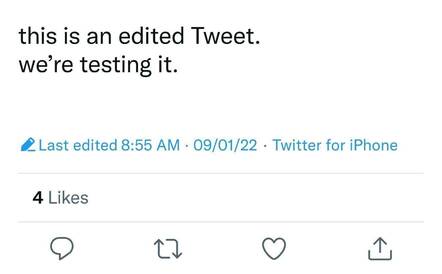 Paying Twitter users already have experience with an edit-like feature through Twitter Blue that allows them to undo tweets for a short time – either 5, 10, 20 or 60 seconds after posting – though Twitter makes clear "it's not an edit button." Other features of the $4.99/month subscription service include ad-free articles, bookmark folders, a reader view and other quality-of-life elements.

Twitter Blue users can expect to get access to the full-fledged (test) tweet editing button later this month, Twitter said. The test "will be localized to a single country at first and expand as we learn and observe how people use Edit Tweet," the company said.

An edit button was one of the features Elon Musk said he wanted to add to Twitter after he completed his purchase of the company, which he announced his intention of earlier this year. Musk has repeatedly tried to back out of the sale since then, most recently because of a Twitter whistleblower's allegations of security and privacy shortcomings at the company. ®