Opinion The sight of a former executive laying into their old company is rarely less than delicious. And when that company is Microsoft, the exec is head of user experience, and the complaint is about the solid slab of sadness that is the Windows 11 Start menu? This calls for not just regular salted popcorn, but truffle-oil popcorn on a silver platter carried in by a butler.

Yet ex-Rex of UX Jensen Harris, who also confesses to being the murderer of the Windows startup sound, is, if anything, far too sparing in his regal condemnations. In the 20 years since the Start menu first appeared, it has changed many times, but arguably to little user benefit. It isn't hard to find videos of youngsters barely older than the button reacting with growing pleasure as they click around the Windows 95 desktop.

That's because the desktop metaphor was basically done. By the time it came out, Windows 95 was the beneficiary of 20 years of evolution in graphical user interfaces, first introduced in the Xerox Alto of 1973. That supplemented – but did not replace – the text terminal, which would be familiar to teletype operators of the 1920s. Teletypes themselves were inheritors of the QWERTY keyboard of 1873. Some 150 years later, as you compose your emails or write your jeremiad against Windows, that's basically what you're using. Stability in UX is not a bad thing. 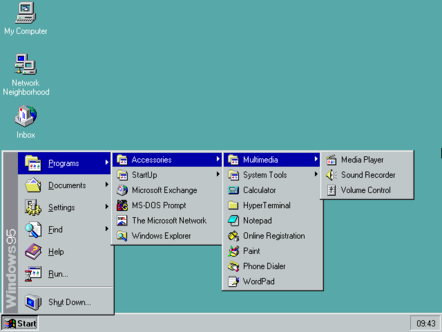 Constantly messing around with UX is a bad thing, however. All you need is for it to find resources, start software, control your computer, and arrange things to your liking. Windows 95 did that perfectly well, as did Apple's System 7. By rights the GUI should have settled down then, like every UI before it.

Innovation! Differentiation! The operation of the market! Excuses, not reasons. Nobody is served by having to relearn which corner of a window has the control buttons every time they change platform. Nobody is delighted by having to play hunt-the-menu. None cry out in delight when a computer silently stashes a downloaded app who knows where instead of just putting it on the desktop where it can be moved wherever the user wishes. From version to version, from OS to OS, and in the case of Linux seemingly from moment to moment, these things shift and shimmer.

As for innovation, put it in the apps. Put it in the services. Put it under the hood. A single stable desktop would be as detrimental to innovation as USB-C. Apple has special ownership of that nonsense: USB-C has demonstrated that a single connector liberates good ideas, not stifles them. The desktop should be the cognitive USB-C, not a throwback to the days when every device had its own incompatible charger and data connectors.

The reason for the unholy UX mess with no signs of converging is, of course, marketing, and the reason they get away with it is because of one of the greatest con jobs in IT. We have been taught, and never question, the near-abolition of customer support by the OS makers. Unless you pay extra, you cannot pick up the phone or email Apple, Microsoft, and especially not Linux, to ask basic questions. You cannot say to Apple, "Which bit of the Finder actually finds things?" You cannot complain to Microsoft that File Manager thinks "Share with Skype" is the second most important file operation, right after Open. You cannot pick up a phone to Ubuntu and scream "Stop! Stop! In God's name, stop!"

The OS companies have insulated themselves from user pain, the sort that soaks up customer service resources and actually costs them money. Go to the forums, thou sluggard, and try to work out which version the answers you find are actually about. They have created their own walled poison gardens where they can mess around according to the will of whatever internal faction is carrying the day, sentencing billions to useless frustration, cognitive load, lost work, and lost lives. It is frankly criminal.

So keep your frills and fantasies, if you must, but include an alternative. Just one, and it should be the same one across the industry, like the keyboard almost is. Pick the best bits of Windows 95 and System 7. Different styles are fine, extensibility is fine – providing it's standard and portable. Hand it out, then leave it the hell alone. Guess what we'll all be using in a year's time?

No, OS people, you will no longer be able to parade your latest unwanted schemes and fancies at us. You'll have to make them worth our while finding and adopting them. Then we can all concentrate on getting the damn work done. Isn't that the idea? ®