We guess new chips are only for Pros

The main attraction was the iPhone 14. It's the first new iPhone since the short-lived 5C was introduced in 2013 not to launch alongside a new chip. The iPhone 14 will be powered by last year’s A15 system-on-chip, albeit a slightly faster one with a fifth GPU core that was used in the iPhone 13 Pro and Pro Max.

Apple is instead saving its flagship silicon for its iPhone Pro line. The US giant Wednesday showed off its top-of-the-range A16 Bionic chip, which will be used in the iPhone 14 Pro and Pro Max; Apple is rather nebulously claiming this hardware is 40 percent faster than the competition.

A closer inspection reveals a far more iterative design than the one painted by Apple execs onstage at the iPhone launch event. The A16 Bionic features the same layout as the A15 Bionic of two high-performance CPU cores and four efficiency cores. Meanwhile, the GPU, an area that receives a lot of attention at last year’s iPhone launch event, offers the same number of cores as its A15 Bionic predecessor: five.

With that said, at least according to Greg Joswick, SVP of worldwide marketing at Apple, the A16 Bionic chip is still an improvement over the equivalent A15, with the high-performance cores using 20 percent less power for the same performance. 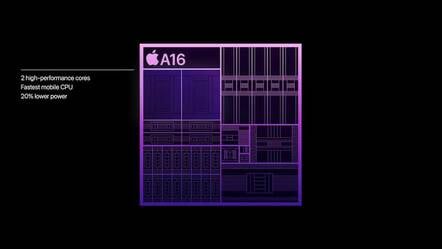 Apple's slide of the A16 chip

Apple does say it has upgraded the A16’s 16-core Neural Engine, which it says delivers roughly 17 trillion operations per second (TOPS). That’s a modest performance boost over the 15.8 TOPS offered by the A15.

The improvements to memory bandwidth also suggest the A16 may be using LPDDR5. Apple made identical claims this spring when it introduced the M2 in the new updated MacBook Air. It was later found that the memory bandwidth gains were the result of a switch to faster LPDDR5 memory.

“With A16, we focused on three important areas, power efficiency, display, and camera,” Joswick explained on stage.

“This engine enables a 1Hz refresh rate, always on capability, higher-peak brightness, and the advanced antialiasing that makes dynamic island animations so incredibly smooth,” Joswick said. “The image-signal processor was designed to support a new generation of technology that provides our most powerful pro camera system ever.”

iPhones aside, it’s hard deny one of the biggest launches of this week’s event was Apple’s larger Apple Watch Ultra.

The company’s eighth-gen Apple Watches dominated roughly half the company’s 1.5-hour presentation, and yet despite all the impressive new capabilities packed into its wrist-mounted computers, Apple Silicon hardly received more than a passing mention.

Executives rather quietly touched on the “new” S8 system-in-a-package, found in all three of its new Apple Watch models, when introducing the less expensive SE model. Apple claimed this chip is 20 percent faster than the one found in the previous generation SE, which used the S5 processor from the Apple Watch 5.

This leads us believe that the S8 may be a rebadged version of the S6 that launched alongside the Apple Watch Series 6. Apple pulled a similar move last year with the Series 7’s S7, which was later revealed to use the same die as its predecessor.

Further reinforcing the idea is a press release from 2020 where Apple claimed its S6 was 20 percent faster than the outgoing S5.

We’ve reached out to Apple for comment; we’ll let you know what we hear back. 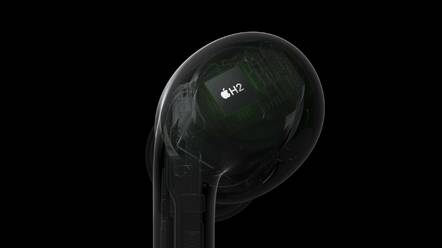 Apple’s newly refreshed Airpods Pro are definitely rocking some new silicon. During the event, executives touted the H2 processor which is powering many of the headset’s headline features.

The updated gadget promises features such as personalized spatial audio, a twofold improvement in noise cancellation, and a new transparency mode that can automatically cancel out high-DB sounds, such as those associated with construction.

“H2 delivers advanced computational audio previously unable to run on a device of this size. This combined with optimizing the placement of the acoustic bands and microphones now enables up to double the amount of noise cancelled over the original AirPods pro,” we were told during the launch.

In addition to new features, Apple claims the H2 chip is also more efficient, enabling the Airpods Pro to last up to 33 percent longer than their predecessors. ®