Or if you're looking for something lower power, it can be had with a pentacore Celeron

If you’ve ever thought to yourself these single board computers (SBC) could use a few more cores, Asus’ Aaeon latest system might be right up your alley.

The biz’s GENE-ADP6, announced this week, can pack as much as a 12-core/16-thread Intel processor with Iris Xe graphics into a 3.5-inch form factor. The diminutive system is aimed at machine-vision applications and can be configured with your choice of Intel silicon including Celeron, or Core i3, i5, or a choice of 10 or 12-core i7 processors.

As with other SBCs we’ve seen from Aaeon and others, the processors aren’t socketed so you won’t be upgrading later. This device is pretty much aimed at embedded and industrial use, mind.

All five SKUs are powered by Intel’s current-gen Alder Lake mobile processor family, including a somewhat unusual 5-core Celeron processor that pairs a single performance core with four efficiency cores. However, only the i5 and i7 SKUs come equipped with Intel’s Iris Xe integrated graphics. The i3 and Celeron are stuck on UHD graphics. 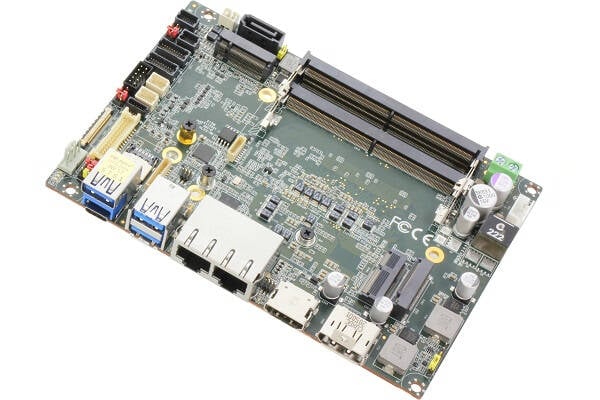 The board can be equipped with up to 64GB of DDR5 memory operating at up to 4800 megatransfers/sec by way of a pair of SODIMM modules.

For I/O the board features a nice set of connectivity including a pair of NICs operating at 2.5 Gbit/sec and 1 Gbit/sec, HDMI 2.1 and Display Port 1.4, three 10Gbit/sec-capable USB 3.2 Gen 2 ports, and a single USB-C port that supports up to 15W of power delivery and display out.

For those looking for additional connectivity for their embedded applications, the system also features a plethora of pin headers for USB 2.0, display out, serial interfaces, and 8-bit GPIO.

Storage is provided by your choice of a SATA 3.0 interface or a m.2 mSATA/NVMe SSD.

Unlike Aaeon’s Epic-TGH7 announced last month, the GENE-ADP6 is too small to accommodate a standard PCIe slot, but does feature a FPC connector, which the company says supports additional NVMe storage or external graphics by way of a 4x PCIe 4.0 interface.

Aaeon has yet to share pricing for the Alder Lake-based SBC, but we can surmise it will come in at a premium to the older 11th-gen GENE-TGU6 it appears to replace. A version of that board sporting an Intel i7-1185G7E retails for $1,217.00 on Aaeon’s online store, and that doesn’t include storage or memory. ®