Calm down - it's potentially only meant for units sold in China

Republican lawmakers have said Apple is "playing with fire" if reports of its plans to source 3D NAND flash from China's YMTC (among others) for the upcoming iPhone 14 prove true.

The lawmakers in question were Marco Rubio, vice-chair of the Senate intelligence committee (R-Florida), and Michael McCaul (R-Texas), who is on the House foreign affairs committee and would potentially lead that committee if his party wins control of the House of Representatives in November's midterm elections. Democrats currently hold a slight majority in the House and Republicans are aiming to reclaim control.

The pair were speaking to business daily the Financial Times.

"Apple is playing with fire," Rubio told the FT. "It knows the security risks posed by YMTC. If it moves forward, it will be subject to scrutiny like it has never seen from the federal government."

McCaul added: "This could very likely devastate the memory chip market and give China even more control of this critical national security technology."

The pair were reacting to unconfirmed reports that YMTC had been added as a supplier from news site Business Korea.

We asked Apple about this. The manufacturer typically divulges nothing at all about manufacturers of individual components at launch. Only subsequent teardowns of the iPhone 14 could confirm YMTC as a NAND supplier, and most folks will be waiting for a specialist to take it apart. Then there's the fact that repeated queries about YMTC from the US government have reportedly not borne fruit.

The company told the FT it was "evaluating sourcing from YMTC for NAND chips" for some iPhones, but clarified that it would be only in devices "sold in China."

Apple currently uses NAND flash from Kioxia in the iPhone 13, pictured below (surrounded by the red rectangle). Repair specialist iFixit last sliced open the phone in September 2021, when it noted Apple had stuck to its unfriendly approach to third-party and DIY repairability, although the vendor has since floated plans to make this a little easier with its Self Service Repair Store. 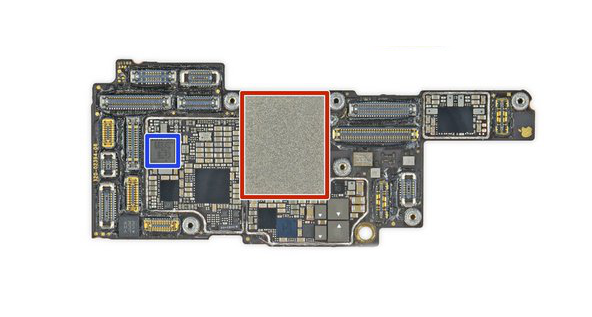 Kioxia NAND in the iPhone 13 (click to enlarge). Pic via: iFixit

It's not the first time YMTC, China's top NAND flash manufacturer, has been whispered about as an additional storage supplier for the iPhone.

Rumors that Cupertino was considering diversifying its memory chip supply chain first surfaced in March this year, with Bloomberg sources already claiming that China was in the mix. The March reports came shortly after contamination disruption at Kioxia, based in Japan, exposed the risks to Apple's global supply.

In February Kioxia and Western Digital said their 3D NAND fab facilities had lost "at least" 6.5 exabytes in flash availability. Adding to the mystery and uncertainty, the contaminated chemical substance and its supplier were never identified, with little insight into whether the debacle could happen again. We'll update this article if Apple responds. ®