The beta version of Red hat's Fedora 37 is available for download – but it's still far from finished.

Back in April we looked at the beta of Fedora 36, but the final shipping version came out rather later than planned. It looks like the Fedora Project is aiming to avoid this happening again, since the beta of next month's version 37 is already available. 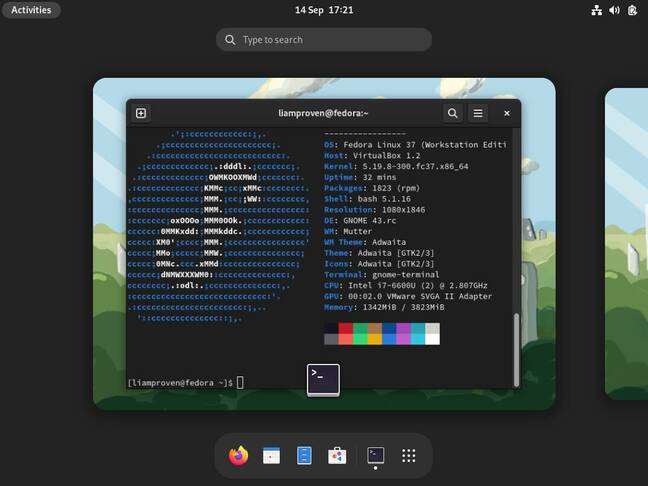 The beta version of Fedora 37 is here, but it's flakier than a Kellogg's factory. Handle with care.

As usual, there will be multiple versions of the distro: there are already betas of all the respins too. As ever, the primary edition remains the GNOME one. This will feature the 25th anniversary version, GNOME 43. However, at this point, the final release version of GNOME 43 isn't expected for another week or so, so the Fedora beta uses a release candidate version.

Notably, Fedora 37 GNOME has a new replacement for a major GNOME app: the new Text Editor in place of the trusty GEdit. However, GNOME Terminal is still here, waiting its turn to be usurped by GNOME Console.

GNOME Settings has a new device security panel, which will include information about firmware updates for supported hardware. For now, the beta uses kernel 5.19, but by the time the final version ships, it will probably use the new kernel 6.0.

If you're not a GNOME fan, then there are plenty of alternatives. Also available are respins featuring KDE Plasma 5.26, MATE 1.26, Xfce 4.16, LXQt 1.10, and Cinnamon 5.4, as well as LXDE, the i3 tiling window manager, and the Sugar educational environment from the OLPC project. As before, there are also Server and Internet-of-Things editions; version 37 has CoreOS and Cloud Base as official editions as well.

Also new for version 37 is official support for the Raspberry Pi 4. Up until now there weren't FOSS drivers for enough of the Pi's hardware, but Fedora 37 will include accelerated 3D drivers for both OpenGL-ES and Vulkan. However, this version drops support for ARMv7, meaning some 32-bit Arm devices are no longer supported. 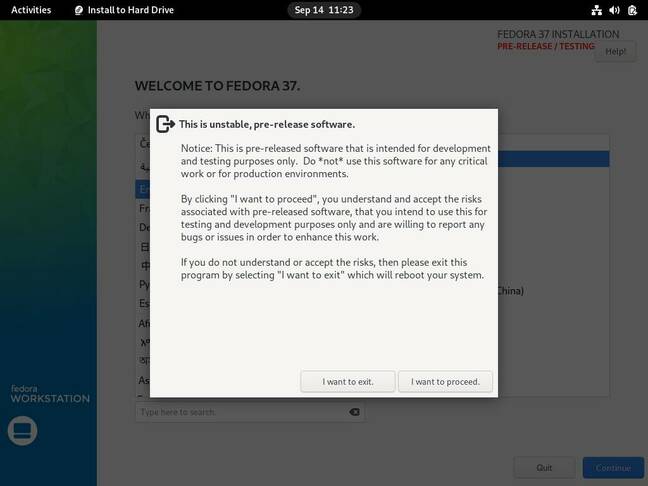 The Fedora 37 beta version has a warning message you must click through to install. We advise you to heed it.

The main Red Hat site has an official announcement and there's a full list of changes too, but some highlights include Emacs 28, Python 3.11, Perl 5.36, and Go 1.19.

The Reg FOSS desk spun up the GNOME version under VirtualBox for a quick look, and it was a bumpy ride. The installer crashed repeatedly, especially at the disk partitioning stage. Once we finally coerced it into installing, we tried to update it using the Software app, but that crashed too.

We tried to send a bug report, but the bug reporting app crashed as well. Even updating from the shell using dnf update failed, so we did it progressively, updating all the packages for each letter of the alphabet in turn. That took quite a while, but did eventually complete work, and the distro behaved itself slightly better after that.

To install, you have to click through a warning that this is an unfinished version, and we suggest you take that very seriously. We're sure the process will be much smoother when the final versions arrive, and we'll take another look at the distro then. ®

Latest version of Red Hat's free distro family arrives, a day after the paid one
OSes12 May 2022 | 32