Or was forced into a rethink by legislation

Video The iPhone 14 harbors a secret that's a pretty big deal: The internals have been redesigned to make it more repairable, says iFixit.

Gone is an excessive use of glue and solder, iFixit CEO Kyle Wiens said in his iPhone 14 teardown report. Instead, Wiens said, the iPhone 14 features a butterfly-style design with a pop-off screen and back plate that can be removed with nothing but a single pair of screws, as you can see below.

Wiens said the iPhone 14's design is a "dramatic rethinking" of Apple's flagship device that signals right-to-repair advocates have won yet another victory against Apple, a long-standing opponent of the self-repair movement. But the legislative tide is turning and Apple sees which way the wind is blowing.

"This design improvement is a big win. These changes to the iPhone will help it last longer and reduce its overall impact on the planet. With any luck, it will inspire other manufacturers to follow suit. All of our—and your—work has paid off. Our advocating, lobbying, yelling in the streets. We've convinced Apple's design team that repairability matters," Wiens said in his teardown post. 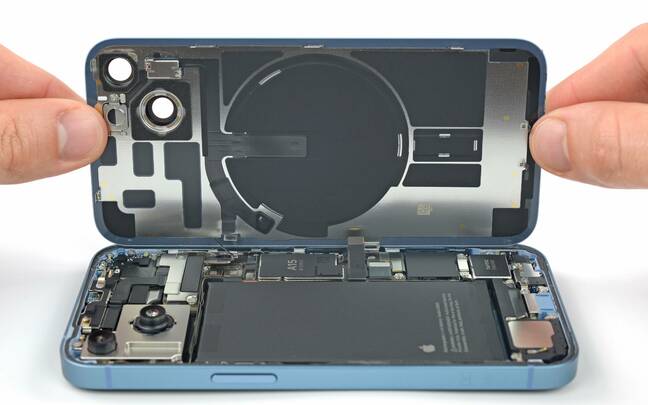 The opened rear panel of the iPhone 14; Kyle Wiens/iFixit

In addition to the butterfly opening and a shift of components to the middle board of the device, the iPhone 14 has easier-to-remove adhesives and got rid of grounding welds in favor of "electromagnetic interference fingers" that spread EM interference across the rear panel. Wiens awarded the iPhone 14 a 7/10 repairability score, the highest iFixit has awarded the handset since the 8 series five years ago.

Still, the device isn't perfect, as Apple appears to be sticking with parts pairing restrictions that require activation of newly-added iPhone components with Apple in order to make them work properly. That makes third party parts out of the question and ensures Apple keeps the money flowing.

Nary a keynote peep

Apple made no mention of the iPhone's internal redesign at its announcement event earlier this month, which Wiens said is surprising given a lack of excitement about the minimally-changed 14 series.

"Why isn't Tim Cook bragging about repairability? We had no idea this was coming, because Apple didn't mention it—at all. But they should have," Wiens said. For reference, Samsung hasn't changed the internal design of their devices since 2015, while the change for Apple is the largest since the X series, Wiens said.

The reason for Apple's silence on a new easily-repaired design may lie in the fact that, while Apple has paid lip service to repairability, it still wants to maintain control itself. It's not going to advertise giving up a major profit center for the biz.

Apple opened a self-service device repair store for iPhone 12, 13 and SE devices in April this year, but right-to-repair critics were quick to point out how Apple was using parts pairing to force Apple users to go through its service for components.

This could mean that, while the iPhone 14 is more repairable, Apple's still hoping you'll drop by the Genius Bar for repairs instead of going it alone, and there's no better way to shrink the repair queue than with a device that's simpler and quicker for everyone - Apple tech's included - to fix.

We've reached out to Apple to learn more about the reason for the redesign, and when iPhone 14 components will make it to the self-repair store, but haven't heard back. ®