NUC NUC. Who's there? It's me again. You folks still want computers, right?

Intel has unveiled the latest addition to its NUC line-up, the NUC 12 Enthusiast, the first to include one of the company's Arc GPUs and targeting content creators and gamers.

Previously codenamed Serpent Canyon, the NUC 12 Enthusiast is based on Intel's 12th Gen Core processors and the Arc A770M with 16GB GDDR6 VRAM, which is a high-end gaming laptop version of the company's GPU family. The combination should provide a decent amount of processing power for graphics-intensive workloads in a small form factor system.

According to Intel, the NUC 12 Enthusiast also features Intel's Deep Link technology in a desktop system for the first time. The function of this is to adjust the balance of the power and thermal envelope of the system between the CPU and GPU in order to deliver optimal performance for the task in hand, as well as enabling some sharing of processing tasks between the two. 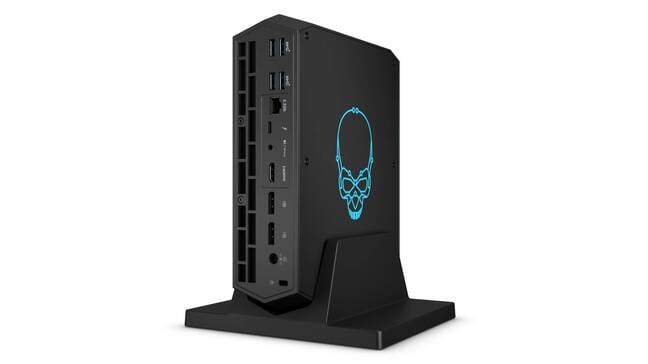 The latest NUC system supports Alder Lake CPUs, specifically the 4.7 GHz Core i7-12700H with 14 cores, combined with up to 64GB DDR4-3200MHz memory. Three M.2 PCIe slots provide the storage options, with two of these supporting PCIe Gen4, for up to 1TB of NVMe storage.

However, as with other NUC systems, Intel offers the NUC 12 Enthusiast as a pre-built mini PC, or as a kit that can be customized. The mini PC version can only fit 16GB of memory.

Intel's VP and general manager of the NUC Group, Brian McCarson, enthused about the new edition, claiming it as an ideal system for anyone trying to create and game.

"The Intel NUC 12 Enthusiast Kit is one of the most exciting NUCs to launch because it's the first to pair an Intel processor with discrete Intel graphics," McCarson said in a statement.

The system provides a combination of high performance in content creation and gaming usages, and a wide array of I/O that would typically be found in larger systems, he added.

According to Intel, the NUC 12 Enthusiast Mini PC and Kit are both expected to be available from late September, with US prices ranging from $1,180 to $1,350, depending on the configuration. Intel also said that fully equipped desktop systems will be available through retailers and system integrators at a later date. ®