If you love having thousands of tabs open, this might be one for you

The Mozilla Foundation has let Firefox 105 out of the gate, and if you use a Chrome-based browser, it's a good time to take another look.

Firefox 105 appeared on Tuesday, and while this isn't a show-stopping release, there is some new stuff that is well worth having. It's not quite five months since Firefox 100 came out, which is long enough for Mozilla's rapid development cycle to have made some substantial changes in the browser.

Some of the new features are relatively small, but will make some users' lives better. If you have to print a page, there's a new option to print just the current page – handy for tickets and other documents with loads of irrelevant small print tacked on the end. Here at the Reg FOSS desk, we're rather traditionalist and favor a plain old three-button mouse, but we hear that trackpad handling on Windows and macOS has been improved and there are some new multi-finger gestures in this version. Apparently this doesn't work on Linux just yet, but we can't say that we've noticed. 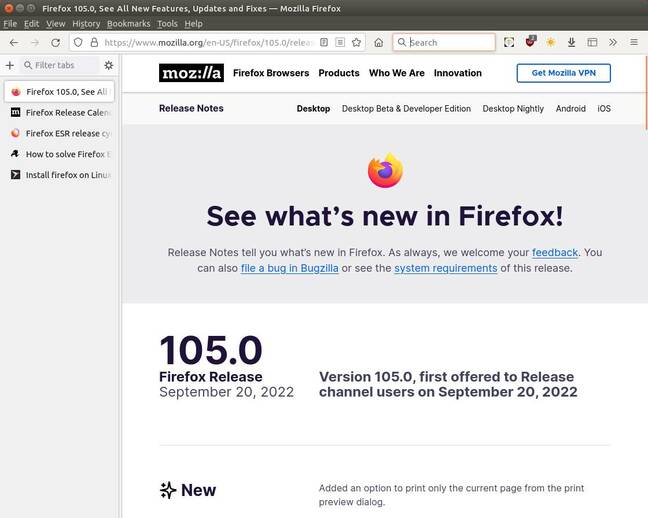 Firefox 105 is leaner and meaner, and remains both more efficient and way more customisable than any Chrome-based browser.

Memory handling has been tightened up, and the browser now handles low-memory situations better on both Windows and Linux. It should remain quicker and more responsive when short on RAM, and avoid crashing if it runs out of space, as there is improved protection for the main process.

Both memory usage and user interface are areas where Firefox retains an edge over Google's Chrome, especially if you routinely use lots of tabs. Chrome spawns a new process for each tab you open, which is good if you have lots of RAM and browsing the web is one of your principal uses for your computer. Since almost all of Google's services are web-based and web-centric, it makes perfect sense for the company.

Firefox also uses multiple processes, via a technology Mozilla calls Electrolysis, but its approach is more cautious. There's one master process, and multiple background ones too, but not generally one per tab. According to Mozilla, its multi-process model only uses 10-20 per cent more RAM than its old single-process model, and around half that of Chrome. Also, if you haven't used a tab in a while, Firefox automatically unloads it from memory.

If you're a heavy user and routinely have many dozens of tabs open, we highly recommend giving the Fox another try – especially alongside a vertical tab bar, such as Vertical Tabs.

We gave the new version a quick spin on Ubuntu, macOS and Windows 11. If you installed your own copy, as we did on Windows and Mac, it should update automatically – pick Help|About to prod it into checking. If it was included with your OS, which will be the case for most Linux users, you may have to wait a little while. Ubuntu users can jump the gun by grabbing the new version from Snapcraft, or open the Software app, go to the Updates tab, and click the Refresh control at top right.

The release of the new version also means that Firefox 102 becomes the new Extended Support Release, or ESR for short. It replaces Firefox 91, which has been the ESR version since late last year, when it was causing some issues for the Debian maintainers. ®

If you are concerned about browsing discreetly, this makes it easier
Applications12 Dec 2022 | 2