Neat idea until you remember that roaches and sunlight, not a good mix

A research breakthrough in Japan could mean future search and rescue missions are conducted using cyborg cockroaches. What's more, an ultra-thin solar film is the real star of this show.

The techno-leap that made "Robobug" possible was developed by the RIKEN Cluster for Pioneering Research (CPR), which said it outfitted a Madagascar hissing cockroach with a tiny Arduino-based backpack, complete with wires running to the bug's rear legs. When stimulated with an electrical current, the researchers were able to get the cyberroach to turn either left or right. Commands are sent wirelessly to the Arduino system in the backpack, which then moves the bug.

In a published paper, the CPR team, led by Kenjiro Fukuda from RIKEN's Thin-Film Device Laboratory, said their experiment largely centered around finding a novel way to power their robot insect.

"The evolution of electronics that can be integrated with organisms has increased the demand for the development of power supply devices with higher power densities," the eggheads wrote.

Unable to power their tiny electronics by battery alone, due to limitations in today's battery technology, the team chose to combine a battery with solar power, using light to keep a small battery within the backpack topped up for as long as possible.

That solar power was generated by an organic solar cell film only 4 microns thick (for reference, a human hair is about 70 microns thick), and which was designed to be attached to a cockroach's abdomen without restricting its movement. 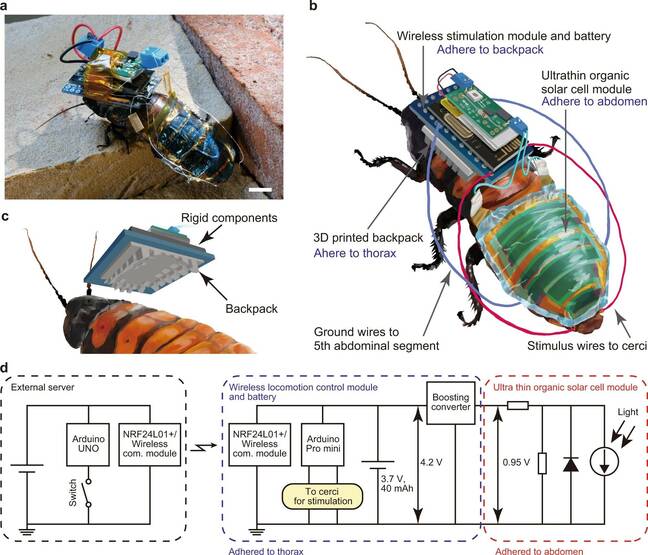 By building this solar cell, and wiring it to the battery, the team was able to get two hours of activity out of the roach's backpack unit. The researchers said most of the power was eaten up by sending and receiving Bluetooth signals to steer the insect.

For those concerned about the welfare of the roaches, the 3D printed backpacks are removable, and the bugs are returned to their terrarium when not taking part in tests.

The bionic bug future is still a ways off, thankfully

The thought of being rescued from a collapsed building with the help of a three-inch long wired-up cyberroach may not be the most pleasant idea, but for now it's just that – an idea. The RIKEN team has a lot of work to do to create remotely-pilotable insects able to investigate disaster areas and hazard zones.

First off, cockroaches are nocturnal and don't exactly like the sun, a problem the team ran into. To charge the cockroach battery backpack, the researchers had to alternate between periods of light and dark, meaning the charging process was quite slow.

To get around that issue, the researchers said additional hardware is needed that includes a locomotion control system, light sensors and temperature sensors, none of which are part of the test build. With those sensors attached, "an algorithm can be established that stimulates the cockroach to stay under the light during the charging mode of the system while considering life support," the researchers wrote in the paper.

Those sorts of algorithms and sophisticated cybernetics, which would effectively overrule the cockroach's instinct to hide from the sun, are beyond the system's current capabilities, the team admitted. For example, according to Reuters, a recent demonstration of the technology had the roach turning left on command, but when told to turn right it simply spun in circles.

RIKEN researcher Yujiro Kakei, who co-authored the paper, said the total cost of the cyborg pack carried by the roaches was just 5,000 yen, or around $35 (£31). Not exactly state-of-the-art hardware. Kakei said the team hopes to add sensors and a camera, along with miniaturizing the tech for future iterations.

According to Fukuda, the tech the team designed isn't limited to cockroaches. "Our strategy can be adapted to other insects like beetles, or perhaps even flying insects like cicadas in the future," Fukuda said. He said the solar film could also be built into clothing or used in skin patches to power vital sign monitors. ®