Flying robots could be the answer to the challenge of building structures in remote locations or hard-to-reach spots, according to engineers who have developed a drone-based approach to 3D printing. 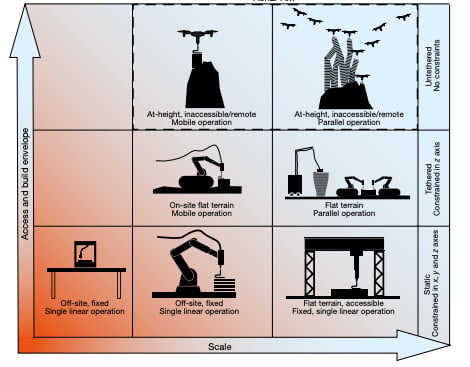 Piping cement or another structural medium via a huge 3D printing rig has already been proven as a potential method to automate the construction of houses and other buildings.

But the hefty machinery has its limits, which engineers propose they can break through using drones to maneuver a 3D printing nozzle.

Bees and wasps, which build structures from mashed-up regurgitated wood fiber, provided the inspiration to researchers at London Imperial College and Empa, the Swiss Federal Laboratories of Materials Science and Technology. They have developed a new manufacturing process using a group of untethered aerial robots to collectively and autonomously construct 3D structures under human supervision.

Known collectively as Aerial Additive Manufacturing (Aerial-AM), drones are divided into machines that scan a structure or lay of the land to help figure out a plan (ScanDrones) and those that perform the 3D printing, dubbed BuilDrones. The latter are fitted with a nozzle that moves to account for volatility in the drone's flight position.

Together, the drone teams work cooperatively from a single blueprint, adapting their techniques as they go, according to a paper published in the journal Nature this week. The drones are fully autonomous while flying but are monitored by a human controller who checks progress and intervenes if necessary, based on the information provided by the drones, the researchers said.

Lead author professor Mirko Kovac, director of Imperial's Department of Aeronautics and Empa's Materials and Technology Center of Robotics, said: "We've proved that drones can work autonomously and in tandem to construct and repair buildings, at least in the lab. Our solution is scalable and could help us to construct and repair buildings in difficult-to-reach areas in the future." 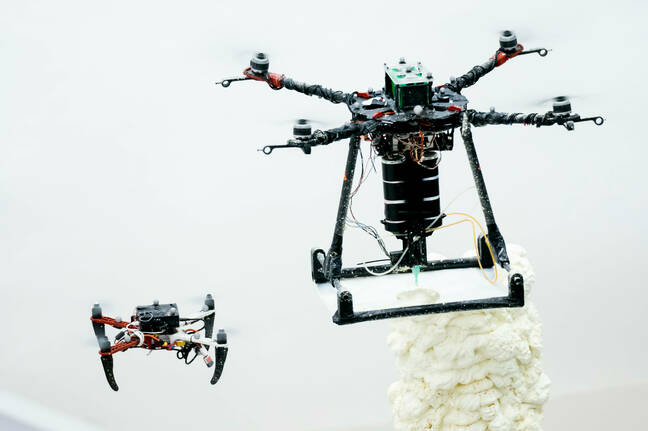 The researchers claim the technology offers future possibilities for building and repairing structures in tall or other hard-to-access locations. Next, the researchers will work with construction companies to validate the solutions and provide repair and manufacturing capabilities.

"We believe our fleet of drones could help reduce the costs and risks of construction in the future, compared to traditional manual methods," Kovac said. ®