Feature On Monday, September 26 at 2314 UTC, scientists at the Johns Hopkins University Applied Physics Laboratory in America, and those monitoring ground-based telescopes across our planet, will be celebrating something usually associated with failure in space missions.

The complete destruction of and loss of signal from a spacecraft.

In this Double Asteroid Redirection Test – or simply DART – scientists want to smash a 610kg (1,345lb) probe into smithereens. Carrying no instruments other than a camera dubbed DRACO, this small-vending-machine-sized craft has been designed to complete one task only: barrel into an asteroid so fast it nudges the space rock off its orbit by just a smidgen.

For this special, first-of-its-kind suicide mission, DART may demonstrate whether we have the technology to avert a deadly collision between Earth and a hazardous near-Earth object, should one bear down on us.

Our Solar System is littered with bits of material that failed to coalesce into planets. Over time, these fragments have settled into orbits around the Sun. That's given rise to the main asteroid belt between Mars and Jupiter, the Kuiper belt beyond Neptune, and the Oort Cloud right at the outer edge of our Solar System.

The vast majority of these bits of debris are benign. Only large rocks, hundreds to thousands of meters across, close to Earth may pose a risk. Asteroids tumble aimlessly and are locked in stable orbits unless they're disturbed by gravitational interactions with other objects or sunlight, which can change their speed and knock them out of place. Then they can suddenly veer off course and be put on a path towards collision.

More than 66 million years ago, an asteroid estimated to be about 10km (6.2 miles) across hit an area near the coast off the Yucatán Peninsula in Mexico and scarred Earth's surface. Scientists believe the impact, which formed the Chicxulub crater, triggered a mass extinction event, killing off dinosaurs and other ancient plants and animal species.

Should the world face similar peril again, it would be awfully nice if that disaster could be prevented. Space agencies around the world have launched near-Earth object monitoring programs, on the look out for another killer asteroid, though tracking hazardous rocks isn't enough. We have to be able to take action and figure out how we can deflect asteroids and save lives. DART is a demonstration of how scientists could one day sufficiently divert a lethal asteroid.

"The Double Asteroid Redirection Test is a test," Tom Statler, NASA's DART Mission Program Scientist, stressed in a briefing on Thursday. "We're doing this test when we don't need to on an asteroid that isn't a danger just in case we ever do need to and we discover an asteroid that is a danger." 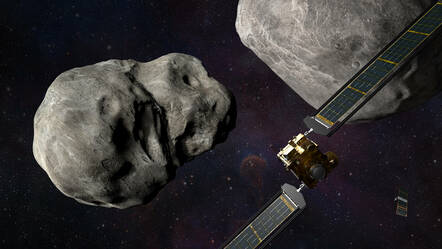 The goal here is simple: can a spacecraft affect an asteroid's speed and course, and how viable would it be to use something like this to actually shift a tumbling rock from our home planet. DART will demonstrate this is possible by crashing into Dimorphos, an asteroid about 170 metres across that orbits around Didymos, a larger 390-metre-wide space rock, roughly 11 million kilometres (6.8 million miles) away from Earth. The spacecraft will slam into Dimorphos at a speed of nearly 6.5km per second (four miles per second).

"The orbit of an object is governed by the speed it is travelling at," Lindley Johnson, NASA's Planetary Defense Officer helping oversee the DART mission, explained to The Register. The DART impact will temporarily slow Dimorphos down, changing its orbital track.

"It will change its speed by just a hair, much less than one per cent."

The impact will trim about ten minutes off its orbital period, cutting it down to 11 hours and 45 minutes, and bringing it slightly closer to Didymos. Johnson said the change may be subtle but it will alter the asteroid's trajectory forever.

The DART hero probe was launched on November 24, 2021 from the Vandenberg Space Force Base in California atop a SpaceX Falcon 9 rocket. The box-shaped spacecraft [PDF], a little over a cubic metre in volume, carrying a wide solar array stretching nearly 30-feet or 8.5-metres on each side, has been orbiting the Sun for ten months waiting for the binary asteroid system to approach. On Monday, its target, the smaller Dimorphos, will come into view.

Scientists and engineers are now performing final trajectory correction maneuvers to make sure DART is on the right path and counting down the hours before it can attack. "At four hours prior to impact, the spacecraft becomes completely autonomous," Elena Adams, Mission Systems Engineer, said at the briefing.

"It starts with detecting Didymos, it starts tracking it. It's starting to guide itself towards Didymos. And then an hour prior to impact for the first time you'll see just one pixel in the field of view of our camera, or DRACO, and that's going to be Dimorphos. And so at that point, this is when we switch from guiding towards Didymos towards guiding to Dimorphos."

DRACO will snap images of the target at a rate of one picture per second, helping craft a video stream for mission control to watch. DART's SmartNav algorithms will be used to achieve a precision lock.

"We're just going to point the camera and take the most amazing pictures of this asteroid that we're going to see for the first time, and we don't know what its shape is, and then impact," Adams enthused. "We will look for the loss of signal and then we celebrate."

As as well as ground-based observatories keeping an eye on the mission, a small dual-camera cubesat companion, named LICIACube, was sent into space along with the DART probe to record the crash and its aftermath. The images beamed back will help scientists figure out how big of a crater DART created on Dimorphos' surface. A more detailed inspection of the Didymos system won't be possible until ESA launches the Hera mission in October 2024. A spacecraft carrying the right instruments to survey DART's impact won't rendezvous with the asteroid until December 2026.

Hera will measure the size and shape of the crater to calculate the momentum transferred to Dimorphos during the impact event. It will also analyse the Didymos system in closer detail to study its composition and other physical traits to confirm whether NASA's modelling of the DART craft's mechanics were correct. The data collected by Hera will help space agencies repeat and study kinetic impactor events so that humanity is as prepared as it can be if and when a giant asteroid looms too close.

Earth not expected to be hit by a big one anytime soon, fingers crossed

Johnson told El Reg a kinetic impactor crashing into a potentially hazardous space rock needs to change its position by about 8,000 miles to move it beyond the radius of Earth. The distance may sound like a lot, but the actual impact itself only needs to change the asteroid's orbit a fraction of that distance since its orbit will increasingly drift over time, moving it outside the danger zone.

"That can easily be accomplished a year or two in advance," he said.

There are a lot of uncertainties in modelling the trajectory of asteroids. Sunlight can change their orbits, as per the Yarkovsky effect. When one side of the rock, facing the Sun, heats up, it absorbs photons. When it cools, these photons leave the asteroid carrying away some momentum. The change of momentum imparts a tiny kick to the asteroid, modifying its spin rate, something known as the YORP effect. Over hundreds of thousands of years, those tiny changes add up and can dramatically alter the asteroid's orbit.

The fate of the Didymos system will depend on the size of the crater left by DART, Jay McMahon, an associate professor of Aerospace Engineering Sciences at the University of Colorado Boulder, explained to The Register.

"Over a much longer timescale, the binary-YORP effect could cause the orbit to get smaller, possibly ending up with the two asteroids crashing," he said.

Future scientists tasked with saving the Earth from an asteroid prang will have to model the Yarkovsky and YORP effect to make sure its target doesn't slowly drift back towards our planet.

Earth encounters meteors every day; most are barely noticeable and burn up in the atmosphere. Asteroids of a few metres across fly into our atmosphere about once a month; ones that are tens of metres across are much rarer. In 1908, one hit Earth in Siberia, known as the Tunguska event, and caused a 12-megaton-equivalent explosion. Nobody knows when a truly horrific extinction-worthy impact will occur.

"It's 100 per cent certain we'll be hit, but we're not 100 per cent certain when," experts from the B612 Foundation, a private nonprofit organisation focused on planetary defense, said in 2018. There are thousands of asteroids placed on the Risk List that have a non-zero impact probability at some point in the future calculated by ESA. Astronomers have discovered nearly 30,000 near-Earth asteroids and find roughly 3,000 new objects every year. Thankfully, none of them seem likely to hit us any time soon. ®