Mozilla may seem like it has forgotten, but this is the most customizable browser going

There are tons of choices in web browsers, and we're not going to try to persuade you that any particular one is the best. However, Chrome's ever-climbing market share suggests that a lot of people don't know how to get the best out of their browser, because there are still quite a few things you can't readily achieve in Chrome that are straightforward in Firefox and its relatives.

Some of the snags of Chrome and its derivatives, such as Microsoft Edge, are of course that you're handing over your data and your credentials to big, profit-making corporations. Browsers based on Google's code also limit what ad blockers can do.

Brave's marketing suggests it is the privacy-conscious choice, but we're skeptical. Brave dabbles in cryptocurrencies, and indeed has its own. The Reg FOSS Desk regards all cryptocurrencies as a Ponzi scheme, and that alone would damn it for us… But there's more. Brave has history for silently rewriting affiliate links, and pocketing the proceeds. And of course its boss, Brandon Eich, left Mozilla due his controversial backing of legislation against gay marriage.

But for us at The Reg FOSS desk, the killer feature that Firefox does better than most Chrome-based browsers is vertical tabs. Even if you're not used to them, if you do a lot of surfing, you owe it to yourself to try to get used to a vertical tab bar. They have a whole list of advantages:

Vivaldi can do some of this, although our testing found its vertical tabs don't interoperate well with its new email client. Microsoft's Edge has a pretty good version. We've also read that Brave is experimenting with its own version of the feature, but we haven't tried it.

There are Chrome add-ons that fake it, but not on all pages, and worse still, they can't hide the built-in horizontal tabs at the top – so instead of saving screen space, you just waste more.

It's worth it. Give it a try for a week and we suspect you'll become a convert and thank us for it. But there are more tools on offer as well. For clarity, this applies equally to the current Firefox forks Waterfox and LibreWolf. With a bit of experimentation, you can achieve similar in Pale Moon, Basilisk or Seamonkey too. 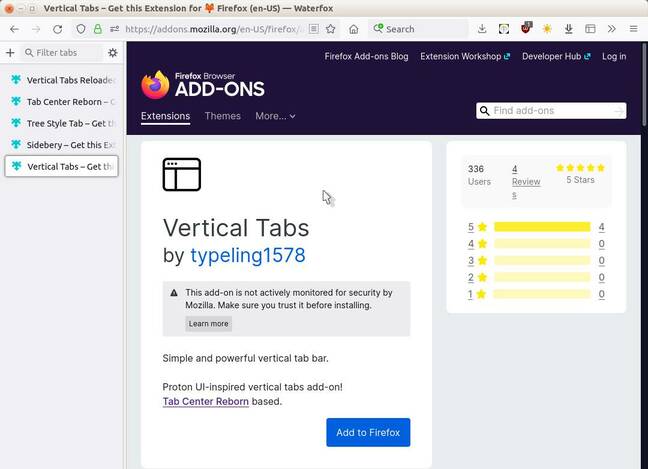 If just one piece of objective evidence might persuade you, it is the sheer number of different extensions available that implement this function. We tried five. Vertical Tabs Reloaded has a simple, flat-look implementation, but with one big snag: you can't pull a tab out of a window and make it a window of its own, nor can you move a tab from one window to another.

Sidebery brings some interesting new functions, such as integrating bookmarks into the sidebar, but we found it a bit unstable. Tab Center Reborn works and its tabs grow to show two lines of description when you have few enough open that it has room. Tree Style Tab is one of the oldest of this type of extension, and it is so customizable it even has extensions of its own. If you like a hierarchical tab bar, it's the one we'd recommend. If you're new to vertical tabs, though, we suggest keeping it simple with Vertical Tabs, which does the basics and no more.

Once you've picked one and installed it, you will notice a new issue: now you've got two tab bars. An unfortunate change in the recent "Quantum" versions of Firefox is that extensions can't readily hide or close the built-in tab bar, which is one of the reasons that we sometimes feel that Mozilla has taken its eyes off the customizability goal of late. Never fear, though, you can still do it. All that's needed is a tiny config file.

Waterfox users are all set from first installation, but if you use upstream Firefox, you'll first need to enable such customizations. Enter about:config in the address bar, and acknowledge the warning that appears. Enter "legacy" in the search box, and you should see a setting called toolkit.legacyUserProfileCustomizations.stylesheets. It's normally set to false; double-click that word to toggle it to true.

Now, you need to find where to put the file. Modern versions of Firefox hide the menu bar, in another of Mozilla's efforts to ape Chrome. We like traditional menus so we turn it back on: Press Alt to open the menus, go to View, then down to Toolbars and tick Menu Bar. Now, go to the Help menu, and pick More Troubleshooting Information. In this screen, there's a line called Profile Directory and this contains an Open Directory button. Click that, and it will open your Firefox profile folder. In there, make a new folder, called chrome (all in lower case). Go into the new folder, and create a new file called userChrome.css. This is where the settings to hide the tab bar go.

Open the new file in a text editor, and copy and paste this into it:

Save the file, and restart the browser.

If anyone from Mozilla is reading this, could you please make this process a little easier? That'd be great. Thanks.

If you use more than one computer regularly, Firefox Sync keeps bookmarks, passwords, and so on synchronized among them, and it also works between Firefox, Waterfox, and LibreWolf (although in the latter, you need to enable it in the Preferences first).

Mozilla's Extensions page has dozens of others. Here's our essential collection. UBlock Origin cuts a lot of distraction from the Web (but we'd be grateful if you'd whitelist The Reg). Multithreaded Download Manager has recently displaced DownThemAll as our preferred download manager. Tab Hunter will quickly find tabs lost among multiple windows. Disable Autoplay stops a lot of annoying self-starting videos. Sometimes, Firefox Sync can result in multiple copies of some bookmarks, in which case Bookmark Dupes will sort that out.

Once you have a dozen or so add-ons, your browser's toolbar can get a bit cluttered, but there's a fix for that too

Once you've installed all of those, your toolbar might be getting a bit cluttered, but that's easy to fix. Right-click anywhere on the toolbar, pick "Customize toolbar" and you can consign less-used add-on icons to the overflow menu. You can also remove any unneeded spacers or controls by just dragging them off the toolbar, optionally hide the title bar, and so on.

There are too many more tweaks and adjustments to list. Among the handy ones, we like "zoom text only" (on the View|Zoom menu), which leaves pictures and layout unscaled while you zoom in and out. There are separate keystrokes for zooming the whole page, or just the text, as well as for controlling media playback and most other functionality. There's a task manager for monitoring memory or CPU-hogging tabs.

Waterfox has the edge in a few cases, such as integrating with Unity's global menu bar, but Firefox runs on more different OSes. For this vulture, 20 years after it appeared, Firefox (or Waterfox) remains our go-to and default browser, on every desktop and laptop OS we use. It runs on Windows, macOS, Linux, all the BSDs, plus mobile OSes. It keeps all our settings synched, blocks many distractions, and uses fewer resources. OK, we admit, we do usually keep Chrome or Edge around, mainly for webmail and some other communications tools, but Firefox remains our weapon of choice. ®