In a letter [PDF] submitted last week in response to an NHTSA docket [PDF] exploring GM's petition for a safety rule exemption, the directors of the San Francisco Municipal Transportation Agency (SFMTA) and the San Francisco County Transportation Authority (SFCTA) urge the federal traffic safety agency to take a closer look at how GM's Cruise autonomous cars have been doing on city streets.

GM's Cruise AVs have been authorized to operate commercially, as a late-night robo-taxi service, in San Francisco by the California Public Utilities Commission since June 1. The rollout hasn't been 100 percent successful, with multiple malfunctions causing traffic jams as cars refused to drive, with the most recent incident causing a kerfuffle on Thursday.

While Jeffrey Tumlin, director of the SFMTA, and Tilly Chang, executive director of the SFCTA, express enthusiasm about "the opportunity for automated driving to significantly improve street safety," they also note that GM's petition fails to document or analyze the safety performance either of Cruise's existing modified Chevy Bolt or its forthcoming Origin AV. And they raise several concerns.

First, the agencies' letter says, there are only about 100 Cruise AVs operating on city streets. If even half of the 5,000 AVs called for in the GM petition were allowed, "this 25x fleet expansion could significantly undermine street performance for all San Francisco travelers."

As a precedent, the letter cites San Francisco County Transportation Authority research that found that 5,700 Uber and Lyft cars in 2016 caused 25 percent of all traffic delays in the city.

Second, the challenge of dealing with a malfunctioning Cruise AV – which currently involves a human driver being dispatched to recover a stalled vehicle – "makes the spate of recently observed travel-lane Cruise AV failures far more consequential" because the Origin lacks manual controls and can't be fetched by a company driver.

"While a Cruise AV can be recovered when a human driver is dispatched to a failure site, to manually retrieve the vehicle, it is our understanding that the Origin can only be removed from San Francisco streets by towing," the letter says.

"Performance with a larger fleet or during daytime hours that is not far superior to recent Cruise AV performance could quickly exhaust emergency response resources and could undermine public confidence in all automated driving technology."

Finally, the agency heads worry that the Origin is heavier and larger than the current Cruise AV and thus "may exacerbate hazards" cited in the letter.

Since late May, according to the transit agencies, police have observed driverless AVs disabled in travel lanes and city managers have noticed 9-1-1 calls from concerned citizens.

"Some callers complained of erratic driving (including signaling in one direction while moving in the other direction) or a Cruise AV blocking a transit vehicle, but the most common complaint to 9-1-1 has been about Cruise AVs blocking travel lanes for extended periods causing traffic backups," the letter says.

Between May 29, 2022 and September 5, 2022, there have been 28 calls to emergency services associated with Cruise AVs, the letter says, though it's unclear whether any of these are duplicates. Also, there have been an additional 20 reports about Cruise AVs spotted on social media. The agencies assume this represents "a fraction of actual travel lane road failures" because few people are on the streets to observe malfunctions during the hours Cruise operates – 10pm to 6am. 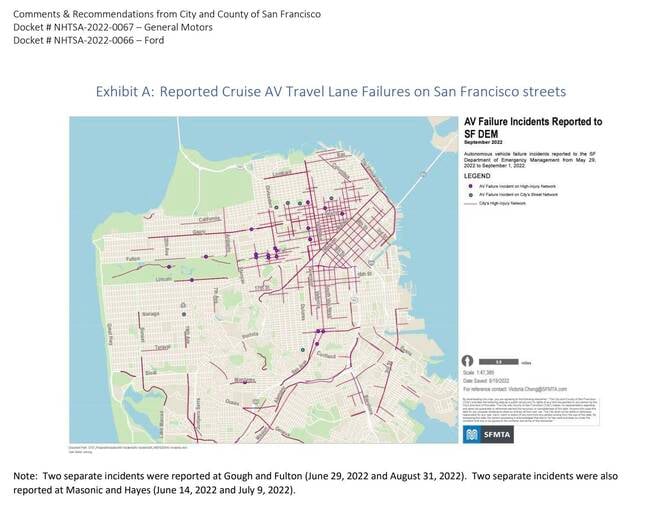 While the exact number of incidents involving Cruise self-driving cars since autonomous operation began in June isn't clear, the robotaxis have been spotted failing and delaying traffic in San Francisco.

Two computer-controlled cars were captured on video blocking traffic near the intersection of Sacramento Street and Leavenworth Street. According to KRON-4, the incident occurred around 10pm on Thursday.

Elsewhere in the city that day, KRON-4 reporter Dan Thorn came across a stalled, unoccupied Cruise car when driving a colleague home.

"It was blocking Sacramento at Mason," he wrote in a post to Twitter. "'Jasper' the car was playing tunes but no one was inside. @SFMTA_Muni bus had to reroute."

He said it took Cruise 20 minutes to respond to the first-responder phone number visible on the car's display screen.

KRON-4, a MyNetworkTV affiliate, also reports that on Thursday a Cruise vehicle encroached upon the lane of San Francisco Muni bus, resulting in both vehicles stopping. The incident is said to have occurred around 10.19pm on Geary Street near the intersection of Franklin Street.

The San Francisco Police Department told The Register it could not locate any reports about these incidents from last week.

Not an isolated case

But there have been others. On Tuesday, June 28, 2022, as many as 20 driverless Cruise cars had stopped, blocking traffic for about two hours at the corner of Gough and Fulton streets, according to the San Francisco Examiner. Elsewhere in the city that evening, near Fell and Masonic, Cruise cars were also said to be idling on the street.

“Safety is the guiding principle of everything we do," said Cruise spokesperson Drew Pusateri in an email to The Register.

"That means if our cars encounter a situation where they aren’t able to safely proceed they turn on their hazard lights and we either get them operating again or pick them up as quickly as possible. This could be because of a mechanical issue like a flat tire, a road condition, or a technical problem. We’re working to minimize how often this happens, and apologize to anyone impacted."

The company has also been working to improve its software. On June 3, 2022, just days after Cruise got the green light to operate autonomously, one of the company's vehicles operating in autonomous mode was struck by a Toyota Prius.

According to a report [PDF] GM filed on August 26, 2022, with the US National Highway Traffic Safety Administration, the Cruise robocar was making an unprotected left turn (across traffic) and was hit by the on-coming Prius. The Prius driver was deemed to be the "party at most fault" in the police report, though Cruise nonetheless revised its software to make a different path prediction for the given circumstances.

"As the Cruise AV turned left and began traversing the intersection, the Cruise AV predicted that the oncoming vehicle, which was traveling approximately 40 mph in the 25 mph right-turn lane, would turn right and directly into the path of the Cruise AV," the report says.

The new software, released on July 6, 2022, "improves the ADS’s [automated driving system] predictive performance in various ways, including conditions similar to the singular, exceptional event that is the subject of this filing."

According to Cruise, the update means its robocar would have selected a different path that avoided the collision.

The California Public Utilities Commission told The Register, "The CPUC is aware of the incidents with autonomous vehicles (AVs) in San Francisco, and we are working with the AV companies to understand their frequency, location, and the conditions under which they occur. In general, if an AV company violates their permit conditions, the CPUC has the authority to suspend or revoke their operating authority."

What the SFMTA and SFCTA would like to see is better data and the implementation of numerous safety measures.

"San Francisco believes these incidents reflect the simple reality that the Cruise AV automated driving system is still under development," the letter from the agencies says.

"We do not expect perfection. However, these incidents demonstrate that travel lane failures that block roadways should be considered a key performance indicator for driverless readiness and that NHTSA should collect data on the number and rate of these incidents in relation to both vehicle miles traveled and the severity of the road impact (lanes affected and duration of impact)." ®