Thinking about shelling out $800? If you break it you're 'screwed'

The Apple Watch Ultra was announced this month with a ruggedized design, new button(!), and a focus on outdoorsy types, but now that the repairability fans at iFixit have their hands on it, they're only concerned about one thing – screws.

Apple has always been very keen on its hermetically sealed aesthetics, but this has historically made repairing the company's products incredibly difficult – if you don't break the kit in the process.

However, the single second of screen time afforded to the fasteners in the presentation stuck out like a sore thumb for iFixit, which lives on in hope that Apple one day makes repairs more accessible for the average consumer.

OK, old habits die hard. The screwdriver needed to open the Apple Watch Ultra is not one you'd typically find in a kitchen drawer. Apple is partial to the five-pointed, tamper-resistant pentalobe, so your collection of Phillips heads isn't going to cut it here, but it's not like these can't be easily bought on the internet, not least from iFixit itself. 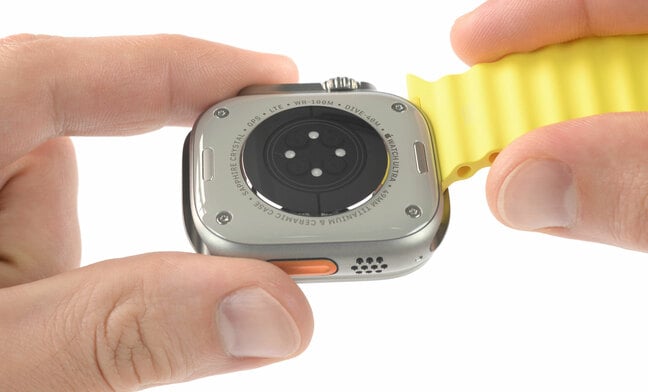 The company could hardly contain its excitement. Introducing its teardown of the flash watch, it said: "Screws are a fixer's best friend – they're easy to remove, easy to replace, and less likely to break, which is why they should always be the first choice for repair – not glue."

That optimism was almost immediately shredded, a bit like what happened to the gasket, crucial to the watch's 100m depth rating, when the team dove in with their screwdrivers. "We're thankful the adhesive isn't more aggressive, but replacing this meticulous gasket to seal your Watch back up will be no fun at all," they noted.

From suboptimal to worse: on applying heat and prying the case away, one of the band release springs went AWOL, so preparing the watch for component replacements is set to be fiddly – and the team hadn't even gained full access yet.

Once the backplate was off, however, there was more disappointment. Therein lay not a battery, but the rear of the watch's System in a Package (SIP), meaning that the team would have to go through the 1.92-inch display.

iFixit said of the process: "If you thought the standard Apple Watch opening procedure was tough, the Ultra is, well, ultra tough. The seams are tight, the prying angle steep, the risk of separating the display from the glass: high. And yes you need to open from this side to get to the still-consumable battery. We're all for a more accessible rear sensor, but if we had to pick easy access to one component it would absolutely be the battery."

Amusingly, in iFixit's video of the process (above), the display broke immediately.

Watch rendered useless, there were some upsides to the battery and Taptic Engine, which were both well protected by metal casing and held down with screws (hooray?).

"No adhesive, just four Y000 screws. Too bad you have to risk breaking the screen to get to this point," iFixit noted ruefully.

The upshot is that, while easily accessed sensors and SIP are all well and good, the screws are in the wrong place. If Apple has its heart set on placing the battery beneath the display and above the SIP, it is the screen that should be the easy part to remove, not the backplate.

"The Apple Watch is an accessory, not a daily staple," iFixit said. "Accordingly, Apple is betting you're willing to part with it for a couple days, or accept a loaner watch while your personal watch is shipped to a repair hub. That means there's less incentive to make repairs quicker, and they get to control the repair tools." 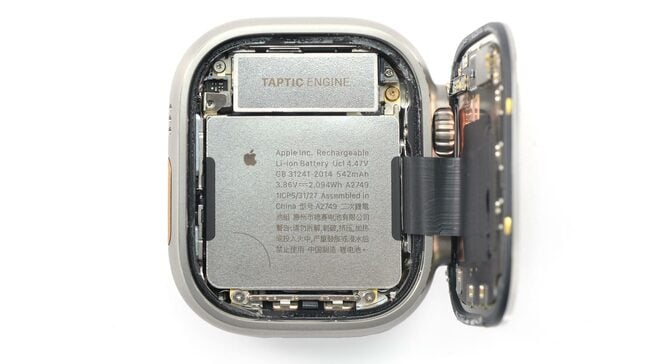 Delving deeper, iFixit credited Apple for the watch's streamlined display removal (only compared to earlier models) and the consolidation of antennas into the screen and body. "That makes for fewer cables and more direct paths to the critical components – battery and screen – with less chance of collateral damage along the way."

As for that Taptic Engine, the notification buzzer accounted for 16 percent of the Ultra's weight at 9.8g, which iFixit assumed was the reason the vaunted "Siren" feature was disappointingly quiet (86db). Combined with the battery, these components take up "virtually the entire internal volume."

Although praise was heaped on the case for its intricate antenna pass-throughs and manufacturing process, ultimately the barriers to a truly replaceable battery forced iFixit to damn the Ultra as "almost repairable."