UbuntuDDE 22.04 is colorful, and with slightly less Chinese flavor than Ubuntu Kylin

The team behind the unofficial Ubuntu remix with the Deepin desktop has rolled out an updated version based on the current Ubuntu long-term support release.

The Reg FOSS desk took a look at UbuntuDDE at the start of the year and came away impressed. The Linux Deepin desktop environment is bright, colorful, and easy to use, but some Western users might be reluctant to use an OS from the People's Republic of China. When we looked at the resource usage of the other unofficial flavors last month, we mentioned that, sadly, UbuntuDDE 22.04 hadn't surfaced. Well, now, here it is.

UbuntuDDE 22.04 is a promising combination. The base OS is the current "Jammy Jellyfish" LTS version of Ubuntu, with the same Calamares installer used by Lubuntu. On top is the decorative Deepin desktop, a familiar Windows-like layout of taskbar, start menu, and so on.

There are some nice touches: for instance, although the taskbar can be docked to any edge of the screen, just like on Windows, by default it floats a short distance in from the screen edge, with larger icons, making it look a little more like macOS. Amusingly, this is called "fashion mode" as opposed to the more businesslike "efficient mode". 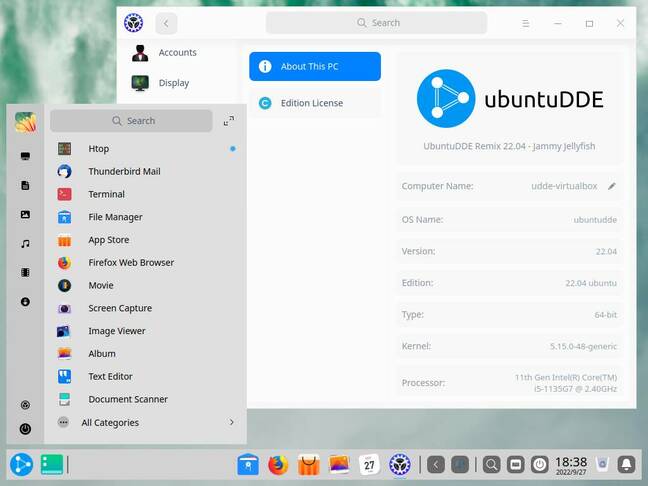 UbuntuDDE has a colorful Windows-like desktop, with light and dark modes, integrated search, an on-screen keyboard, and more

The Start menu defaults to one long alphabetical list. A button in the corner switches it to a full-screen app launcher, if that's what you prefer. That can be a bit overwhelming so both sizes also have a categorized view, which splits apps up into Internet, Video, Graphics, Office, and System. Newly installed apps are highlighted with a glowing blue dot, and the Start menu also has quick-access buttons for the various built-in subfolders of your home directory.

To be honest, the experience is quite similar to that of the various editions of Ubuntu with the UKUI desktop. We looked at the Ubuntu Kylin family recently, and noted that while the UKUI desktop is a pleasure to use, many of the distros' other functions are annoyingly Sino-centric. Desktop search only offers Baidu or other Chinese search engines, a weather applet that only offers cities in China, and app stores full of Chinese-language apps. Some similar comments apply to the latest release and beta versions of Linux Deepin.

UbuntuDDE avoids that, and about the only remaining trace is the bundled Onboard on-screen keyboard and a language picker, which we suspect are remnants of Deepin's input methods for entering Chinese text. You can exit them or hide them from the Settings apps, though.

To be honest, the Deepin (DDE) and Kylin (UKUI) desktops are strikingly similar. Neither project's website has any mention of the other, but they share much the same look and feel: something like Windows 7 updated with some stylistic tweaks from Windows 11, such as "multitasking view" and icons centered on the taskbar. We suspect an undisclosed relationship between them.

Neither desktop feels as mature as that of Windows itself, and the Start menu, while flexible, isn't as customizable (although saying that, Windows 11 itself feels very limited in this department compared to 10, just as Windows 10 was a pale shadow of Windows 7's tasteful bling). However, UbuntuDDE is quite lightweight.

We tried UbuntuDDE in VirtualBox and on bare metal, and it worked fine in both. To give numbers comparable to our recent roundup of the official Ubuntu remixes, as well as the unofficial ones (see bootnote), we used identical settings: 4000MB of RAM, two CPU cores, and 3D acceleration enabled. Last time we mentioned that Ubuntu Cinnamon was the only remix to demand more than 16GB of disk. Well, UbuntuDDE requires even more, and won't even try to install with less than 20GB.

Saying that, though, the result was relatively lightweight. It took up just 8.5GB of disk, less than anything except Lubuntu (we have a breakdown of remixes' resource usage here if you fancy), and at idle, RAM usage was just 584MB, which equals KDE Plasma, the lightest of the mainstream Ubuntu desktops. The only Ubuntu 22.04 flavors to use less memory are Lubuntu and Xubuntu.

We noticed two other interesting touches. Although Snap support is present, there are no Snap packages at all installed by default. The Firefox browser is a native Debian-packaged version. Secondly, UbuntuDDE enables zram memory compression by default, even if you tell it to use a swapfile.

As with other Chinese-influenced distros, UbuntuDDE is very colorful, with sound effects at login and logout, animated mouse pointers, and an assortment of attractive wallpapers. It doesn't have Kylin or Deepin's fancy bootup and shutdown screens, but it beats out Ubuntu Budgie for the shiniest desktop.

There's no Wayland option on the login screen, but strangely, the login screen does offer a choice of desktops: the default X11, complete with funky X.org logo, and – oddly – one called "plasma". If you pick this, you get the KDE loading screen, then a blank black desktop. About the only thing that works is Alt-F2 to run an app, which opens the KDE form, and shutting down, which opens the KDE shutdown screen. Based on this, we suspect that UbuntuDDE is based on Kubuntu, rather than mainline Ubuntu.

There were a few other rough edges, but they're fairly small. As befits a remix released after 22.04.1, there were very few outstanding updates – but once we installed them, the app store asked for a password and then failed to open. It would still open from a root terminal, though. Every time we rebooted, there was a message about forcing the unattended upgrades service to stop. Overall, though, the distro works fine and it's perfectly usable. 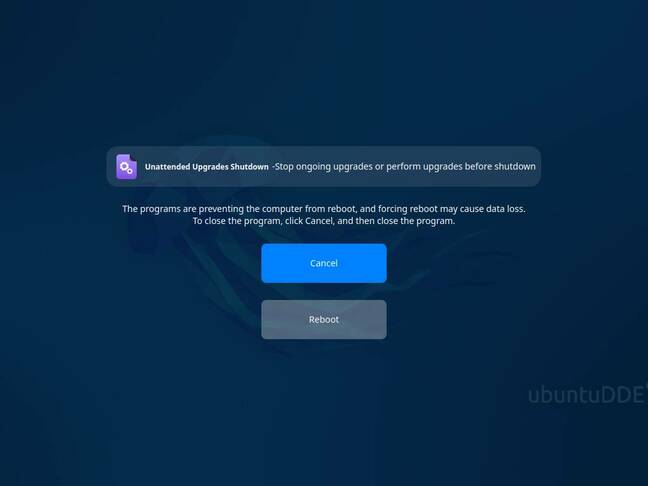 There are a few glitches here and there, such as this error on shutdown, but none are deal-breakers

There are lots of Linux desktops to choose from and, as we've said before, too many of them look like Windows. Saying that, UKUI and DDE are two of the very best Windows-style desktops out there. For us, we prefer either KDE, Cinnamon, MATE, or LXQt. Only Xfce has the edge, but it's much plainer.

UbuntuDDE is a clean, attractive, modern desktop distro, and a relatively lightweight one, too. (In places, maybe a bit too modern: we don't like the combined titlebar/toolbar window headers, or the ubiquitous hamburger menus, but those are spreading everywhere in recent years.) Yes, it has a few glitches. However, we suspect that its developer, Arun Kumar Pariyar or "openarun", may be a one-man team. If so, he's done a good job. If you're nostalgic for the brighter, more colorful era of Windows 7, UbuntuDDE is worth a look. ®

When we last looked at Ubuntu Cinnamon and Ubuntu Unity, both were unofficial remixes. Since then, though, the Ubuntu Unity team applied to become an official edition, and this was voted through – so from Ubuntu 22.10, the Unity remix will be official once again.