And it's not the only venerable window manager still in development

A new version of a quarter-century-old window manager shows that there's still room for improvement and innovation, even in established, mature tools.

The world of Linux desktop environments is full of sound and fury, with a constant stream of new developments and new versions. Lots of them duplicate each others' work and functionality, sometimes just using slightly different tooling. All too often, ambitious or promising projects never reach version 1.0. Either they get abandoned or simply become moribund, and new updates stop appearing.

It's easy to be distracted by this constant background noise and forget that there are simpler alternatives to a complete desktop, without going full Luddite and living at a console prompt. A trendy way to do this is with a tiling window manager, and alongside established favorites – for example awesomewm, i3, and ratpoison – there are lesser-known ones that are exploring new functionality such as bspwm, herbsluftwm, and Qtile. Lots of new tiling window managers are arriving on Wayland like cagebreak, dwl, newm, and river. 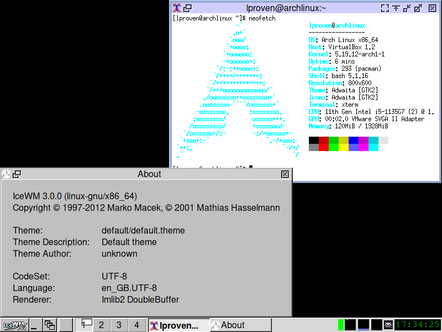 IceWM is an prime example of that simpler middle ground, a traditional stacking window manager allowing you to open, move, and resize windows. It's relatively simple, easy, and quick to learn. By default, it also provides an app launcher and an app switcher, using the familiar Windows 95 model: a hierarchical start menu and a taskbar.

If you do a minimal install of openSUSE, you get IceWM. It's also one of the defaults in the lightweight antiX and Absolute Linux distros.

With such a relatively simple remit, it's good to see that development is still going on. Version 2.0 appeared late in 2020, removing a legacy protocol and adding a new image rendering engine.

Now version 3.0 is out with a whole new feature: tabbed windows. Reminiscent of one of The Reg FOSS desk's favourite OSes, the late and great Be OS, tabbed windows turn the title bar into a tab that is less than the full width of the window. In IceWM 3, this allows you to attach windows together to form one entity that can be moved and sized in a single operation – but the contents of the different windows can be accessed individually using each one's tab. In other words, it works like browser tabs, but the different windows don't need to be from the same parent application.

IceWM isn't the only window manager still in development. FVWM is even older, dating back to 1993, but version 3 is in active development. Joe's Window Manager, jwm, reached 1.0 in 2005 and so is a comparative youngster, but also got a new release this year.

IceWM's new tabbed windows are the sort of relatively simple improvement to the very well-established metaphor of window management that this vulture really likes to see: small, elegant, and yet helpful. We feel that there's plenty more room for improvement within this space. For instance, very few window managers offer the choice of where the title bar (or tab) is located; on a widescreen, placing them on the side, as wm2 and wmx do, would save valuable vertical pixels. ®