Micron has committed to a $100 billion memory chip fabrication plant in New York State, just days after saying it was cutting back on investment because of weakening demand in the semiconductor market.

The new facility will be the largest semiconductor fabrication plant in the history of the United States, Micron claims, with construction and investment stretching out over a long period of time: building it will take the next 20-plus years, and the first phase investment of $20 billion is scheduled for the end of this decade.

Micron said the new facility will be located near the town of Clay in Onondaga County, New York, and will complement the memory maker's previously announced high-volume manufacturing fab in Boise, Idaho. The site will eventually include four cleanrooms covering a total of 2.4 million square feet, approximately the size of 40 US football fields, the company claims. 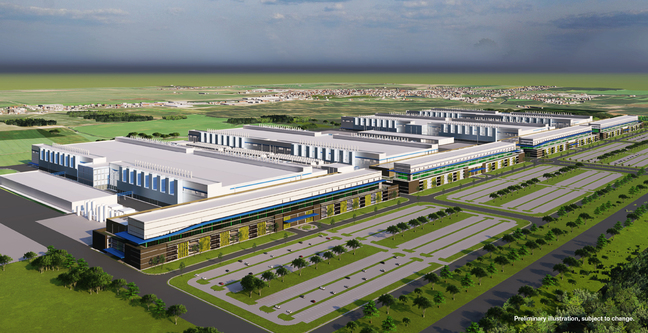 Like the Boise facility, some of the investment for the New York megafab is set to come from funding made available through the federal government's CHIPS and Science Act, but it appears that Micron will additionally receive $5.5 billion in incentives from the state of New York over the life of the project, while the town of Clay and Onondaga County are also offering what is termed "key infrastructure support" for the new factory.

"I am grateful to President Biden and his Administration for making the CHIPS and Science Act a priority, to Senator Schumer and a bipartisan coalition in Congress for passing the legislation, and to Governor Hochul and County Executive McMahon for the local and state partnerships that made this investment possible," Micron president and CEO Sanjay Mehrotra said in a statement.

In exchange, the new fab will deliver benefits beyond the semiconductor industry by strengthening US leadership, Mehrotra claimed, as well as providing economic and national security and driving American innovation and competitiveness.

Micron claimed that building the megafab is part of a strategy to gradually increase DRAM production on American soil to 40 percent of the company's global output over the next decade. The timeline is for site preparation work to start in 2023 and construction to begin in 2024. Production output is scheduled to start in the latter half of the decade, gradually increasing in line with industry demand trends.

The company also said it is teaming up with the state of New York on a $500 million investment aimed at expanding and preparing the workforce in the region, focusing on disadvantaged populations. Micron will stump up $250 million over the next 20-plus years, while $100 million is set to come from New York and $150 million from local and national partners.

Last week, Micron said it was cutting back its capex investment in production capacity in 2023 by more than 30 percent in response to disappointing Q4 2022 earnings results, blamed on weakening demand in the semiconductor market.

However, Micron may take heart at new forecasts from investment bank Morgan Stanley that project a return to growth for the semiconductor industry by the second half of 2023, according to Bloomberg. The company singled out Taiwanese chipmaker TSMC and Korea's SK hynix as names to watch.

Other industry watchers such as Gartner are still forecasting that the semiconductor market will start to turn around in 2024, with a return to growth coming in 2025. ®