The caterpillar larvae of the wax moth produce saliva with enzymes capable of oxidizing and degrading polyethylene, offering a potential solution to the plastic pollution challenge.

Built from synthetic molecules derived from fossil fuels, plastics have changed the industrial world since the Second World War. However, many plastics do not naturally biodegrade, leading to the buildup of waste products on land and in the ocean.

Polyethylene, or polythene, makes up about 30 percent of synthetic plastic production. Although some studies show it can be degraded by biological means, this generally requires a harsh abiotic pre-treatment such as heat or radiation. The degradation can be achieved by some microorganisms but that can take months. At the same time, scientists have so far failed to identify the enzymes responsible.

A group of scientists led by Federica Bertocchini, a postdoctoral researcher with Consejo Superior de Investigaciones Cientificas (CSIC), Spain's research council, have now identified the enzymes which can break down polyethylene in a few hours at room temperature. 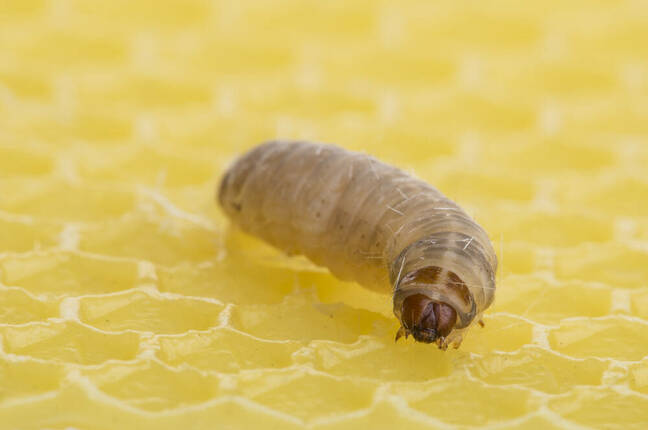 The waxworm, a larva of the wax moth, on a beeswax grid (its main food source)

Waxworms are the caterpillar larvae of wax moths, also known as bee moths. They are nest parasites in bee colonies and eat cocoons, pollen, and shed skins of bees, and chew through beeswax. But what is bad for bees might be good for humans.

Bertocchini and her colleagues studied the saliva of the wax worm (Galleria mellonella), showing that it can degrade polyethylene, and say they have identified two enzymes that can reproduce this effect.

In a paper published in Nature Communications, the authors suggest these enzymes – which they named Demetra and Ceres after the Greek and Roman goddesses of agriculture – could offer new approaches to plastic waste degradation as well as the upcycling of plastic components.

"The wax worm saliva can overcome the bottleneck step in PE biodegradation, namely the initial oxidation step. Within the saliva, we identify two enzymes, belonging to the phenol oxidase family, that can reproduce the same effect. To the best of our knowledge, these enzymes are the first animal enzymes with this capability, opening the way to potential solutions for plastic waste management through bio-recycling/upcycling," the paper said.

"This study suggests that insect saliva might result as a depository of degrading enzymes which could revolutionize the bioremediation field," the authors said. "Although further studies will be necessary to obtain a deeper understanding of the step-by-step evolution of plastic in contact with wax worm saliva enzymes, this discovery introduces another potential approach for dealing with plastic degradation. In a circular economy frame, this study opens up a potential field both in plastic upcycling, and in manufacturing the plastic of the future, with ad-hoc formulations prone to facilitate degradation by selected enzymes." ®