Intel claims to have achieved a milestone in efforts to produce silicon spin qubit devices using existing manufacturing processes, a move they think might pave the way for large-scale production of quantum computers.

Intel's quantum angle has been on scaling up the process to fabricate quantum processor chips using its own transistor manufacturing techniques, which have been tuned for large-scale production over many decades.

Intel claims it has managed to deliver the "industry's largest silicon electron spin device," with a single electron in each location across an entire 300 millimeter silicon wafer. The chips making up the wafer displayed a high level of uniformity, the company said, claiming a 95 percent yield rate across the wafer. 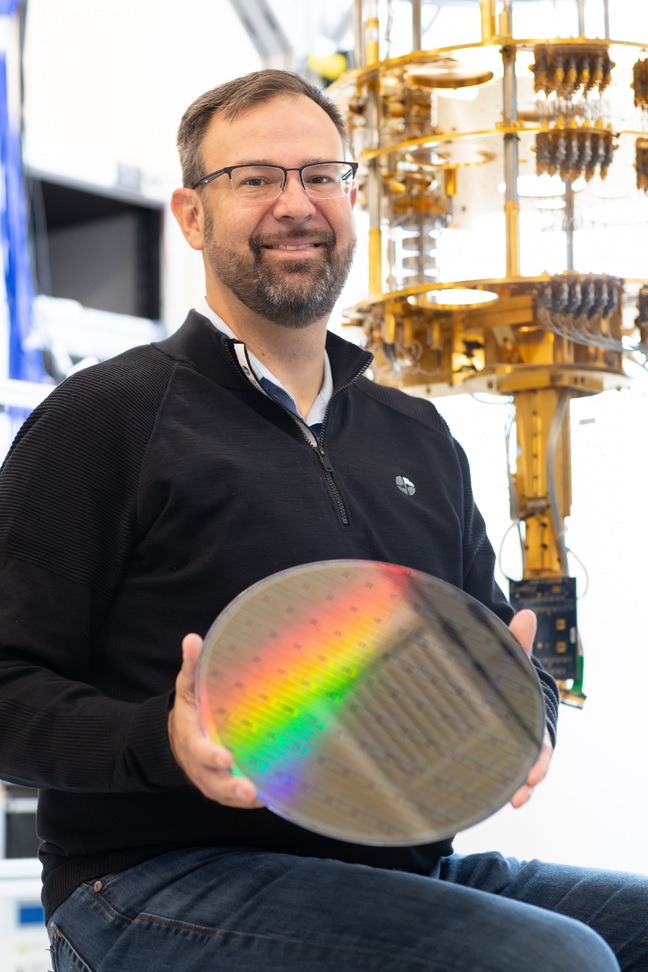 Intel's James Clarke with the wafer

This meshes with what Intel said would be possible earlier in the year, when the company first announced it had been able to produce silicon qubits for quantum logic gates using the same manufacturing processes that are employed to mass produce its processor chips.

The latest silicon spin prototype device was tested using a specially designed quantum cryoprober. This is a cryogenic chamber that is unusual in that it's large enough to fit in Intel's latest-generation of dinner plate-sized silicon wafers as well as the equipment used to probe them, all while operating at 1.7 Kelvin, just a tad above absolute zero, which is required for the to spin qubits to maintain their stability.

According to Intel, the cross-wafer yield it achieved allows automation of data collection across the wafer at the single electron regime, leading to the largest demonstration of single and double quantum dots to date – more than 900 single quantum dots and more than 400 double dots, the company claimed.

The increased yield and uniformity achieved in comparison with earlier spin qubit devices will allow the chipmaker to use statistical process control techniques to identify areas of the fabrication process it can optimize.

This represents a step towards being able to scale up to the thousands or millions of qubits that will be required for a commercial quantum computer, according to James Clarke, Intel's director of Quantum Hardware.

"The high yield and uniformity achieved show that fabricating quantum chips on Intel's established transistor process nodes is a sound strategy and is a strong indicator for success as the technologies mature for commercialization," Clarke said. "In the future, we will continue to improve the quality of these devices and develop larger scale systems, with these steps serving as building blocks to help us advance quickly."

Intel previously detailed that its vision is to create quantum computing devices that squeeze millions of individual qubits onto a single chip. This is in order to overcome the reliability issues with quantum systems by using error correction techniques that rely on using many physical qubits to represent a single logical qubit.

Hundreds or thousands of logical qubits would be required to build a system capable of the complex wizardry promised for fully fault-tolerant quantum computers, which is why companies like Intel are striving for the millions of qubits required.

Intel presented the full results of this research this week at the 2022 Silicon Quantum Electronics Workshop in Québec, Canada. ®