This and wearables fortified with machine learning to serve you, human

On Thursday Google held an event in Brooklyn, New York to introduce revised Pixel phones, along with the Pixel Watch mentioned at the search giant's developer conference in May. There was also a glimpse of a Pixel tablet due next year.

The Pixel 7 Pro ($899) and the Pixel 7 ($599) both use Google's new eight-core Tensor G2 processor and run Android 13. In theory these phones can be operated at one's default level of worry for half a decade before the elevated stress of hardware support expiration sets in – Google has committed to five years of security updates instead of the usual three. Google's Stadia just managed three years before being killed off, so that's 1.7 Stadias of security fixes.

"With Tensor G2, our phones and tablets can do so much more, and we've added a next-generation on-device TPU, which keeps up with our rapidly evolving machine learning research," said Rick Osterloh, senior veep of devices and services at Google, at the event.

Versus the previous Google Tensor chip, the G2 has the same CPU cores, except it has two A78s rather than two A76s, a stepped up GPU, and a better TPU. More of the same, basically. 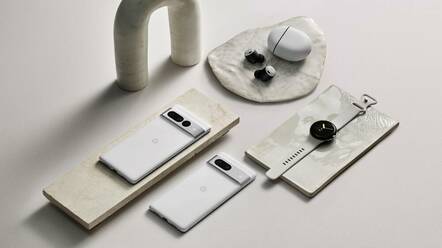 The Pixel 7 (Amateur?) has a dual rear camera system, wide and ultrawide, and the same front-facing camera as the 7 Pro. Both sport Titan M2 security hardware, fingerprint and face unlock capabilities, and (soon) free access to a built-in VPN that would normally be part of a Google One subscription.

The fine print says, among other things, "restrictions apply. Some data is not transmitted through VPN. Not available in all countries." You've been warned.

Google's Pixel cameras have various tricks up their sleeves, such as a capability called Guided Frame that allows people with impaired vision to frame themselves properly for selfies by using audio tones to guide photo composition.

Both phones come with Wi-Fi 6E+ support, which just so happens to be something Google is now supporting in its recently announced Nest Wi-fi Pro.

Google says its voice-jail automation system, Direct My Call, has been improved with the new smarts in its phones. For many businesses, the service will now predict the voice jail options that will be presented when interacting with the company's automated system, allowing users to navigate through the tree structure of options more efficiently. You perhaps didn't ask for this future full of automation and counter-automation but here it is. Enjoy.

The Chocolate Factory also introduced the Google Pixel Watch, which integrates technology from the company's $2.1 billion Fitbit acquisition last year, a deal that somehow survived antitrust scrutiny from European and US regulators.

Park suggested the Pixel Watch empowers wearers to do things like thermostat adjustments via the Google Home app, listening to YouTube Music while out and about, seeing notifications from Gmail and Calendar, and checking out at stores and paying for transit fees via Google Wallet.

And of course there's the Fitbit functionality to measure one's heart beat and other bio-oriented data, with the help of machine learning, which is surely kept very private. Fall detection, coupled with calls to emergency services, is coming in 2023, so try not to tip over until then.

"The Pixel family is finally all coming together," Osterloh concluded, "A growing portfolio all harnessing Google's state-of-the-art AI to understand your needs and make life easier."

Except for the tablet. That's next year, once it gets approved by the FCC. ®