NASA's Juno probe had a close encounter with the Jovian moon Europa on September 29 and this week the space agency released the highest resolution photograph ever taken of its icy crust.

Europa has captured the imagination of scientists as there is theoretical consensus that the moon's frozen shell harbors a vast salty ocean beneath – one that potentially has twice as much water than Earth's oceans combined. This is despite the fact that Jupiter's moon is only 25 percent of the diameter of Earth.

The hope is that where there is water, you could host life – but Europa would need some other essential building blocks like carbon, hydrogen, oxygen, and sulfur to name a few.

It would also need energy to sustain life. Though Europa, Jupiter's sixth satellite, is far from the Sun (about 485 million miles or 780 million kilometers), scientists believe that Jupiter's strong gravity causes tides on Europa that stretch and tug at the moon, producing heat.

So although it appears a desolate snowball on the surface, it may be one of the best candidates in the Solar System for hosting alien life, hence the close-up during Juno's flyby. 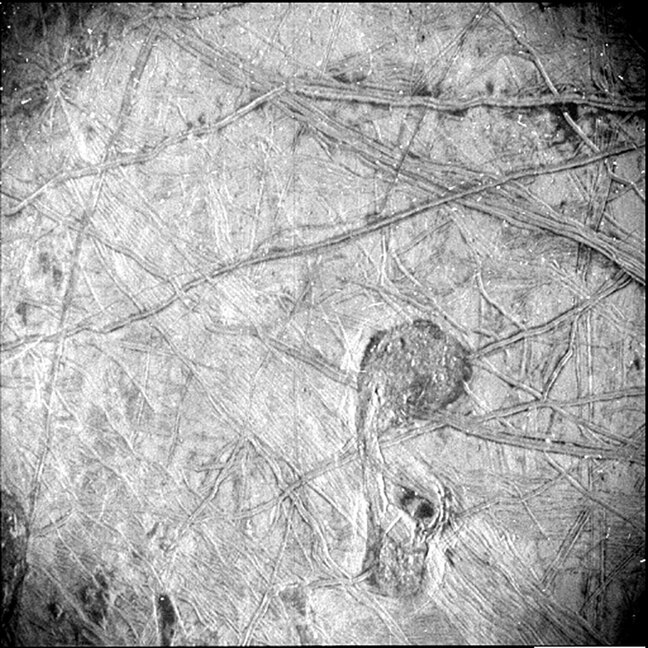 The image captures about 93 miles (150 kilometers) by 125 miles (200 kilometers), bringing into awesome focus the network of ridges and grooves that crisscross the moon. NASA reckons the dark stains to the upper right and below center are indications of surface eruptions, and the feature resembling a musical quarter note measures 42 miles (67 kilometers) north-south by 23 miles (37 kilometers) east-west.

"The white dots in the image are signatures of penetrating high-energy particles from the severe radiation environment around the moon," NASA added.

The black-and-white photo was taken with Juno's Stellar Reference Unit (SRU), a star camera used to orient the spacecraft, at a distance of 256 miles (412 kilometers). The camera's resolution ranges from 840 to 1,115 feet (256 to 340 meters) per pixel. The snap was shot as Juno zipped past the nighttime region at 15 miles per second (24 kilometers per second), though "Jupiter shine" – sunlight reflected off Jupiter's clouds – cast a dim light on the terrain.

Low light is where the SRU excels. The hardware has discovered shallow lightning in Jupiter's atmosphere and glimpsed the gas giant's ring system since the probe arrived in polar orbit in 2016.

"This image is unlocking an incredible level of detail in a region not previously imaged at such resolution and under such revealing illumination conditions," said Heidi Becker, the lead co-investigator for the SRU. "The team's use of a star-tracker camera for science is a great example of Juno's groundbreaking capabilities. These features are so intriguing. Understanding how they formed – and how they connect to Europa's history – informs us about internal and external processes shaping the icy crust."

The image is further justification for NASA's upcoming Europa Clipper mission, which is due to launch October 2024. The spacecraft will take gather detailed measurements to investigate the moon's habitability, though NASA notes: "Europa Clipper is not a life detection mission – its main science goal is to determine whether there are places below Europa's surface that could support life."

Meanwhile, the agency has hailed its community of "citizen scientists" who have helped process raw imagery generated by JunoCam, the probe's "public-engagement camera," during the September 29 flyby. NASA described this work as "not only awe-inspiring, but also worthy of further scientific scrutiny." 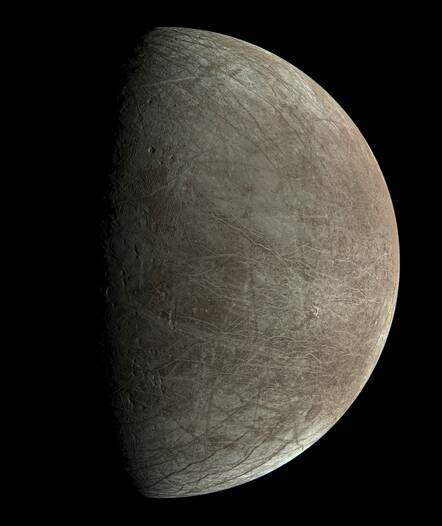 "Starting with our flyby of Earth back in 2013, Juno citizen scientists have been invaluable in processing the numerous images we get with Juno," said Scott Bolton, Juno principal investigator from the Southwest Research Center in San Antonio. "During each flyby of Jupiter, and now its moons, their work provides a perspective that draws upon both science and art. They are a crucial part of our team, leading the way by using our images for new discoveries. These latest images from Europa do just that, pointing us to surface features that reveal details on how Europa works and what might be lurking both on top of the ice and below."

Though the scientific value of such processing should be obvious, some efforts were a little bit, shall we say, psychedelic.

Juno was launched in 2011 and took five years to reach the solar system's largest planet, which, with its 80 moons, is like a miniature solar system itself. The probe continues to make discoveries about Jupiter and its satellites in its extended mission, which will last till September 2025 or whenever the spacecraft stops functioning. ®