… Including virtual machines as well as physical ones

Before you point out that all modern computers can boot from USB – the boot managers also work well in virtual machines, where USB boot support is still a lot rarer. Yes, of course, you can virtually "insert" an ISO file into your VM's virtual CD-ROM, but if you want to boot a VM from a real physical USB key, it's not so easy.

The programs are tiny: they fit onto a single floppy disk (even a 720kB one), and the ISO image is about half a megabyte. 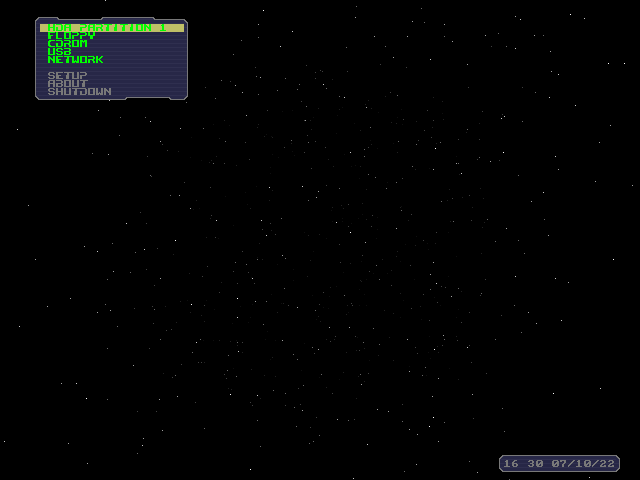 Plop Boot Manager 5: all right, the font and the starfield are a bit 1980s, but the functionality can be very handy.

Boot PBM5, and it presents a menu, allowing you to boot the real target OS on the machine from a floppy, or from a CD-ROM, or from USB. None of this uses the PC's BIOS, so it doesn't matter if the firmware is blissfully unaware of the existence of these media.

Optionally, the boot manager can be installed directly onto your PC's hard disk, in which case it presents a list of partitions and will boot their contents. The still-unfinished PBM6 supports UEFI as well as BIOS systems. Intriguingly, the separate Plop VHD Loader can also boot some OSes directly from MS hypervisors' VHD virtual-disk files, without using a hypervisor or starting another other OS first.

As an example of what you might use this for: you can install a Linux distro directly onto a USB key, and then have a universal bootable drive that will run on almost any PC. It's easier and safer to create this inside a VM, and you don't run the risk of accidentally writing the bootloader to your main drive and ending up with a PC that won't boot unless the USB key is present. But most hypervisors still default to a legacy BIOS, and mostly, these can't boot from real, physical USB drives on the host. With PBM, they can.

It makes it easier to create the bootable drive in the first place, without the fuss of assigning that device as the VM's drive with the VBoxManage command's createrawvmdk option, which as the VirtualBox manual illustrates, is quite complicated and needs root permissions.

Speaking purely hypothetically, of course, if one were expecting to spend a lot of this winter in one's local library because one could no longer afford to heat one's home, this could be a handy way round time limits on the library PCs.

The original Plop Boot Manager, currently on version 5.15, and the new, still in development, PBM6 are freeware, but they're not open source. Saying that, though, both are free to use for both personal and commercial purposes. They also have a Linux-only relative, PlopKexec, which is fully open source.