No, no, hear us out, say boffins: Foot fungus to measure your walk

Four researchers at the Unconventional Computing Laboratory at the University of West England have enlisted fungi to measure how people walk.

"They exhibit sensing and responsive capabilities without requiring additional space (for support infrastructure) and external inputs (e.g., electrical power sources) to operate, using its own bioelectric activity. Fungal sensors offer increased biodegradability, they are self-sustainable as they can self-grow, self-repair and self-assemble, they are abundant and offer in situ low technology cultivation."

What's more, they say, fungi have low capital requirements for companies looking to build the hardware and can be scaled to allow customized insole production.

As if to demonstrate that, the boffins purchased their fungi – 200 grams of oyster mushroom grain spawn (sterilized grain cultured with mycelium, the root structure of mushrooms) – from Ann Miller's Specialty Mushrooms Ltd in the UK for a few pounds.

The fungal starter was added to a multi-layered, absorbent, capillary action matting made of non-toxic wool and acrylic fibers, sprayed with deionized water, and placed on a spawn bed to grow. After about three weeks in a dark, moist environment, the fungal insoles were ready. 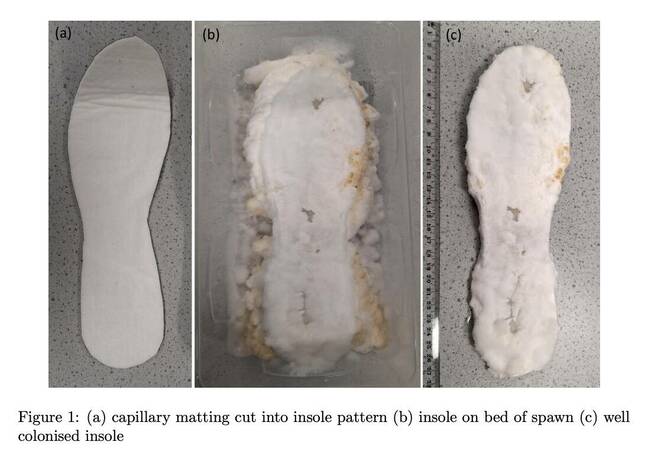 Installed in a custom mechanism rig designed to simulate walking, the insoles were evaluated for their ability to register weight and load distribution. Previous work has established that fungal colonies exhibit an electrical response when subjected to weight. This particular project aimed to assess the viability of fungal insoles for real-time measurements of posture, gait and activity.

And the fungi came through.

"Electrical activity (spiking) was recorded in mycelium bound composites fabricated into insoles," the paper says. "The number and periodicity of electrical spikes change when the mycelium is subjected to compressive loading."

"We have shown that it might be possible to discern the loading from the electrical response of the fungi to stimuli. The results advance the development of intelligent sensing insoles which are a building block towards more generic reactive fungal wearables."

The primary use case for fungal insoles would be for medical applications. However, corresponding author Anna Nikolaidou, senior lecturer in Architecture and Design and a member of the Unconventional Computing Lab at the University of the West of England, told The Register that other uses are possible.

"Awareness of foot activity might also be beneficial in various environments such as driving, working and in sports. In addition to this, fungal insoles can assess wellness-related mobility parameters," she said.

Were this work to be commercialized, there would be some marketing hurdles.

"Living insoles will need to stay humid, therefore the top challenge would be to persuade customers to wear always wet insoles," said Nikolaidou. "The longevity of the fungal insoles is dependent on moisture levels. Keeping the insoles wet and breathing without making customers' feet wet would be a significant barrier. A flexible, waterproof barrier between the bottom of feet and living mycelium (to keep feet dry) might lead to overcoming this challenge."

One of the supposed advantages of fungal insoles is that they don't need the battery pack of an electrically-based system like Nurvv Run. However, the prototype was wired to an ADC-24 Pico data logger. To allow for wireless monitoring, the production model would need to be connected to something like an Arduino board with a Wi-Fi module, said Nikolaidou.

As Arduino boards require battery power, fungal insoles currently don't appear to differ much from conventional smart insoles in terms of signal transmission components. But that may change as designs evolve.

And if not, there's always soup. ®