Dimorphos, described as a moonlet, orbits larger asteroid Didymos more than 11 million kilometres (6.8 million miles) away from Earth. Before DART struck Dimorphos on September 26, the moonlet circled its parent once every 11 hours and 55 minutes. Now its orbit is shorter and lasts 11 hours and 23 minutes; the collision has permanently altered its journey through space.

The mission was a first-of-its-kind test demonstrating how Earth-built machines can be used to deflect potentially hazardous asteroids one day, and marks the first time humanity has successfully shifted the orbit of an astronomical object. Telescopes around the world tracking Dimorphos' orbit around Didymos confirmed its trajectory had changed, NASA reported. 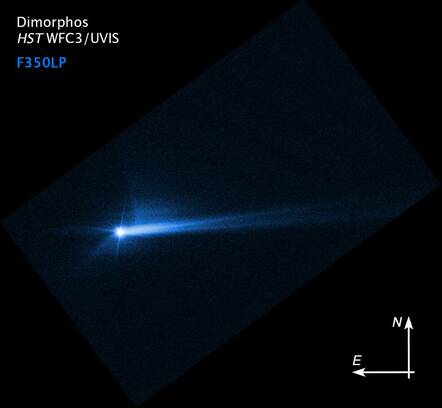 "We conducted humanity's first planetary defense test," NASA Administrator Bill Nelson said at a briefing on Tuesday. "And we showed the world that NASA is serious as a defender of this planet. We captured the attention of millions of people around the world in this test, and that's because DART felt like a movie plot. But this was not Hollywood."

Space agencies and laboratories around Earth have been working on planetary defense strategies and technologies for decades prior to this mission. Several near-Earth object monitoring programs were launched to detect asteroids potentially hazardous to our fragile home world and calculate the risk of a crash.

Diverting incoming killer space rocks looks like the best option to save our world from destruction, provided those asteroids are spotted and can be reached in time.

Tracking potentially dangerous asteroids whizzing through our galactic neighborhood is all well and good, though space agencies need to have the capabilities to keep Earth out of harm's way once a terror rock is identified. DART proves that kinetic impactors can successfully deflect asteroids and put them on a direction away from our skies.

Below is a video of DART prang with Dimorphos, captured by NASA's ATLAS asteroid early-warning system:

ATLAS observations of the DART spacecraft impact at Didymos! pic.twitter.com/26IKwB9VSo

Scientists hoped the DART collision would shorten Dimorphos' orbit by ten minutes, but it actually shortened it by 32 minutes. Nancy Chabot, the DART coordination lead at the Johns Hopkins Applied Physics Laboratory, said this result was within the range of possibilities predicted by models. She added that the deflection effect was enhanced due to Dimorphos shedding rocky material from its surface during impact. The debris ejected from the asteroid formed a tail (see above) measuring 10,000 kilometres (6,210 miles) long shortly afterwards.

"This is a four percent change in the orbital period of Dimorphos around Didymos, and it just gave it a small nudge," Chabot said. "But if you wanted to do this in the future, it could potentially work but you'd want to do it years in advance. Warning time is really key here in order to enable this sort of asteroid deflection to potentially be used in the future and as part of a much larger planetary defense strategy."

The European Space Agency will launch Hera, a separate mission sending a spacecraft and two cubesats to study the aftermath of DART's collision in closer detail in 2024.

"All of us have a responsibility to protect our own planet," Nelson added. "After all, it's the only one we have. And this mission shows that NASA is trying to be ready for whatever the universe throws at us." ®

Meanwhile, no one is thinking of the horrible emissions coming out of all these rockets, say scientists
Science6 Feb 2023 | 56