Who exactly asked for this? Can you explain how it works? Or why?

Poll Microsoft and Meta have teamed up in the metaverse, to bring the software giant's OS and productivity tools into The Social Network's Meta Quest virtual reality hardware.

The two internet giants today promised that in the future, Windows 365 will become available on Meta Quest devices, offering the chance to "stream a Windows Cloud PC including your personalized apps, content and settings."

That Cloud PC will be in your face – virtually and in a way literally – but how users will drive the machine was not explained other than with an illustration of a chap sitting in front of a mouse and keyboard. It's mysterious, given Meta's list of accessories does not include a keyboard.

Meta does offer controllers that can do the job of a mouse, and today announced a headset – the Quest Pro – that will include an eye tracker capable of interpreting facial expressions so they can be reproduced on your avatars in virtual spaces. But the tech specs for the device don't mention Bluetooth. The Qualcomm Snapdragon-powered device costs $1499, a sum that comfortably covers the cost of a conventional PC. 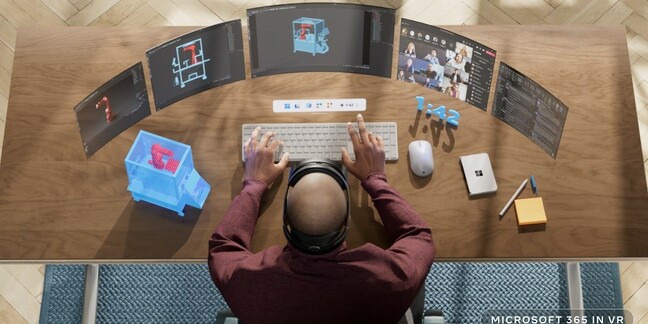 Meta boss Mark Zuckerberg said the Quest Pro matters because avatars that reflect your face make VR even more suitable for real-world collaboration. But he also said: "The feeling of presence you get from VR, even today, can be better than video chat."

So just why virtualizing your face makes sense is not entirely clear.

Neither Zuckerberg nor Microsoft CEO Satya Nadella – who appeared together in (irony alert) a split screen video – explained how one might use Windows or Office 365 in a headset.

Zuckerberg said: "With Microsoft 365 you will be able to interact with content from your favorite productivity apps."

Nadella enthused: "With Windows 365 you will have a chance to securely stream the Windows experience to the VR device with the full power of Windows and Windows applications."

Both CEOs spruiked using Microsoft Teams in VR – again without much detail beyond assertions that it will allow more powerful interactions than are possible when using other forms of collaborationware.

(Except maybe Zoom, given Meta has also teamed with the vid meeting giant and even announced that avatars in that environment will get arms and legs.)

If you decide this stuff makes sense in your organization, Microsoft promised it will support Meta Quest devices with Azure Active Directory and its Intune endpoint manager. Zuck chimed in with teasers of a VR for business subscription service from Meta, and news that Accenture has signed up "to help companies use VR to transform the way they engage employees, interact with customers, or create products and services in the metaverse."

Will yours be one of those companies? Let us know in the poll below. ®