Tuxedo OS 1 is Ubuntu 22.04, tweaked for the company's own kit, with KDE instead of GNOME, a natively packaged Firefox, and Flatpak instead of Snap.

As we mentioned when we covered the launch of Tuxedo's Pulse G2 laptop, the company has its own in-house rebuild of Ubuntu, as well as as a deployment tool called WebFAI. Now, it is releasing that custom distro to the general public, as Tuxedo OS 1.

German Linux PC vendor Tuxedo Computers may not be a household name – and we suspect System76 gets most of the limelight in the US – but where the Reg FOSS desk is located in Central Europe, its name pops up regularly, as a sponsor of openSUSE as well as various conferences and events.

In releasing its OS for general use on other companies' hardware, Tuxedo Computers is following in the footsteps of US vendor System76, which developed its own, customized version of Ubuntu and subsequently launched it as an independent distro, Pop!_OS.

The Reg FOSS desk was distinctly underwhelmed by Pop!_OS 21.10, which rendered our test laptop unbootable. Saying that, the following version, based on Ubuntu's latest LTS, was a much smoother ride. 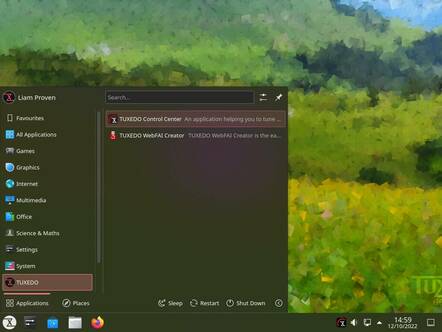 The default Tuxedo OS desktop is clean and simple… and yes, at 1024×768, the company's logo is cropped off at the corner

We tried Tuxedo OS in VirtualBox (both versions 6 and 7) and on hardware, and it must be said that, as with Pop!_OS 21.10, we encountered a few rough edges. 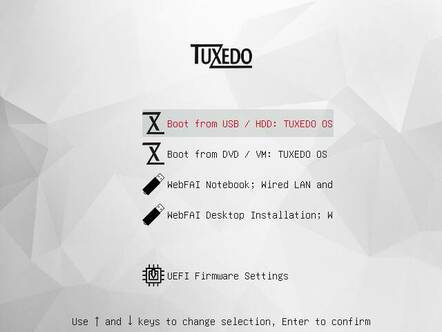 One is right on the boot menu. Most Linux distros display one of these, because sometimes certain features must be disabled in order to work on some hardware. The Tuxedo OS boot menu reads as follows:

We haven't abbreviated the text: at least in VirtualBox in its default BIOS mode, the menu entries are cut off as shown. On physical hardware, or using UEFI boot, more text is visible: 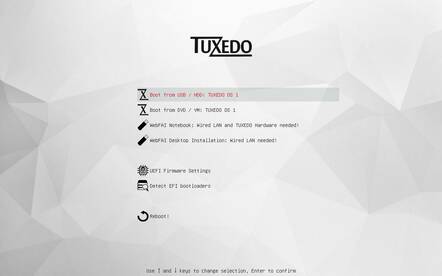 This leaves us with questions.

One is simply: what is the difference between the first two entries? To this vulture, "boot from USB" and "Boot from DVD" seem to indicate starting the computer from removable media, and "HDD" or "VM" from its internal disk, so we don't understand why they are two different entries. Naturally, we tried both. The first always fails to start for us, and leaves us at a (initramfs) prompt. The second entry actually starts the VM from the Tuxedo OS installation medium.

Worse, on our trusty test Thinkpad W520, both entries stop at the (initramfs) prompt, so we weren't able to install the distro on bare metal at all. For the record, it did start successfully on a UEFI machine, but as that had an OS installed already, we couldn't try it.

Additionally, on a BIOS machine, we feel that offering the choice of UEFI Firmware Settings is confusing. It doesn't work – if you select it, it throws an error: error: can't find command 'fwsetup'.

WebFAI is a custom Linux deployment tool – the name is short for Fully Automated Installation. This process needs a special USB key, which is provided by the company or you can make yourself, and a wired network connection. So far, so good; What we don't know is why its menu entries appear on the Tuxedo OS boot key, as WebFAI is a separate tool which can also deploy openSUSE, several Ubuntu remixes and Elementary OS. 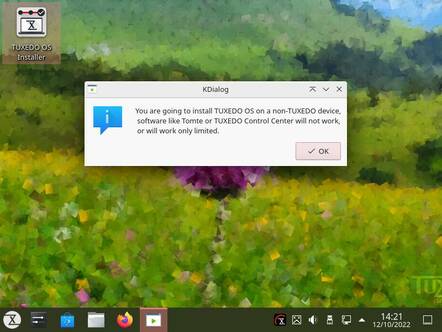 If you install Tuxedo OS 1 on your own kit, there's a warning that it will "work only limited"

Once installed, Tuxedo OS works perfectly well. It's Ubuntu 22.04.1, with KDE Plasma 5.24.6 instead of GNOME. The OS has Snap support completely removed, and Firefox is installed from a native Debian package. Flatpak is installed instead, but no Flatpaks are preloaded. The start menu has a Tuxedo group with two custom applications installed: Tuxedo Control Center, a system-monitoring app, and Tuxedo WebFAI Creator. The Control Center also runs as a panel applet by default, although you can easily turn it off.

Apart from these small additions, Tuxedo OS 1 is very similar to a default installation of Kubuntu, just with custom startup and shutdown screens and wallpaper. Just like with the first version of System76's distro that we tried, if you install it on a fairly modern UEFI computer as the only OS, we suspect that you won't see any problems. The glitches are mainly cosmetic, and forgiveable enough in a version 1.0 product.

If you don't care for Snap packages and prefer a more traditional Windows-like desktop to GNOME – both of which are perfectly reasonable choices – Tuxedo OS 1 seems like a solid option. ®