While many Ubuntu remixes just switch the desktop or replace a few default apps, Zinc changes some of the fundamentals. The result is impressive.

Teejeetech is a small computer consultancy in Kerala, India, run by programmer Tony George. Zinc isn't the company's first distro, nor is this the company's first mention on The Register. We previously mentioned their earlier Unity-based remix, U-Mix, as well as originally developing the Timeshift backup tool included in Linux Mint. We thought we'd come back for a proper look at Zinc, the company's second-generation distro.

Unlike U-Mix, Zinc is a free download. It's based on the current long-term support version of Xubuntu, 22.04.1, so it uses a customized Xfce desktop, plus quite a few additional apps and changed components. Perhaps its biggest change from mainstream Ubuntu is in packaging tools: it includes neither Canonical's own Snap format nor the GNOME/Red Hat alternative Flatpak.

This mean that Zinc includes a natively packaged version of Firefox, but that's true of several distros now. What is different is that Zinc offers several alternative packaging tools instead so that you probably won't find any need to install either Snap or Flatpak support.

For installing software from the Ubuntu repositories, Zinc has an improved command-line package manager called Nala, which we mentioned recently. Nala is a Python-based replacement for the apt command, which integrates some of the features of Fedora's dnf tool, such as parallel downloads and more readable output.

If you need proprietary freeware, Zinc also has deb-get. Created by Martin Wimpress, the founder of Ubuntu MATE, deb-get utilizes the fact that many software vendors offer native Debian packages. The program lets you install, update, and remove apps from a curated collection of software available as native packages, without managing APT repositories yourself. If there's a Debian format repository, deb-get will automatically add it for you, and the software will then get updated along with the rest of the OS. If there isn't a repo, deb-get installs it directly from the vendor's website, or from releases published on Github – and in that case, deb-get will update the program for you as well.

If the app you need isn't available as a native Debian package, Zinc also integrates support for the third cross-platform packaging format, AppImage, which we talked about when looking at containerized app formats last year. One of the boons of AppImage is that it works fine without any additional tools, but some do exist and Zinc is the first distro we've seen to build them in. If you download an AppImage file and open it, Zinc will offer to integrate it into the OS. If you say yes, it moves it to a dedicated directory and adds it to the OS's menus. If you don't want that, you can just run it.

Between nala, deb-get, and AppImage integration, there's little need for the bloat of Snaps and Flatpaks. 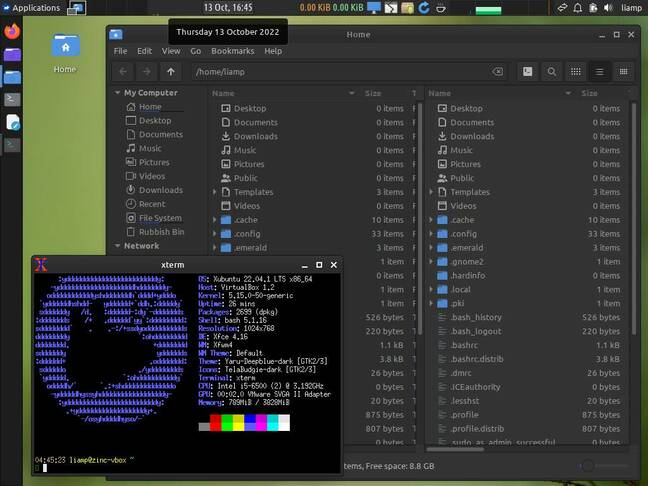 The desktop is a carefully tweaked setup of Xfce. It's superficially like Ubuntu's GNOME setup: there's a top panel with a central clock and status indicators on the right, plus a dock on the left which acts as an app launcher and switcher, which uses DockBarX. The top panel has been configured with multiple extra indicators, including system load, memory, and network usage monitors, a virtual-desktop switcher, and tools to lock the screen, install updates, kill misbehaving apps, and the Caffeine applet to prevent the PC from going to sleep. It's a bit busy, but we will take this over GNOME's ultra minimalism any day.

There are two file managers installed by default: Xfce's standard Thunar, plus the Nemo file manager from the Cinnamon desktop, configured with an orthodox two-pane layout which reminded us of Total Commander.

Zinc also features components drawn from several other desktops, such as the Text Editor and System Monitor from GNOME 42 and the Atril document viewer from MATE. It has a few extra tools such as the MarkText Markdown editor, the Foliate ebook reader, and VLC for media playback. It's not any default collection of tools, and while some are unfamiliar, it gave us the impression of being carefully selected.

There are less visible tweaks under the hood as well. The default filesystem is Btrfs, with compression enabled and /home in its own subvolume. The terminal emulator is Terminator, and although the default shell is still Bash, it has an informative full color custom prompt. The installer is Calamares, as used by Lubuntu and several other distros.

For all these extras, the distro is quite lightweight. After a fresh boot, RAM usage at idle is 709MB, about the same as ordinary Ubuntu, and it uses just 6.9GB of disk space, lower than any official remix — although in part that's because it (optionally) creates a dedicated swap partition, rather than using a swap file like all the official Ubuntu remixes.

Although it's not one of the more famous Ubuntu-based distros, Zinc is among the most impressive we have seen. Teejeetech has several programs on its website as well as other distros, including some for the Raspberry Pi, for which it also offers performance-tuning tips. Zinc doesn't throw in all the company's extra tools, but it serves as a good demonstration and advert of proprietor Tony George's skills. ®