The company already sells penguin-infested laptops and desktops, but an x86 Linux fondleslab is new 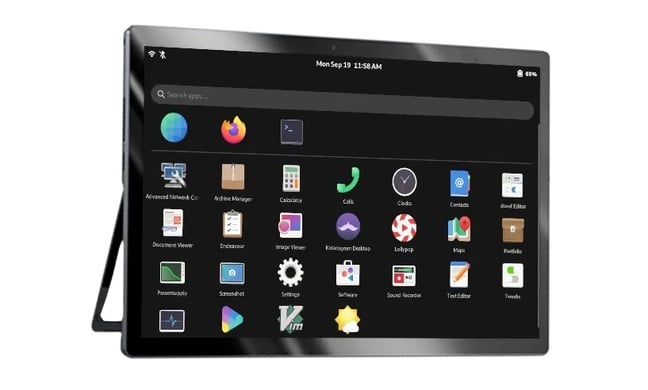 It's very likely that you'll be able to get lots of third-party keyboard cases and so on, though. This is a fairly common form-factor, and multiple similar devices are out there, such as the Chuwi Hi10 Go, which with 6GB of RAM and just 128GB of flash goes for about $239, or the Dere D10, which is closer to $500 but does come with a detachable magnetic keyboard and sports an RJ-45 socket.

These are just the first two such devices we came across when doing a search; there are doubtless many more. For the record, though, this vulture bought an older model of Chuwi tablet a few years ago, an Arm-based Hi9 Air, and for its spec it was superb value for money.

What's interesting about it, of course, and why The Reg FOSS desk is writing about it, is that it runs Linux. Specifically, it comes with Mobian, a mobile-oriented remix of Debian, which comes with the Phosh touchscreen GUI, based on GNOME and Wayland. We mentioned Phosh before when looking at postmarketOS. The Mobian wiki has more info about the project.

What's significant about this is two things. One is that the lower end of the x86 performance and power usage scale now overlaps that of more conventional, Arm-based devices. Several manufacturers tried to sell low-end Intel-based tablets based on Windows 8, and some of them could be picked up for a song fairly soon afterwards. (This, of course, is a sign of their commercial success, or lack thereof.) The snag was that many had so little storage that it was difficult even to upgrade their OS to a newer version. The other thing is that mainline, generic Linux can now usefully support such devices: the drivers and touch-oriented UIs exist.

What's also of note is that these inexpensive, generic devices that have been trickling out of OEMs in China for a few years now are rather better-equipped than Arm/Android-style devices. The Juno tablet, and the Chuwi and Dere ones, have both USB-3 and USB-C ports, as well as mini-HDMI and a slot for more storage. You can plug them into an off-the-shelf external hub and have a full-size screen, keyboard, mouse, and speakers. Unlike pretty much any Android tablet, this device can turn into a full desktop PC, or while on the move, with a couple of standard dongles and cables, you can interface it to just about anything.

As we explained when looking at Armbian early this year, supporting a third-party OS on an Arm device is not trivial. The Arm market doesn't have standard firmware, for instance, but x86 kit does. An Intel tablet is just a low-end PC, and as such it's almost infinitely more versatile.

Tablet sales continue to slide this year, as they did five years ago and indeed were already doing in 2015. Which is a pity as we predicted that Linux tablets were coming in 2010, although things were looking less confident by a decade ago.

Still, Arm tablets are by nature very limited. They are nothing but tablets, and even projects like Armbian and postmarketOS are limited by what the hardware can do. x86 tablets have no such limitations. You won't get far running Windows in a VM on a Celeron with 8 gigs of RAM, but it will run WINE perfectly fine. ®