And would you believe it, employees are not thrilled

Exclusive IBM Consulting on Tuesday issued a policy telling US employees located near IBM or client offices that they are expected to be in the office at least three days a week.

The directive has not gone over well.

Employees responding to the revised work rules on IBM's Fishbowl app, used for internal discussions, speculate the IT giant is, as one worker put it, "creating voluntary attrition so they don't have to RA." That's Resource Action, IBM's euphemism for a layoff.

The Register has seen and reviewed copies of these Fishbowl threads. In one message, a staffer wrote: "These bozos just cannot stop signing leases. They need to accept it, nobody wants to commute to an office and sit there for ten hours to justify managerial roles and sit in meetings all day."

"Maybe this mandate is so that IBM does not have to do layoffs with severance pay – people just leave on their own?" asked another.

IBM Consulting SVP John Granger explained the back-to-your-office-desks policy in a video for workers, which was accompanied by an explanatory memo, a portion of which we present below.

"We want to address the pent-up demand that we see coming out of the pandemic because we see some of what we lost in a remote only world. We know coming together in-person can spark ideas, the innovative thinking that we're known for, and tacit learning for the next generation of consultants by working together with more experienced colleagues. In person time is also about creating trust and building long-term relationships with clients."

The policy applies to employees who live "near an IBM office," however that's defined. Fully remote employees – those designated "work-from-home" or "mobile" – are exempt though they are encouraged to visit an IBM office to "strengthen relationships, promote learning, and spark ideas."

Another question in the memo asks, "I know John [Granger] said he expects people to return to a client or employee workplace whenever possible, will I be penalized if I'm not able to go into the workplace due to childcare; adult care; a recent move, etc?"

"No, you will not be penalized, we understand the importance of balancing both your work and home life as we move to a hybrid work model," reads the answer. 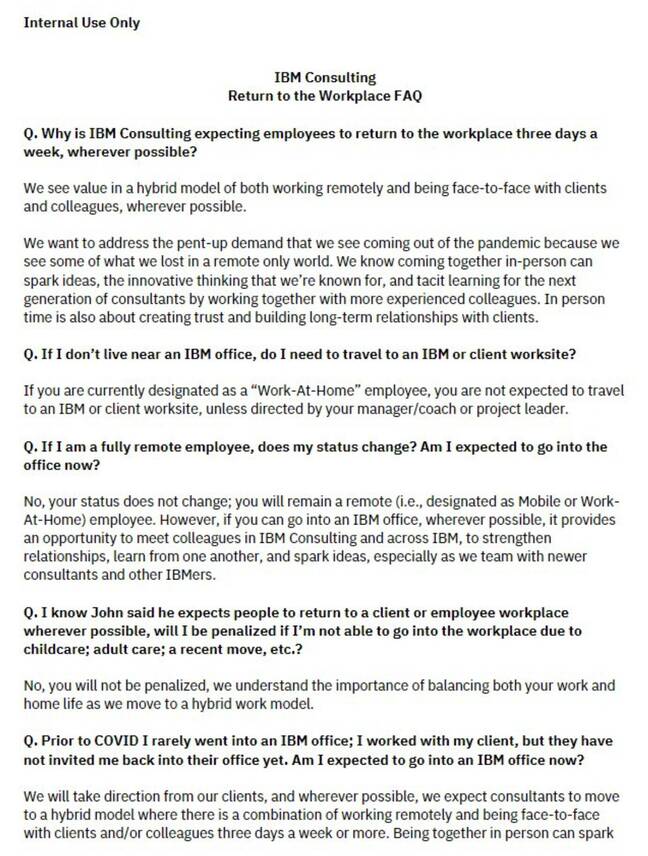 IBM in 2008 published research suggesting telecommuting workers were 10 to 20 percent more productive than office workers. Studies have found other benefits associated with remote or flexible work, such as reduced cost to employers, reduced commuter pollution, lower job attrition, and willingness to work longer hours, balanced by downsides, such as increased loneliness.

The corporate effort to encourage, pressure, or force workers to abandon remote or flexible work arrangements adopted with the onset of the COVID-19 pandemic is well underway. Companies need to justify costly office space, not to mention managerial salaries. So they have been trying to bring employees back into office settings, with the blessing of cities that would prefer not to deal with the economic consequences of depopulated downtowns.

Apple, after a false start in May, told employees to be in the office at least three days a week by September 5. Comcast issued a similar order effective September 12. Peloton, after layoffs, asked workers to resume a three-day in-office schedule on September 6, with a compliance deadline of November 14.

Building security firm Kastle, which tracks office occupancy via employee entry badges, says office occupancy has been rising steadily and reached 49 percent this week in America, up from about an average of about 25 percent two years ago.

Withdrawal of remote work arrangements, however, tends to prompt protest from those seeing reduced freedom and higher commute costs. What's more, some see in-office mandates as a way to encourage employees to quit, so companies don't have to conduct layoffs and pay severance.

When IBM in 2017 told remote workers they had to come into one of six office hubs, the mainframe titan insisted it was not a stealth effort to cut costs and slash staff, but that was not the opinion of affected workers.

In age discrimination cases workers have brought against Big Blue, there have been claims that relocation requirements disproportionately led to the attrition of older workers who were less willing to uproot themselves to be near company offices. One of the IBM internal slides submitted in evidence in Langley v. IBM suggested the corporation's effort to reduce remote workers and bring staff into central office hubs was part of its effort to correct its "seniority mix."

From what The Register has seen of the Fishbowl discussion about the new policy, at least some IBM employees are skeptical of the company's motives. Two of the posts we've seen speculate that the internal endorsements of the policy are the product of managerial "astroturfing" or bots.

"90 percent of the comments" on IBM Consulting's internal communications about the changes, "look as if they were written by bots," said one staffer on Fishbowl. "Notice how all the comments are extremely positive at this point, and most only from VPs and senior partners," said another. "I guess they received a direction to comment."

IBM did not wish to comment. It disclosed its latest quarterly financial results today, indicating it beat expectations in Q3 with revenue of $14.1 billion (up six percent year-on-year). Big Blue managed to turn that into a $3.2 billion net loss for the three months to September 30. ®

The tech press should expose the truth. Is there something you want us to report? Contact our investigative staff in confidence. We bite the hand that feeds IT.

Poll Wish you could IP Freely? What's the wording holding you back in your current job?
On-Prem3 Feb 2023 | 112