NASA's long-serving Curiosity Mars rover has finally reached an objective it has been ambling toward since landing on the red planet a decade ago: the "sulfate-bearing unit" of Mount Sharp.

The region was first spotted by the Mars Reconnaissance Orbiter, which has been studying the Gale Crater region of Mars since 2006. NASA flagged the area for investigation because of a high concentration of salty minerals that suggests it was once covered in water.

"Soon after arriving, the rover discovered a diverse array of rock types and signs of past water," NASA said. Among the signs were "popcorn-textured nodules" and minerals including magnesium sulfate (epsom salts), calcium sulfate (gypsum), and sodium chloride (table salt).

Curiosity found the minerals by drilling into a rock NASA named "Canaima" in the sulfate-bearing unit, which NASA said initially gave them trouble over concerns that it was too hard. Trying to break it could have further damaged the rover's arm due to worn brakes after taking 35 prior drill samples, though the team said it turned out to be easier to pulverize than they initially thought. 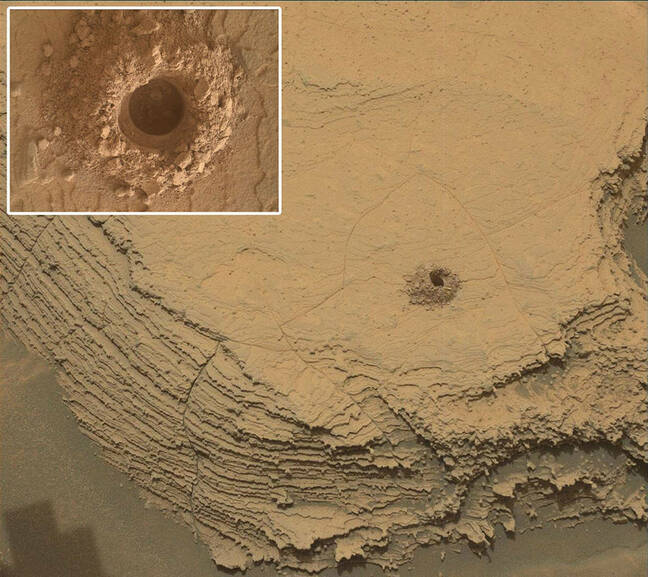 Curiosity's drill hole made in Canaima

Curiosity has had its sights set on Mount Sharp since landing on Mars in 2012. The three-mile (5km) mountain has appeared in Curiosity's photos from the Martian surface for years, and in 2020 NASA began highlighting the rover's journey up the mountain to the sulfate site.

By June, Curiosity was getting close, but still had to pass through the narrow "Paraitepuy Pass," where its pilots had to deal with hills that intermittently blocked Curiosity's signal to orbiting satellites. Curiosity escaped the pass without damage, and with a set of photographs Curiosity's science operations director described as awe-inspiring.

"The sand ridges were gorgeous," Elena Amador-French said. "You see perfect little rover tracks on them. And the cliffs were beautiful – we got really close to the walls."

Paraitepuy Pass, a treacherous region Curiosity had to recently navigate

NASA hopes that its research in the sulfate-rich unit will provide additional clues as to how Mars dried up and turned into the barren wasteland we now believe it to be. Curiosity found evidence earlier this year that methane-producing life may have existed on Mars, and in the meantime simulations of Mars' environment may have provided a hypothesis that Curiosity can at least contribute to solving.

Research led by the University of Arizona recently found that Mars' environment may have been just different enough from Earth's such that early life – particularly the sort that belches methane – could have cooled the planet by removing too much hydrogen, thinning the atmosphere and causing Mars to turn into the inhospitable world we know today.

NASA plans to spend the next few years exploring the sulfate-rich area, and already has new research targets in mind for Curiosity's next stops. ®