Located 580 light-years away from Earth in the constellation of Auriga the Charioteer, there lies an extra fluffy exoplanet with an average density similar to a marshmallow, light enough to float on water.

The planet, code-named TOI-3757 b, is the lowest-density planet found around a red dwarf star yet, according to a study published in The Astrophysical Journal. With an average density of just 0.27 grams per cubic centimetre, TOI-3757 b has a density less than half of Saturn and about a quarter the density of water.

The Jupiter-sized gas giant would, theoretically, float in a bathtub of water – if the tub were large enough for the planet's 150,000-kilometre (100,000-mile) diameter. A large team of boffins calculated the exoplanet's density by poring over data collected by ground-based and space telescopes. 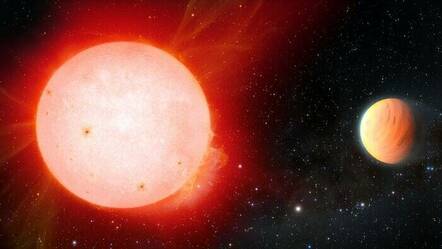 "We used data from NASA's TESS mission and the Red Buttes Observatory which gave us its size," Shubham Kanodia, first author of the paper and a researcher at Carnegie Institution for Science's Earth and Planets Laboratory, told The Register.

The mass of the planet – about a quarter of Jupiter or 85 times the mass of the Earth – was estimated from observations gathered by the WIYN 3.5-metre Telescope at the Kitt Peak National Observatory in Arizona.

"Giant planets around red dwarf stars have traditionally been thought to be hard to form," Kanodia said in a statement. "So far this has only been looked at with small samples from Doppler surveys, which typically have found giant planets further away from these red dwarf stars. Until now we have not had a large enough sample of planets to find close-in gas planets in a robust manner."

TOI-3757 b has other strange properties that could help scientists understand how these types of planets may form around aging red dwarf stars, including its low metallic content and its slightly eccentric orbit. The team believes its lack of heavy elements means a rocky core may have formed more slowly and failed to accrete as much gas compared to other planets, making it less dense.

The alien world lies close to its parent star, completing an orbit in just 3.5 days. It's possible that it absorbs more heat from the star at certain points in its orbit, causing its atmosphere to puff up. "I think the things that make the planet peculiar from different angles are what make it interesting to study, as these features could offer clues on its formation and emission," Kanodia told us.

The team hopes to observe the planet in closer detail, possibly using NASA's James Webb Space Telescope to study its atmosphere in greater detail. Studying unlikely worlds like TOI-3757 b can help astronomers understand the different ways planets can form. ®