Works well, but selection of available apps is meagre

First Look Microsoft has decided the Windows Subsystem for Android (WSA) – its offering that runs Android VMs which behave just like another application in Windows – is sufficiently stable that it can be designated version 1.0 and made available to all.

Microsoft appears not to have made an official announcement about the product's availability beyond the tweet below from Cory Hendrixson, who served as development manager for the project.

Windows Subsystem for Android is officially v1. 31 markets and over 50,000 apps! The amazing thing is just how pedestrian it is to run these apps. They feel like running a normal windows app... WAPost, Kindle Reader (on my SurfaceGo3), and Subway surfer are my favs. pic.twitter.com/jBu1KkMqFj

While it's lovely that Windows can now run Android VMs, Hendrixson's tweet needs a little parsing. The "50,000 apps" he mentions are only available from the Amazon.com app store – not the larger Google Play digital tat bazaar. Google's apps aren't in the Amazonian store, nor are Microsoft's. I couldn't find Twitter, WhatsApp, Slack, any of the banks I use, or the Australian government apps I need to access services. In fact it's tough work to find apps other than games in the store – and when a search term does bear fruit it delivers what look like knockoff apps that scream "here be dragons."

There's always BlueStacks for Android gaming on PCs, by the way.

The absence of an official announcement is also a little perturbing, because Microsoft on Thursday published news of an update to the Subsystem for the Windows Insider and Beta channels. That version is numbered 2209.40000.26.0, but the version of the Subsystem that downloaded when I tested the product is numbered 2207.40000.8.0 – which feels like it's probably an earlier version.

The Register took the Subsystem for a spin on a 6th-gen Lenovo ThinkPad Carbon powered by a Core i5 8250 at 1.6GHz and packing 8GB of RAM. Installing WSA is very easily accomplished by using the Microsoft Store to install the Amazon app store as a Windows application.

Doing so sees Windows guide you through the installation of the Subsystem and perform some background footling to ensure Windows 11 is ready to run virtual machines. After a few minutes of work Windows reboots and you're ready to run WSA, which booted unbidden a few seconds later.

Once you acquire an app from the Amazon app store, it appears in Windows as just another app. And once you run it, it behaves just like any other app.

I had an inconsistent experience with the Subsystem. I decided to test it with Angry Birds – an utterly familiar app that relies on touch screens and shouldn't tax a PC. Here's how it appeared on my first run.

I later tweaked the WSA settings to better recognize keyboard input, but my choices grayed out until only forced auto-resizing remained. That act, strangely, resulted in a larger and faster Angry Birds that looked like this. 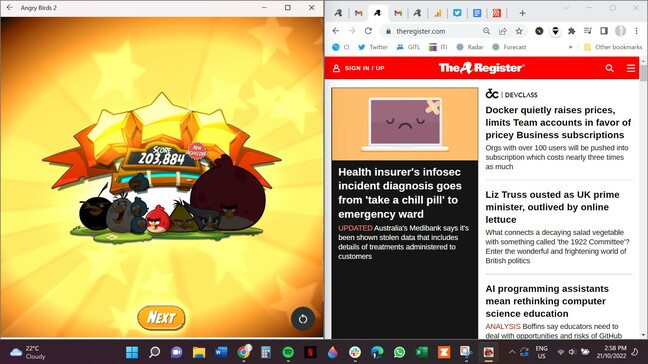 Microsoft's advice to developers suggests the WSA is an ideal way to target Windows users with code written for Android. But it notes that many things may need to change before an app behaves well on the desktop OS. Code that assumes touch input, for example, may not deliver a great user experience when used with mouse and keyboard.

Your correspondent's brief experience with the product suggests those caveats are needed. As are more useful apps, so that WSA becomes relevant for a wider audience beyond casual gamers. As things stand WSA will, if nothing else, offer developers who work on Windows PCs a handy way to test their work.

Speaking of developers, WSA has a GitHub page here. ®