Apple devotees now have another reason to dump hundreds of dollars into the iGiant's ecosystem with the release of the Level Lock+, an exterior door lock that can be operated by an iPhone or Apple Watch.

In partnership with Level, a company that seems to have made the ancient mechanism of locks "cool," Apple is flogging the devices for $329.95.

Powered by the same NFC (near-field communication) technology behind the iPhone's Pay and Wallet functions, users are able to gain access and lock their door with a simple tap of an iPhone or Apple Watch, just as how you'd pay for goods in a store. 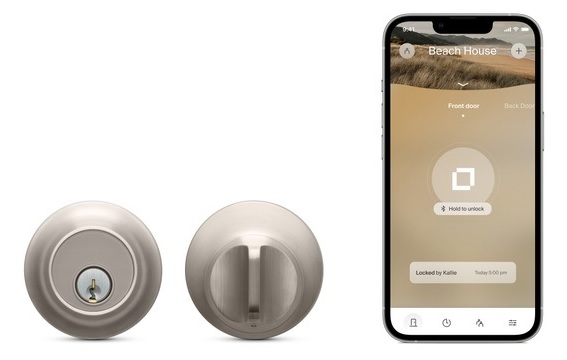 Level Lock+ is another step in Apple's quest to "digitize all the things" – including bank cards and travel tickets. The ability to digitize a home key was first announced in 2021, and now here we are. Home keys can be added to the Apple Wallet through the Home app, the hub where Apple's "smart home" kit can be administered.

The Apple Pay system works incredibly well, as do its Android equivalents, and it's liberating to be able to leave home without a crumbling and overstuffed wallet (until somewhere needs cash or doesn't support the spec). Since physical bank cards also use NFC, if your wallet was pinched, the thief could go on a shopping spree until you cancel your cards. If your iPhone were stolen, Apple's Face ID would render it an expensive brick to unauthorized users.

Leaving your keys at home, including car keys, would be even better, yet it's clearly another attempt by the world's most valuable tech company to make the iPhone ever more important to its owner by taking some responsibility for the security of their home.

It's not 100 percent lock-in (if you'll excuse the pun) since the Level Lock+ clearly shows a low-tech key slot – but if you were to lose your phone and didn't have that physical key on you or hidden somewhere else, you'd be a bit screwed.

Handing the security of one's home and belongings almost entirely to Apple should be approached with caution, although many enthusiasts will likely be champing at the bit to have the Level Lock+ installed.

Apple Pay, for example, is not without flaws. Last year, researchers at the Universities of Surrey and Birmingham found that Visa cards linked to the service could be exploited to steal money using off-the-shelf equipment.

They did this by imitating the signal from a transport terminal, which exploited Apple Pay's Express Travel function – causing the phone to make payments without authentication. The researchers were technically able to drain bank accounts under the right conditions. Protections like Face ID aren't immune to spoofing either.

Could miscreants exploit Level Lock+ by perhaps copying a house key signal? Our bet is that people are working on it right now. ®