Ancient microbes on Mars could survive up to 280 million years if they are resistant to radiation and left buried underneath the ground in frozen, moist conditions, according to a study published on Tuesday.

Mars is a difficult planet to survive. Lacking a magnetic field, it cannot shield its surface from harsh cosmic radiation or prevent liquid water evaporating from its surface. If Mars did harbor life in the past, it would be nothing short of a miracle for astronauts to discover live samples. The best chance of finding these hypothetical microbes would be to look below the planet's surface.

Buried beneath the Martian regolith, these alien microorganisms are protected from radiation and could lie dormant and survive for hundreds of millions of years if they are anything like Deinococcus radiodurans, one of the hardiest species of bacteria found on Earth. Nicknamed "Conan the Bacterium," the microbe is particularly resistant to radiation and can survive with little oxygen under cold, dry temperatures. 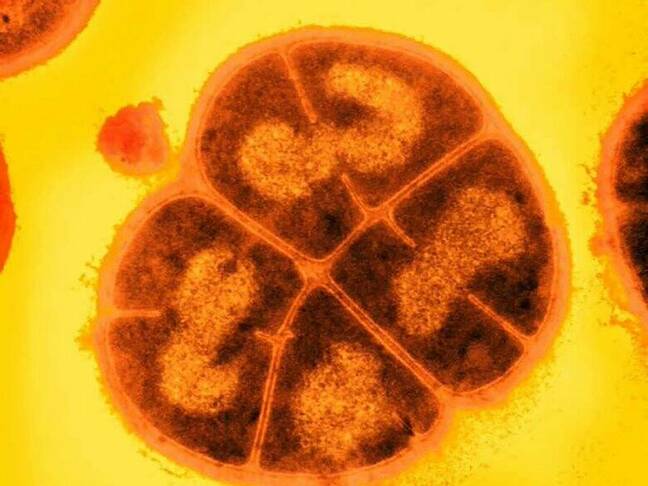 A sample of Deinococcus radiodurans, a species known as Conan the Bacterium. Image Credit: Michael Daly/USU

A team of scientists performed radiation experiments on six different types of frozen bacteria and fungi, zapping the samples with gamma rays to mimic conditions on Mars. They discovered Conan the Bacterium could withstand 140,000 grays of radiation, an amount 28,000 times more than the lethal dose for a human. If the bacterium lurks just ten centimeters below the surface, it could survive up to 1.5 million years and if it is pushed down to ten meters, it could survive up to 280 million years, the researchers estimated. The results were published in the Astrobiology journal.

Other environmental constraints like moisture are also required to keep microbes alive. Liquid water is believed to have disappeared from Mars billions of years ago. Other processes like meteorite impacts could melt water ice in its soil to keep the cells hydrated, explained Michael Daly, a professor of pathology at Uniformed Services University of the Health Sciences (USU), who led the study.

"Although D. radiodurans buried in the Martian subsurface could not survive dormant for the estimated 2 to 2.5 billion years since flowing water disappeared on Mars, such Martian environments are regularly altered and melted by meteorite impacts," he said in a statement.

"We suggest that periodic melting could allow intermittent repopulation and dispersal. Also, if Martian life ever existed, even if viable lifeforms are not now present on Mars, their macromolecules and viruses would survive much, much longer. That strengthens the probability that, if life ever evolved on Mars, this will be revealed in future missions."

The study's results, however, also show that if astronauts or spacecraft were to contaminate Mars with Earth's bacteria or fungi, these samples could, in theory, survive and lurk on Mars for up to hundreds millions of years.

"We concluded that terrestrial contamination on Mars would essentially be permanent – over timeframes of thousands of years," said Brian Hoffman,  a senior co-author of the paper and a professor of chemistry and molecular sciences at Northwestern University. "This could complicate scientific efforts to look for Martian life. Likewise, if microbes evolved on Mars, they could be capable of surviving until present day. That means returning Mars samples could contaminate Earth." ®