They're tidy, speedy, small – and wall off your working life

Desktop Tourism I was recently given a desktop computer, and the modest machine is the most fun I've had during my year of Desktop Tourism – the project that's seen me trial all kinds of weird and normal client devices each month since March 2022.

The machine is a Maxtang NX6412 – a Chinese brand – powered by a humble quad-core 10nm Intel Celeron with a 1.5MB L2 Cache that zips along at up to 2.6GHz. The box can be found sold as a bare bones affair for around $300; your mileage may vary, depending on where you shop. I acquired a 256GB SSD, 8GB RAM, a USB-A Wi-Fi and Bluetooth dongle, and a gray market Windows license, for under $80.

The computer more than suffices for my everyday surfing, typing, streaming video or audio, and cranking out some kms in the cycling metaverse Zwift.

I expect that level of performance from any PC these days. And yes, there may be better deals out there for NUCs, some using Intel Core and AMD Ryzen processors. But I did wonder how this Celeron Maxtang would fare, and found it was fine. 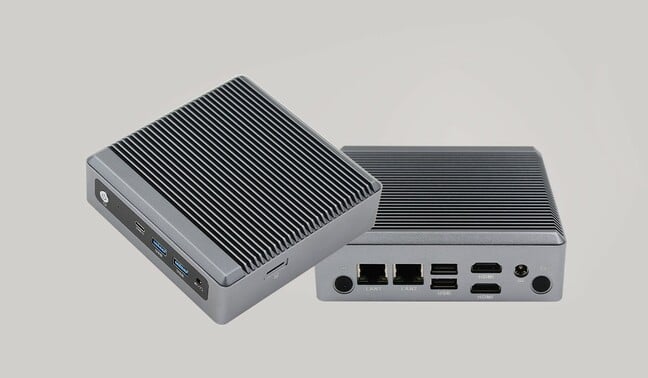 Where this one shines is its impressive array of ports out the back: twin HDMIs, a pair of USB-A 2.0 outlets, plus twin RJ-45s. I snuck an old USB hub into one of the USB-A ports and connected all the stuff I find myself swapping in and out of my laptop – webcam, proper microphone, USB speaker and a Logitech wireless input device connector – and then just let them dangle out of sight.

The devices are connected 24/7 and all their cables are tucked away behind the computer and under my monitor stand. My desk is tidier than it's been for years.

With one exception: a blue HDMI to DisplayPort cable (which I have no recollection of acquiring) that snakes a short distance from the PC's second HDMI port to drive an ancient Dell 13" LCD monitor (that I do recall acquiring in 2002 or 2003) and which now offers an extra 1024x768 of desktop real estate. 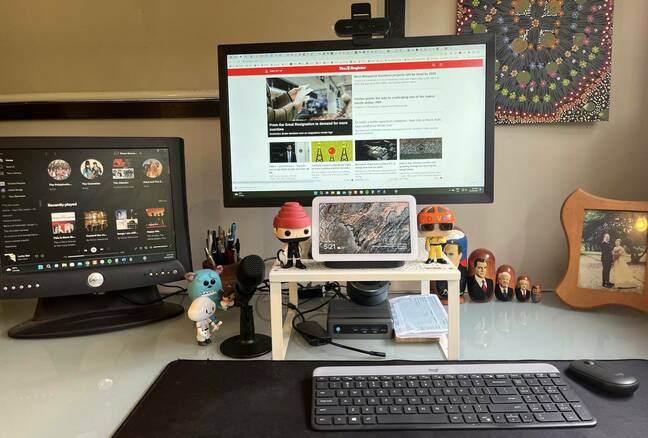 I'm loving this setup because I use laptops' displays as a secondary screen and therefore must string numerous cables across the desk to reach their small collection of ports. My desktop just sits under my monitor stand with everything connected and I never need to forage for cables or devices. None of the peripherals I use require the front-mounted USB 3.0 ports.

Yes, I could acquire a dock or port replicator and achieve a similarly neat setup for a laptop. But such devices cost about as much as the desktop I'm now enjoying and are often tied to a particular brand of laptop.

A port replicator or dock would also leave the laptop free to roam, which I've decided I don’t want.

Desktop tourism? PCs and alternative devices have increasingly diversified into myriad and marvelous forms, so I've decided that in 2022 I'll use a different one each month – from the mainstream to the weird – and share the experience. Buy at your own risk: these aren't recommendations. This article is the latest part in this series.

When using a laptop in my home office, which is in a sturdy garden shed, I pack it up at the end of the day and bring it into the house where it tempts me to use it again for just one more email, or glance at The Register to make sure I didn't leave a typo on the front page.

Now that I have a desktop, my mindset has changed and I stay in the home office to complete a day's work and then make a mental and physical shift to domesticity (notwithstanding the fact I also use a smartphone, tablet, and e-reader each day).

My desktop setup is not a panacea. My slightly nasty workload test – downscaling five minutes of 4K video to HD with open source video conversion tool Handbrake – ran for 11:59. That's rather longer than on any other machine I've tested that's capable of the feat. The Maxtang does not enjoy running VMware Workstation: in an Ubuntu VM with 2GB of memory the downscaling test limped towards a predicted job time of 53:00, but on several test runs Handbrake decided that mysteriously quitting was preferable to finishing the job.

I also ran the free Cinebench rendering benchmark tool, which scored the machine at 1,581. The fastest system on the Cinebench charts scored 30,054 thanks to its 32-core AMD Threadripper at 3GHz.

A powerhouse this is not!

Where does the desktop belong?

The unexpected pleasure of using a desktop computer got me thinking about their role. Desktops hold about 20 percent of the PC market and as the graph below from Canalys shows, shipments of the machines have fallen more slowly than has been the case for laptops. 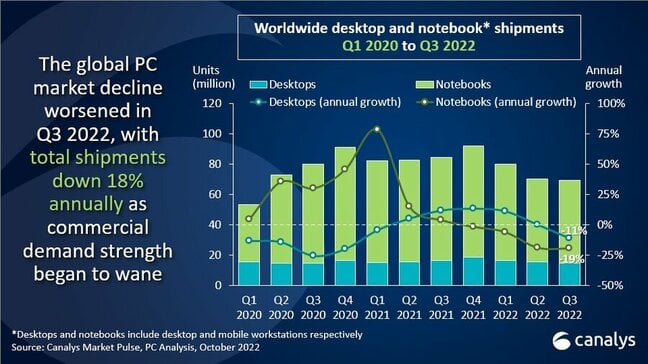 At a guess the desktop market has held up because there are lots of roles in which only a desktop will do. There's only so many GPUs, fans, and disks gamers and content creators can fit inside a laptop.

The Maxtang won't ever satisfy a gamer, CAD user, or developer who needs VMs to run crisply. But it is utterly capable of handling everyday productivity tasks.

The big incursion into the PC market in recent years has been just-good-enough laptops in the form of the Chromebook.

Maybe it's time to think about good-enough desktops too – especially now that hybrid work is a new normal. I'm often told that the two or three days a week of work from home that's now permissible for many workers demands tools tuned to these new circumstances. It's important to ensure people are as productive as possible now that the office is not an everyday destination.

By tidying up my workspace and freeing my laptop for when it's really needed, my mini-desktop is that tool. And I think it could be yours, too, if like me you are lucky enough to have a dedicated work from home space. ®