Won't somebody please think of the Cyberquad children?

Tesla's Cyberquad for Kids – a $1,900 mini-ATV that's the closest most people will get to a Cybertruck – has been recalled by US watchdogs over numerous safety issues.

The hazardous ride was unveiled during Tesla's Cyber Week in cyber 2021, and cyber sold out within cyber hours of being cyber available. 5,000 of the vehicles were manufactured by wagon maker Radio Flyer and sold exclusively by Tesla.

Neither Tesla nor Radio Flyer initiated this recall, which was put out by the US Consumer Product Safety Commission (CPSC) today. According to the CPSC, "the Cyberquad fails to comply with the federal mandatory safety standard requirements for youth ATVs," including having an incorrect suspension and maximum tire pressure.

Perhaps more damning for Tesla and Radio Flyer both is that the kiddie-quad lacked a CPSC-approved ATV action plan covering "rider training, dissemination of safety information, age recommendations, and other safety measures," which is mandatory for all ATV manufacturers and distributors. 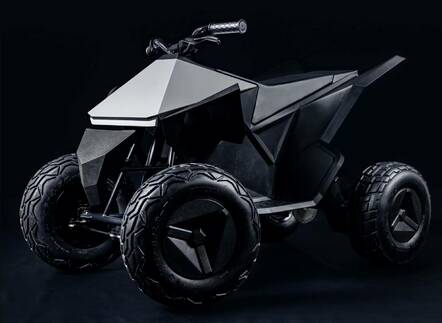 Cyberquad for Kids, we hardly knew ye ... What Tesla's ATV looked like

Luckily, the CPSC said that Radio Flyer only received a single injury report related to the child-size Cyberquad, in which an eight year old and 36 year old were riding a kid's Cyberquad that tipped over, "resulting in a bruised left shoulder."

At least the tiny one was real, once

The Cyberquad for Kids, with its 15-mile range and top speed of 10 miles per hour, was meant as a promotional followup to Tesla's larger Cyberquad ATV that was unveiled alongside its Cybertruck in 2019. The Cyberquad was touted as an optional Cybertruck accessory that could be charged in the bed of the vehicle.

The Cybertruck itself has been largely unseen since its somewhat disastrous unveiling in which Musk broke its windows while trying to show off how strong the glass was. Since then, the Cybertruck's production has been delayed multiple times, first to 2021, then 2022, and earlier this year it was pushed back again into 2023.

The Cyberquad, as an add-on to the Cybertruck, won't likely appear until the big machine does. Unfortunately for Tesla superfan "child" riders of the smaller version, it's either disable the vehicle for a refund – or don't, honestly.

Speaking of recalls, Tesla issued another one today, recalling around 24,000 Tesla Model 3 vehicles over a seatbelt issue that stemmed from prior servicing.

In a report [PDF] to the National Highway Traffic Safety Administration, Tesla said that prior servicing of "the second-row left seat belt buckle and center seat belt anchor" may have resulted in the parts being reassembled incorrectly.

Tesla said it caught 105 cases during investigations of the issue, but wishes to inspect more seat belt assemblies to be sure they weren't done incorrectly, too. ®