Instruments installed on the International Space Station to examine Earth's atmospheric dust have been found to have another useful purpose: detecting airborne methane plumes contributing to greenhouse gas emissions.

NASA's Earth surface Mineral dust source InvesTigation (EMIT ... seriously?) mission was installed on the ISS in July to measure mineral dust in Earth's atmosphere. America's space boffins have found the equipment can also track methane emissions and since then has managed to identify 50 "super emitters," usually operations in the fossil fuel, waste, and agricultural sectors that emit methane at high rates, around the world.

"It turns out that methane also has a spectral signature in the same wavelength range [of the instrument], and that's what has allowed us to be sensitive to methane," EMIT principal investigator Robert Green, of NASA's Jet Propulsion Laboratory (JPL) said at a press conference this week. 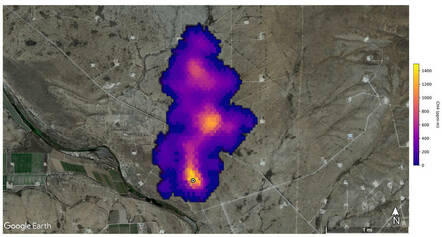 Methane is a powerful greenhouse gas that has the ability to trap up to 80 times the heat of fellow greenhouse gas carbon dioxide, NASA said. However, unlike carbon dioxide, which can potentially stay in the atmosphere for tens to hundreds of years, methane dissipates in about a decade, so cutting its emissions now could help a lot in mitigating near-term climate change.

"Reining in methane emissions is key to limiting global warming," said NASA administrator Bill Nelson. "EMIT is proving to be a critical tool in our toolbox to measure this potent greenhouse gas – and stop it at the source."

EMIT uses an imaging spectrometer, which measures changes in light reflections to determine the molecular content of the atmosphere. Similar equipment has been used in other NASA missions, including the James Webb Space Telescope, which is equipped with a spectrograph strong enough to detect carbon dioxide on an exoplanet.

Pointed at Earth, a spectrograph such as EMIT is able to do lots of stuff, such as study dust plumes, which NASA said also have the ability to cool or warm the planet. EMIT is focusing on figuring out which dusty regions of Earth are rich in iron particles or clay dust, which have the tendency to trap and repel heat, respectively. With that knowledge, NASA hopes to learn more about dust's effect on climate change.

Greenhouse gasses are a bit more of a pressing concern, though, especially in light of reports indicating we're nowhere near emissions reduction targets, and emissions are rising sharply. 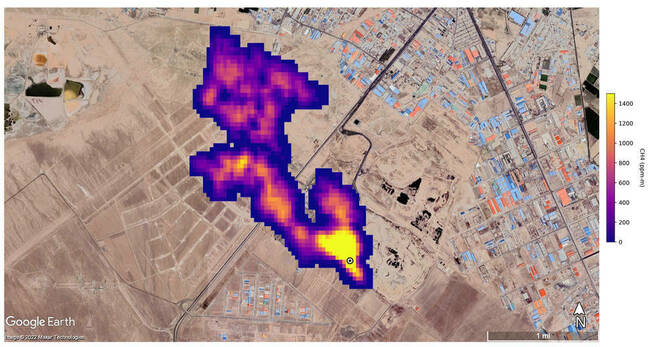 Andrew Thorpe, a NASA research technologist at JPL leading the EMIT methane project, said that the methane plumes EMIT has detected are some of the largest ever seen. "What we've found in just a short time already exceeds our expectations," Thorpe said.

NASA provided a few examples of the massive clouds it has detected, such as 12 methane plumes in Turkmenistan that stretch for more than 20 miles (32km). Another plume at a waste processing facility south of Tehran, Iran, emits a plume three miles (4.8km) long.

In the US, a two-mile (3.2km) plume has been spotted near Carlsbad, New Mexico, at the edge of the Permian Basin oil field. Combined, the outporings from the three locations emit around 77 metric tons of methane per hour. The International Energy Agency estimates the energy sector alone emits roughly 135 million tons of methane annually.

In January, the Biden administration announced the US Methane Emissions Reduction Action Plan, which would provide funds to cap old wells, along with providing assistance to minimize pipe leaks, reduce emissions from beef and dairy cows, improve emissions monitoring, and repurposing old fossil fuel infrastructure for new use.

The US government said that the action plan aims to reduce global methane emissions by 30 percent by 2030, not enough to meet the reduction needs of recent emissions forecasts.

Nelson said the agency wants to help stop methane emissions at their sources, but NASA didn't name any of the groups that may have been responsible for the massive plumes, even in New Mexico where the US government has the ability to step in. ®

Good luck blowing up a pile of rubble. Boffins suggest we'll need to create a diversion instead
Science25 Jan 2023 | 49