If new 3D models of Mars's surface are accurate, we finally possess the most convincing evidence to date that much of the northern hemisphere of Mars was once an ocean.

Scientists at Pennsylvania State University targeted a region known as Aeolis Dorsa, believed to have the densest collection of "fluvial ridges" that indicate the former presence of flowing water on Mars, at least according to 3D maps and models that show similarities in how sediments collect between the red planet and our own.

"Based on these findings, we know there had to have been a period when it was warm enough and the atmosphere was thick enough to support this much liquid water at one time," explains Penn State Assistant Professor of Geosciences and project lead Benjamin Cardenas.

Using software developed for NASA by the US Geological Survey (USGS), the team used overlapping satellite images of the region to create a 3D map of Aeolis Dorsa, itself a small feature of the Aeolis Quadrangle region of Mars that also includes the territory surveyed by NASA's Curiosity rover. Cardenas's team mapped some 6,500 kilometers (4,038 miles) of fluvial ridges in Aeolis Dorsa some 900 meters thick. 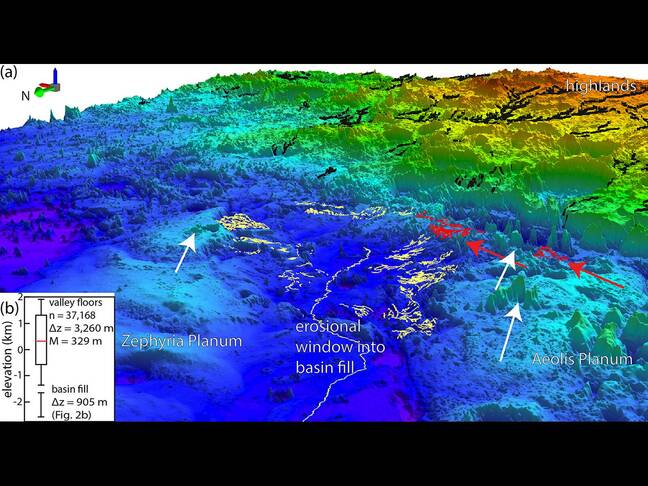 3D topographical models of the Aeolis Dorsa region of Mars

According to Cardenas, the rock formations and ridges in Aeolis Dorsa show that there was a lot of change happening in the region around 3.5 billion years ago. "It was dynamic. The sea level rose significantly. Rocks were being deposited along its basins at a fast rate," Cardenas said.

In a separate recorded interview, Cardenas said his 3D models revealed the hills and ridges in Aeolis Dorsa "are actually stacked-up river deltas." Those deltas are groupable into 20 different systems that show an extended period of sea level change allowing for the deposit of the aforementioned 900 meters of sediment. That degree of sea level change and sediment deposit is "consistent with a northern ocean on a warm and wet early Mars."

According to Cardenas, that means circumstances in Aeolis Dorsa may be the right place to start the search for early Martian life. Mars's southern highlands would have been continually feeding nutrient-rich sediment into the northern Martian ocean, and with its delta-like ridges it's likely Aeolis Dorsa was where surface water entered the larger sea, rich in sediment.

"If there were tides on ancient Mars, they would have been here, gently bringing in and out water. This is exactly the type of place where ancient Martian life could have evolved," Cardenas said.

Meanwhile, NASA's Curiosity rover is busily surveying the Gale Crater some 800 kilometers away from Aeolis Dorsa to look for signs that could point to why Mars became a barren wasteland while life prospered on Earth. Recent research has suggested that early Martian life may have devoured too much of Mars's atmosphere, causing it to cool and die.

We may now have a better idea where to look for said life, and it's practically in Curiosity's backyard. With a top speed of 0.09 kilometers per hour (0.05 mph), don't expect Curiosity to get there soon: it'd be a 370-day trip at top speed as the space crow flies if it even had plans to visit. ®